Copyright © 2022 Feng Xiong, et al. This is an open access article distributed under the Creative Commons Attribution License, which permits unrestricted use, distribution, and reproduction in any medium, provided the original work is properly cited.

This paper is about the active-passive isolation system based on single degree of freedom electromagnetic actuator and focuses on different control effect of different measure points. In view of this problem, the authors analyze the vibration characteristics of the active and passive vibration isolation systems of electromagnetic airbags under single and multi-vibration isolators. Then they decompose the rigid pedestal vibration into two orthogonal components, the vertical translation and the fix axis rotation. After that compare simulation and experiment results in terms of the control effect when the single active-passive isolator location varies. Finally, the authors draw a conclusion about the reason why the rigid pedestal vibration can be globally controlled by arranging more than 3 active-passive isolations and design a multiple isolator system experiment to verify.

This paper will analyze the vibration characteristics of the electromagnetic airbag active and passive vibration isolation system based on the rigid body structure with multiple degrees of freedom, and develop single and multiple isolators based on actuators that can only generate a single degree of freedom control force. The law of vibration transmission and control on rigid pedestal is verified. The results show that under the condition of rigid pedestal, the multi-degree-of-freedom vibration transmitted by isolator can be controlled by more than three single-degree-of-freedom actuators. 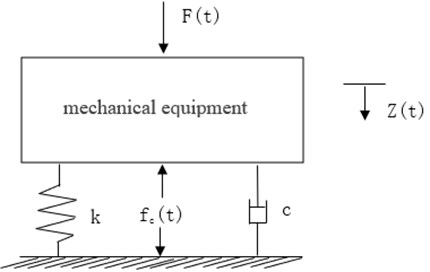 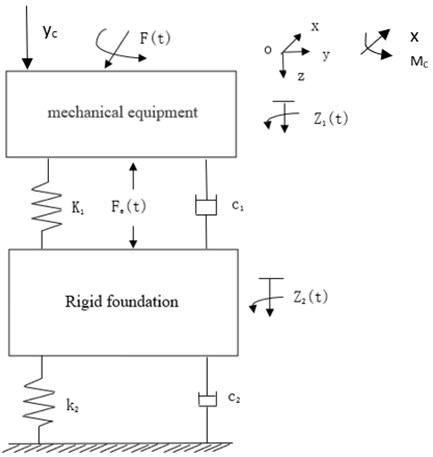 Due to the symmetry of the vibration isolation system model this article is focused on analyzing the vibration characteristics of the pedestal, for the convenience of research, the question is analyzed in a two-dimensional plane, and only the -direction and the movement around the -axis in the coordinate system in Fig. 2 are considered and the damping characteristics of the vibration isolation system is ignored. Establishment of coordinate system based on center of surface on rigid pedestal. We assume that the excitation force transmitted to the pedestal, the vertical stiffness of the lower spring is . According to the rigid body dynamics theory, the rigid body motion can be decomposed into the superposition of translation and rotation. The dynamic equation of the base can be expressed as:

where is the moment of inertia of the base structure along the -axis direction, and is the rotation angle of the base.

When the excitation force causes the upper structure and the lower pedestal to vibrate in multiple degrees of freedom, an actuator that produces only vertical force is difficult to fully match the dynamic force transmitted to the base pedestal. For the vibration with small amplitude, the vibration of the base can be decomposed into translation in the vertical -direction and fixed-axis rotation that passes through the center of gravity and is parallel to the -axis according to Eq. (1). When acting as an actuator on the rotation axis of the pedestal, each degree of freedom does not affect each other, so the active control force can only control the vertical component transmitted to the pedestal, and the problem of incomplete control effect occurs. When the actuator is not acting on the basic rotating shaft, since the vertical driving force will produce moment action at this time, the driving force will not only control the vertical component of the excitation force but also affect the rotation component. The rotational movement of the pedestal results in different phases on the left and right sides, while the basic translation is the movement of the entire pedestal in the same phase and amplitude, which will inevitably lead to inconsistent vibration control effects at different positions on the pedestal.

where , assuming that the error measuring point and the control force are located in the same position, the error acceleration signal can be expressed as:

Let 0, the optimal control force can be obtained by simplifying Eq. (2):

At this time, the vibration acceleration at the observation point on the base is:

where is the vertical acceleration at point on the base when the optimal control force is optimal, is the corresponding rotational angle acceleration, the first is the flat vibration along the -axis, and the second is the rotational vibration caused by rotation. It can be seen that the multi-degree of freedom vibration of the base cannot be completely controlled under the action of a single point of vertical force, and still retains some flattening and rotation components.

As it can be seen from the above, the reason why the base of the single bid locker isolation system is not effectively controlled by vibration consists in that the vertical control force cannot produce the right force and torque at the same time to suppress the rotating vibration, the torque generated by the single isolator is just taken into account with one factor, resulting in the situation that a part of vibration of the measuring point will rebound or even disperse at a later stage. The rigid characteristics of the base can be used to achieve the output of torque using multiple distribution actuators.

In order to more intuitively demonstrate the vibration law of the rigid pedestal in single vibration isolation system under the control force of a single degree of freedom, the active control effect of the two-dimensional rigid pedestal model is simulated, the control system adopts the feedforward FxLMS control algorithm. The reference signal is the vibration acceleration of the vibration source, and the error signal is the acceleration measurement point on the base. The principle is shown in Fig. 3. This algorithm has been studied in detail in the literature [12]. When the convergence step size satisfies a certain condition, the convergence stability of the control algorithm can be satisfied.

The position of the actuator on the pedestal is simulated. The position of the error measurement point is the same as the control target position. Set pedestal mass 1000 kg, pedestal spring vertical stiffness 300 N/mm, rotational stiffness 300 N/rad, basic moment of inertia 500 kg∙m2, the excitation vertical force acting on the pedestal is 1000 N, and the excitation torque is 5 N∙m. So it is possible to simulate the optimal control force required when the actuator is arranged in different positions and to measure the vibration in other position measuring points after the control is stabilized. 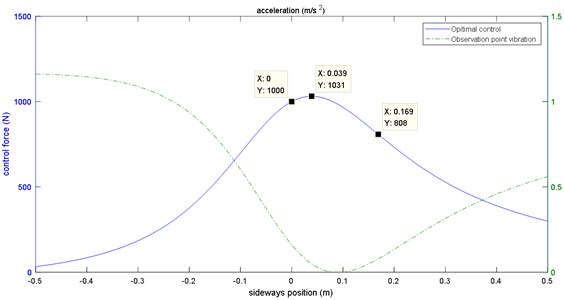 Fig. 5 shows the vibration situation of the base at different positions before and after control when the positions of the actuators are respectively 0.07 m, 0.1 m, and 0.12 m. It shows that the position of the control force (the actuator) plays an important role in the final control, which may cause the vibration of the observation point to decrease or increase, resulting in the failure to fully control the pedestal.

It can be referred from the simulation results that for the active and passive vibration isolation system with a single vibration isolator, there are two ways to fully control the vibration of the pedestal. The first is to use multi-degree-of-freedom actuators to make the control force fully match the transmitted initial excitation force. The second is to use multiple unidirectional actuators to indirectly output force and torque to control the base directly. Limited by the hardware resources of hardware conditions. In this paper, only single-degree-of-freedom actuators are used to build active and passive vibration isolation systems with single isolator and multiple isolators for experimental verification. 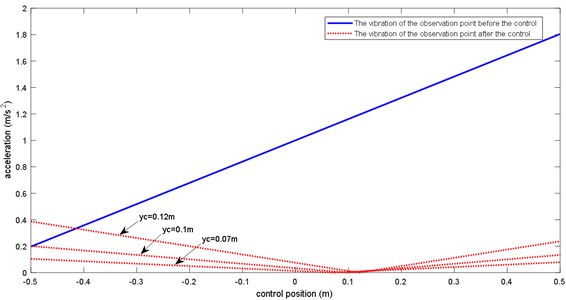 A single vibration isolator active and passive vibration isolation test platform shall be built as shown in Fig. 5. In the test, having a size of 1 m×1 m×0.23 m and weighing about 1t, the entire lower pedestal has a first-order elastic mode frequency of 564 Hz, which is far beyond the one in our research. With 4 airbags elastically supported, an electromagnetic airbag vibration isolator (containing an actuator capable of generating control force) is installed in the middle of the pedestal, and the upper mass fixed at it weighs about 100 Kg, which is excited by the inertial actuator to generate initial vibration .Acceleration sensors shall be installed at the lower surface of the pedestal at the position corresponding to the vibration isolator as the error sensor of the active control algorithm. On the upper surface of the pedestal, 16 additional acceleration sensors as shown in Fig. 6 are arranged uniformly (from top to bottom, from left to right). No. 1-16) to operate as observation sensors to evaluate the overall vibration isolation effect. 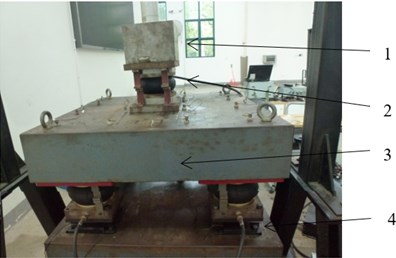 Fig. 8 contains curves of the recorded 60 s vibration data from 16 observation points during the control process. The active control is turned on at 17 s. It can be seen that the vibrations at the measuring points 1-4 are gradually converging and decreasing, while the measuring points 13-16 show obvious vibration attenuation first and then rebound the increase phenomenon, but overall, there is still a large vibration attenuation, which is consistent with the results of theoretical analysis. 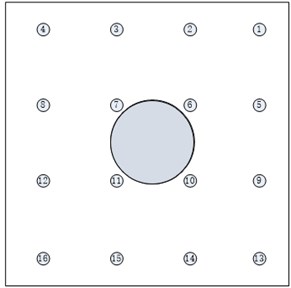 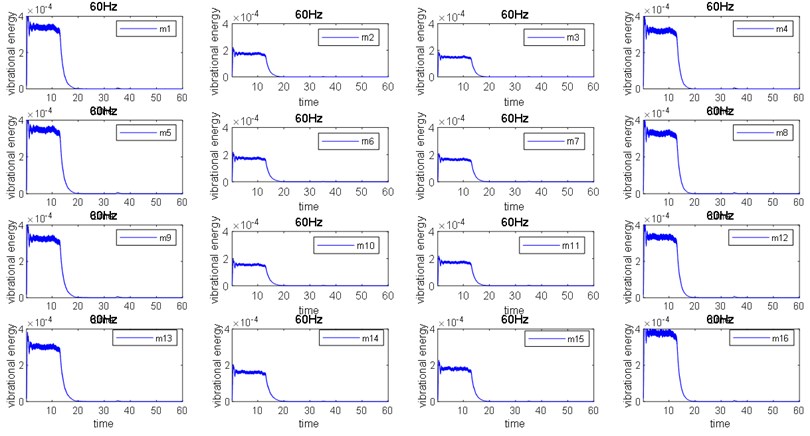 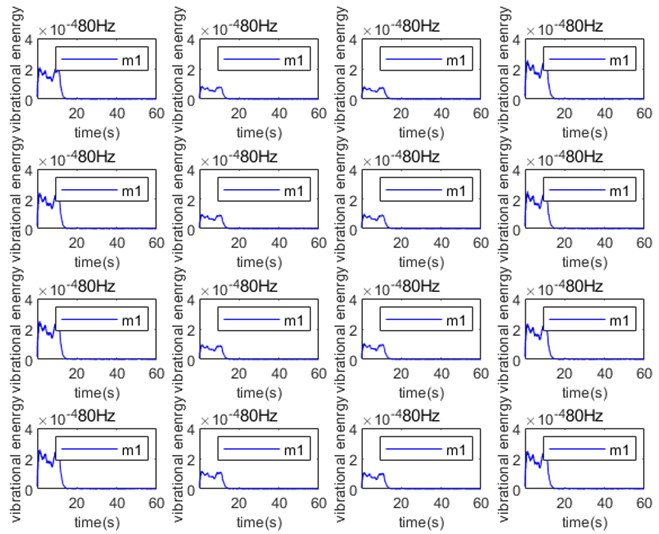 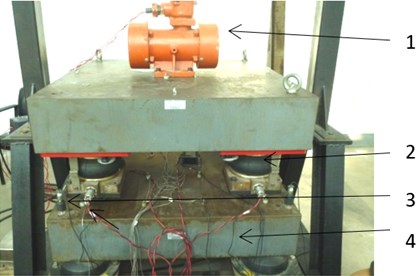 After installing the vibration motor, the inverter is used to adjust the motor speed so as to stimulate the vibration signal to carry out the active vibration isolation test. Fig. 9 and Fig. 10 show the vibration process of 16 error measuring points at 60 Hz and 80 Hz excitation, each measure points shows a small vibration magnitude of 8 points (2, 3, 6, 7, 10, 11, 14, 15) in the middle before control, with 8 points on both sides (1, 5, 9, 13, 4, 8, 12, 16) with vibration magnitude characteristics, indicating that the basic vibration contains rotating components, After opening each measuring point, the active control showed a consistent control effect, with an average value of up to 40 dB. Experiments show that observe points at all frequencies can be well controlled, and there is no local increase or excessive control, so the conclusion that the structural vibration analysis of the rigid body base with elastic support can be fully controlled is verified.

In this paper, the vibration transfer characteristics of the electromagnetic airbag active and passive vibration isolation system based on the rigid body base are studied. Based on the electromagnetic actuator that can only output a single degree of freedom force, the active and passive vibration isolation of a single vibration isolator and multiple vibration isolators are analyzed. Vibration characteristics of the base of the rigid body structure in the system. According to the theory of rigid body dynamics, the multi-degree-of-freedom vibration of the base is decomposed into two mutually orthogonal components, translational and fixed-axis rotation. Control the vibration in the translation direction, and the unreasonable placement of the actuator will lead to adverse effects such as mis-control or over-control. Additionally, global control of base vibration can be achieved by arranging multiple actuators simultaneously. Finally, test benches for single isolator and multi-isolator vibration isolation systems were built to verify the above conclusions.

The paper is funded by the fund projects: Project to promote young talents in military science and technology (18-JCJQ-QT-002).