Copyright © 2019 Zhu Wang, et al. This is an open access article distributed under the Creative Commons Attribution License, which permits unrestricted use, distribution, and reproduction in any medium, provided the original work is properly cited.

Tunnel Boring Machines (TBMs) are characterized by less noise, less vibration, a high-degree mechanization and automation, high safety and high reliability. Thus, TBMs have been widely used in tunnel excavation and other engineering projects. In the meantime, the TBM rock breakage efficiency is an important index to determine the method of tunnel excavation in engineering construction. The previous study found that the cutter spacing, and the penetration depth are two important factors, affecting the TBM rock breaking efficiency [1]. The research shows that excessively small cutter spacing will cause excessive damage for the rock, whereas larger cutter spacing will result in inadequate rock failure [2], limiting the efficiency. Similarly, when the penetration depth is inadequate, rock ridges form between two grooves and the TBM cutting efficiency is restrained. However, too large penetration depth is conductive for cutting rock. The amount of chips will increase with the increase of penetration depth, but the larger cutting force and the excessive energy consumption will be required correspondingly [3], causing excessive wear of the tool.

To study the optimum penetration depth for rock breakage by TBM double-edged cutters for different cutter spacing, homogeneous sandstones with bedding planes were used in this test. The distance between adjacent bedding planes is approximately 1 mm, and the rock size is 250 mm×200 mm×100 mm (Length × width × height) in Fig. 1. 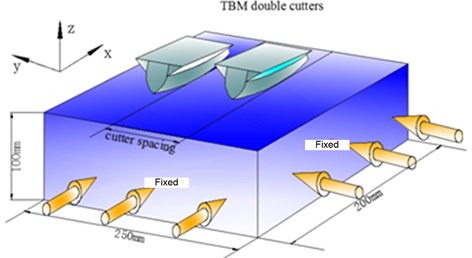 At the same time, all the rock specimens were cut and processed from the same rock mass and had similar mechanical and physical properties accordingly. With reference to the recommended test standards of the International Society for Rock Mechanics (ISRM), rock specimens were subjected to corresponding uniaxial compression, Brazilian split and direct shear tests. Table 1 shows the mechanical properties. According to the studies of Yin [12] and Liu [13], the size effect is negligible if the ratio of the plastic zone depth to the minimum specimen width is lower than 1/6. Combined with the “blunt-cutter cutting model” [14, 15] and the mechanical parameters of the rock specimens in Table 1, the obtained plastic zone depth is 2.0 mm, and the ratio of the plastic zone depth to the minimum width is 1/50, which is much lower than 1/6. Therefore, the selected sample size is reasonable.

Indentation tests were carried out on an improved uniaxial test equipment, installed in Center South University. The machine mainly consisted of a control system, a loading system and a computer system and it’s loading ways include force control and displacement. The maximum loading force in axial direction was 2000 kN. Thus, the loading requirements of the penetration forces provision could be satisfied. Penetration forces were recorded and stored every few seconds using the force data acquisition system. After the corresponding data of the curves of penetration forces and depths were proceed using the software Origin pro8, the penetration energy were obtained. As a portion of a TBM cutter, the geometry of the double-edged cutters, made of heat-treated high-hardness steel (Fig. 2).

To calculate the groove volume that formed between adjoin nicks, the morphology-measuring machine and corresponding analysis software TalyMap 5.0 were applied. The measuring accuracy of machine is 0.5μm, which meets perfectly the requirement of this test.

Fig. 2. A photograph of two TBM disc cutters and the geometric parameters of cutter

Fig. 3 gives the flow chart of the test process. Before conducting tests, the surfaces of specimen were burnished and lubricated to minimize the friction effect when the surfaces of the rock specimen were in contact with the cutters. Then, the specimens were cemented in a steel frame to simulate the field condition (Fig. 1). During tests, the loading measurement of the displacement and the quasi-static was used and loading rate was 0.5 mm/min. According to the research by Gertsch et al. [5], a proper penetration depth (6 mm) was recommended. Moreover, as cutter spacing increases, the penetration depth correspondingly increased. The values of - are shown in Table 2. 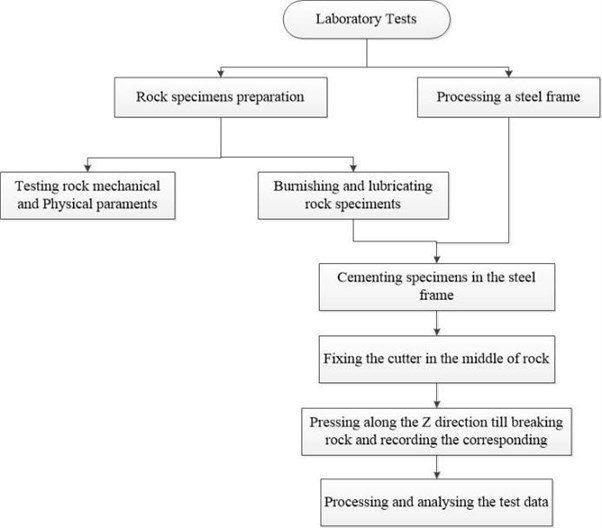 3.1. The chips between grooves

When the double-edged cutters penetrate the rock sample, the crack initiates from beneath the cutter, gradually develops into the main crack, and forms a plastic zone. This phase is the initiation phase of micro cracking. However, with the increase of penetration depth, the main crack continues to propagate. Simultaneously, the lateral cracks between the cutting edges rapidly expand and eventually converge, resulting in the spalling of the rock mass between the cutters to form chips (Fig. 4). In indentation tests, the chips between two grooves are commonly determined by the surface cracks, propagating in the interior of rock sample, and the crack originating from the plastic zone within the rock sample. 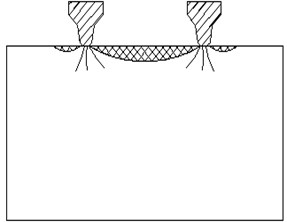 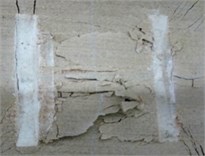 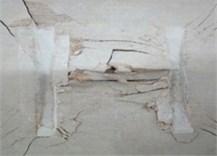 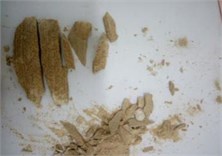 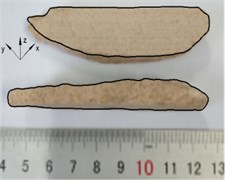 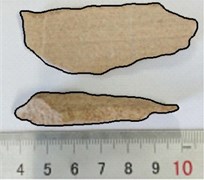 3.2. Relationship between penetration depth and groove volume under different the cutter spacing

The morphology and volume of groove are important factors for evaluating the TBM rock breaking efficiency [17-20]. After the separation of chips and powder, the scanning area is determined (the area enclosed by the dashed blue line in Fig. 6 is the scanning area). It should be pointed out that the depth of the groove forms below the cutter may exceed the depth of detection of the scanner, so it can only approximately reflect the groove volume of the sandstone. During the loading process, the rock surface was squeezed by the force, causing fragments to fly out. Therefore, to reflect the change of groove volume, the chips and the groove volume have to be independently analyzed. Table 3 shows the relationship between - and groove volume.

where the axial force loaded in step is ; the penetration depth of step i in the cutter is ; the number of steps for summation is . 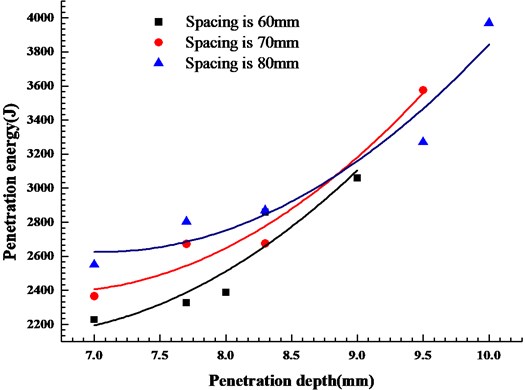 SE (Specific Energy) is an important index reflecting the TBM rock breaking efficiency [13, 17]. It is defined as the energy consumed for the formation of a unit groove volume:

where the rock breakage work is (J); the groove volume is (m3). 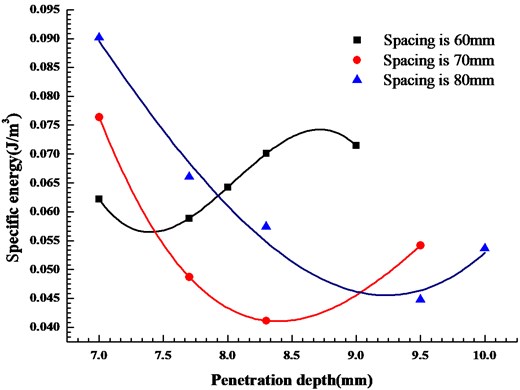 where is a function of ; is a positive coefficient; is the maximum tensile stress when only considering the confining pressure.

According to its stress field, the elasto-plastic boundary crack is a mode I-II crack. Then the extreme expansion condition of lateral crack [22] is:

With respect to the study of normal force and penetration depth, Roxborough [23] proposed a formula:

As a result, the fracture toughness of the rock () increases with the increase of the penetration depth. Thus, it shows that the more penetration energy on TBM breaking rock is consumed. The phenomenon is consistent with the linear relationship described in Fig. 9. Meanwhile, the reason of the sharp increase in energy is explained from the microscopic point of view. On the contrary, it also shows that the normal indentation force and the tensile stress at the crack initiation have the relationship of Eq. (1).

In this paper, the TBM cutters are assumed to be located at the rock center, which is based on the field investigation by authors and it is influenced by the optimal intrusion under different cutter spacings. In practice, the TBM cutters may also be located at the rock edges, which is the so called free face rock breaking. According to Liu and Shao [24], the contact mechanism, the contact mechanisms for the above two conditions are very different. It should be noted that only the condition of rock center is evaluated within the scope of this paper.