Copyright © 2020 Yuanyuan Zhou, et al. This is an open access article distributed under the Creative Commons Attribution License, which permits unrestricted use, distribution, and reproduction in any medium, provided the original work is properly cited. 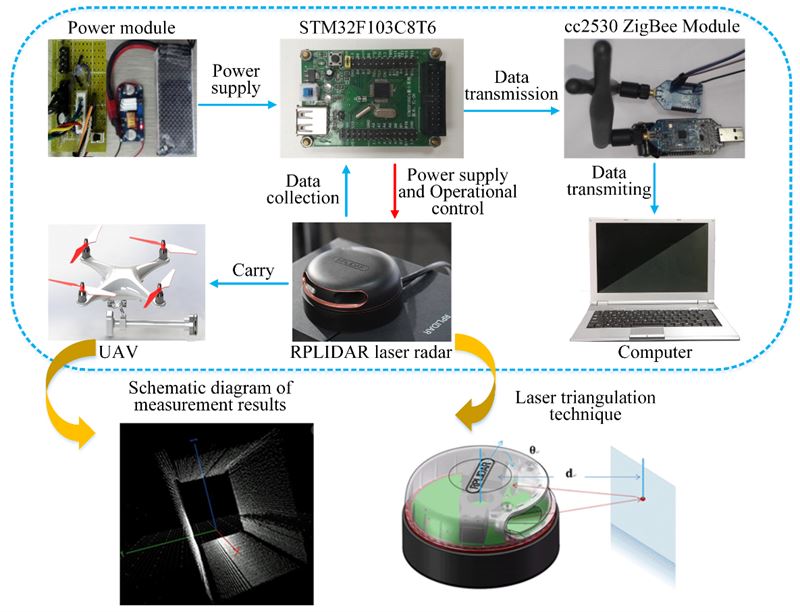 2. Overall program of the measurement and control system

The overall program of this study can be divided into two parts: host computer part and slave computer part. The slave computer is mainly used for the collection and transmission of tunnel contour data. The host computer is mainly used for the data processing, 3D reconstruction of tunnels and deformation evaluation. The whole process involves hardware systems and software systems, and the overall block diagram is shown as Fig. 1. 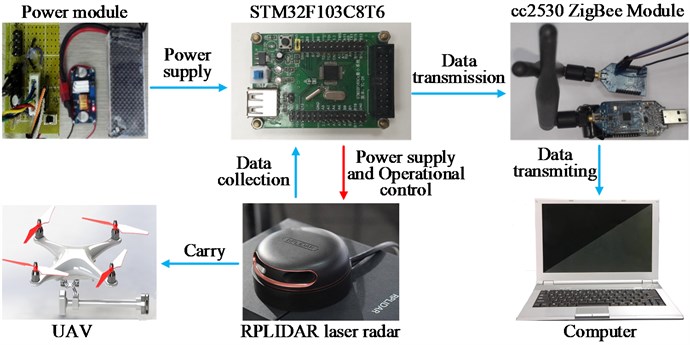 When the RPLIDAR is working normally, the ranging core will begin rotating clockwise scanning. The user can obtain the RPLIDAR scanning and ranging data through the RPLIDAR communication interface, and control the start, stop and rotation speed of the rotary motor through PWM.

Laser triangulation ranging technology is adopted by RPLIDAR, coupled with SLAMTEC developed high-speed visual acquisition and processing institutions, it can carry out up to 16,000 ranging actions per second [11]. Every time range in the process, RPLIDAR will launch through the infrared laser modulation signal, the laser signal generated after exposure to the target object reflective will be RPLIDAR visual acquisition system receiving, then through embedded within the RPLIDAR real-time DSP processor, the exposure to the target object and RPLIDAR distance and angle of the current information from the output of the communication interface. The schematic diagram of RPLIDAR system is shown in Fig. 3. 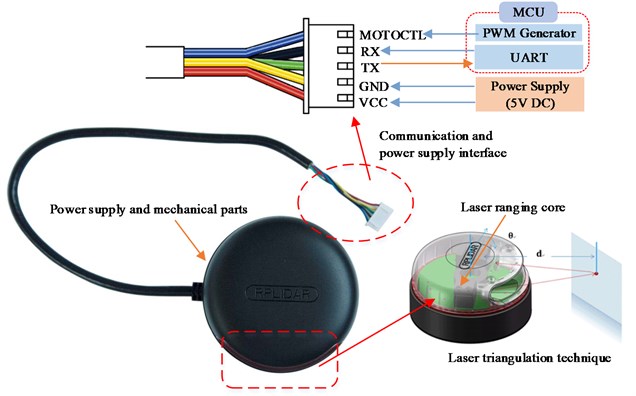 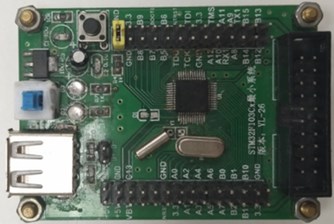 The system uses the cc2530 ZigBee wireless communication transceiver module for data mutual transmission, as shown in Fig. 7. ZigBee is a short distance wireless communication technology with low cost, low power consumption and ad-hoc network, which is widely used in environmental monitoring, smart home and other occasions. The ZigBee module needs to be configured before use. There are five steps in configuration, including 1) Connect the device and select serial port number; 2) Set the node type (coordinator or router); 3) Set the radio channel and PAN ID; 4) Set the node number and baud rate; 5) Set the data transmission mode. 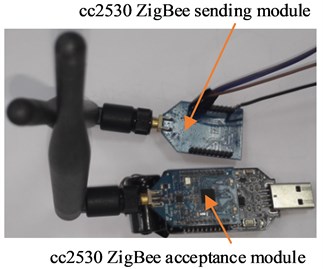 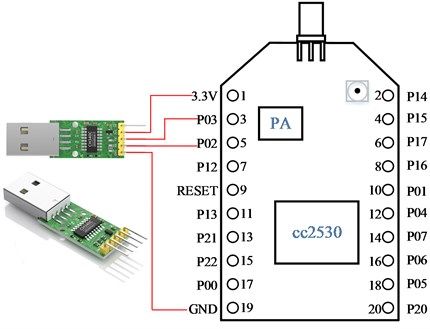 Tunnel wall data acquisition is based on the next bit machine software program to achieve. The scan request is sent to the RPLIDAR mounted on the UAV, then the RPLIDAR will return the response data. The STM32 will then read the response data in real time. After the preprocessing, the data will be sent to the host computer via the ZigBee module. Driven by the UAV, RPLIDAR will scan the entire mine tunnel, so the host computer can obtain the data of the entire mine tunnel sidewall.

The specific program flow chart and the LabVIEW For STM32 program are shown in Fig. 9. 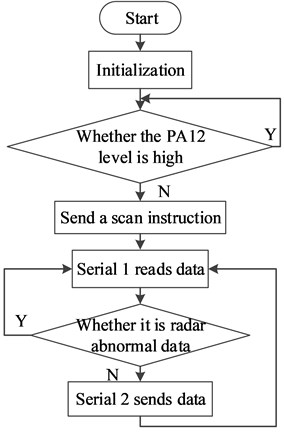 The data processing and image construction of this paper is based on Processing3.3 software. This paper mainly uses the size (width, height, renderer) function to make the processing work in 3D mode, and then declare the core class, using the Scene (parent) function to build the 3D environment [16], so that we can get a zoom in and out of the 3D scene The In this paper, the use of ControlP5 library cp5.addButton (string). Set Position (X-Position, Y-Position) is respectively, to create a Start button and Stop button, respectively, with the next machine to send and stop the command. The results of its creation are shown in Fig. 10. 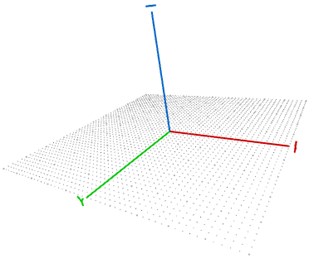 The system simulates the tunnel in the corridor for 3D image reconstruction. In the night corridor lights and lights off the two environments to simulate, as shown in Fig. 12.

First download the next bit machine program, connect the hardware device, as shown in Fig. 13. 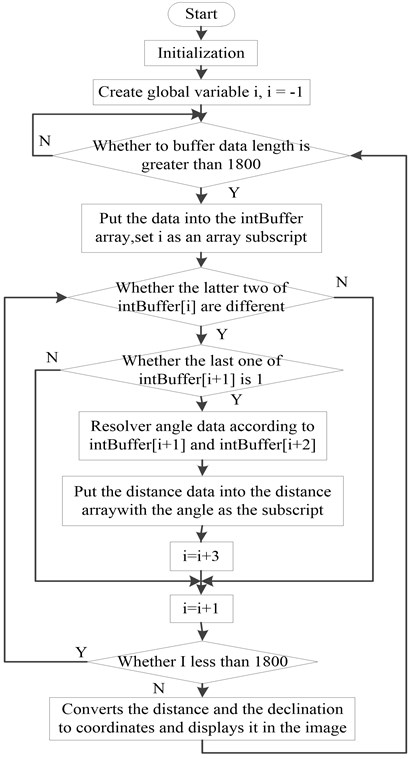 Experiments show that in the corridor lights and lights under the two environments scanning the same image (as shown in Fig. 14), indicating that the system is not limited by the light inside the tunnel. 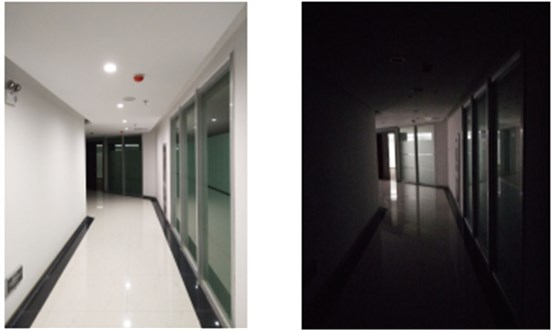 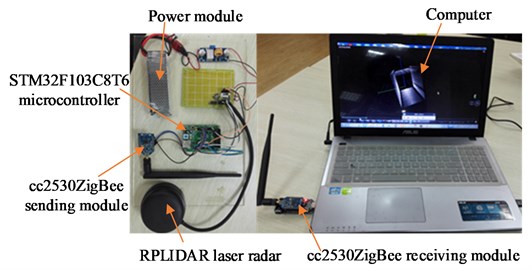 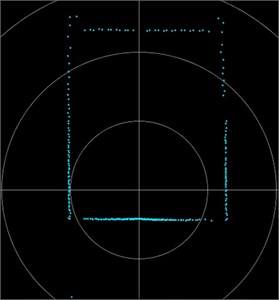 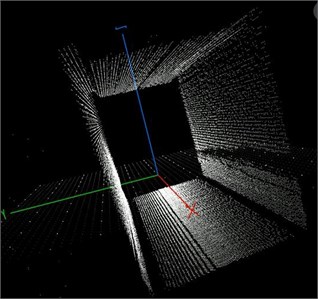 According to the experimental survey corridor contour data, respectively, take 0° and 180°, 90 ° and 270 ° corresponding to the four points (that is, laser radar up and down and left and right four points) distance values, respectively, in Fig. 15 A, C and B, D points, the size of which were, , , said.

This can be calculated by measuring the upper and lower corners of the corridor height value , with the left and right width value . Respectively: 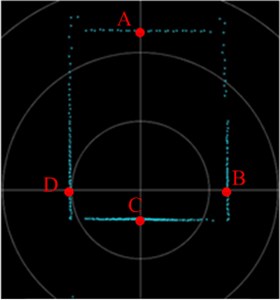 While the actual height of the corridor is 2400 mm, the left and right width is 2000 mm. The system measured the corridor height and width of the relative error can be calculated as below:

The numerical analysis of the specific error is shown in Table 2. Respectively.

In this paper, a tunnel deformation measurement method based on radar technology is proposed, and a tunnel deformation detection system based on RPLIDAR radar is designed. Through the next bit machine control processing core STM32 microcontroller and laser sensors, ZigBee organically combined to achieve the lower computer data acquisition system. Through the data communication with the host computer, the collected data will be sent to the processing program, the program will process the data display, which realizes the simple reconfiguration of the two-dimensional plane and the 3D image, and achieves the fast and low error detection of the tunnel deformation.