Numerical study of flow characteristics around rectangular cylinders in tandem

Copyright © 2021 Md Mosharrof Hossain, et al. This is an open access article distributed under the Creative Commons Attribution License, which permits unrestricted use, distribution, and reproduction in any medium, provided the original work is properly cited.

The phenomena of mean pressure distribution around two square cylinders in tandem has been carried out. Also the mean velocity distribution in the wake of the two cylinder are studies. The Navier-Stokes equation for conservation of momentum and the continuity equation for conservation of mass are used to study the pressure and velocity distribution for various longitudinal spacing of the cylinder. The turbulent - stationary flow at a high Reynolds number of 6.5e4 is used to simulate single-phase flow. A critical longitudinal spacing equal to four times the side dimension of the square cylinder (4) is investigated. Beyond that critical spacing both the cylinders are subjected to drag force. When < 4 only the downstream cylinder is subjected to negative drag. Also, the form of the streamline profile behind upstream cylinder is different from that of single cylinder. However, beyond 4 the nature of the pressure behind both of the cylinder becomes kind of like that of the single cylinder. 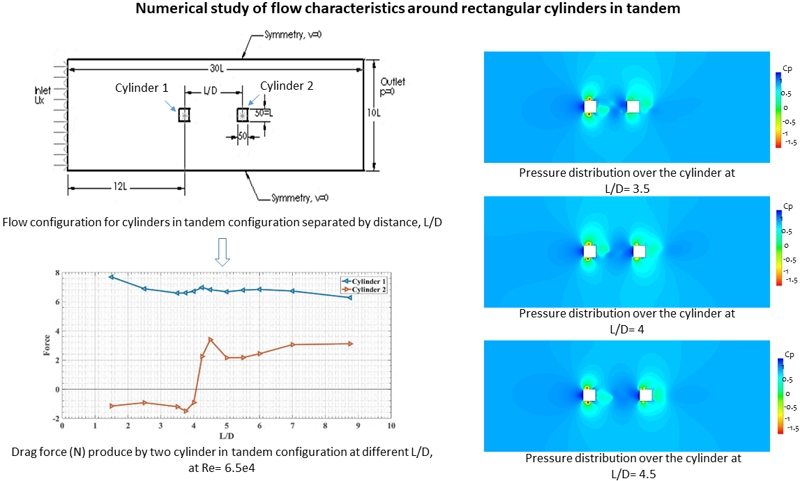 In fluid mechanics the flow around and behind cylinders plays a very important role from the elemental and applied point of view. Flow past a cylinder is often related to the separation of flow behind the cylinder incurring large energy losses, especially within the case of flow past rectangular and square cylinders. The separation of flow occurs at the corner of the frontal face and a complex wake is formed behind it.

Numerous investigation both numerically and experimentally have been made on the flow past single obstacles with various shapes, when more than one bluff body is placed in a uniform flow, the surrounding flow and vortex shedding patterns are different from the case of a single body. Filiz et al. experimentally investigated flow characteristics around a horizontal circular cylinder and circular cylinders in tandem configuration horizontally [1]. They found that the space between tandem cylinders deepens the dimension of the wake zone rises. Mithun et al. numerically investigated the wake characteristics of flow past two tandem square cylinders vibrating in phase [2]. They found the complex interaction of flow between the cylinders gives rise to a spread of characteristically different shedding pattern in their wake. Bearman et al. investigated the surface pressure co-efficient, drag co-efficient and Strouhal number of rectangular cylinder with one face normal to the flow direction [3]. It’s found that with 0.62, where is that the section depth and is that the section width normal to the wind direction. By introduction a splitter plate into the wake region they found that the increased drag effect was completely eliminated. Igarashi experimentally investigate the characteristics of the flow around four circular cylinder arranged in line [4]. Concerning the behavior of the shear layer separated from the primary cylinder to the downstream ones, the flow patterns were classified per the longitudinal spacing between the axis of the cylinders and Reynolds numbers. Flow behavior around the downstream cylinder changed drastically within the transition region. Thereby, a bi-stable flow and a hysteresis phenomenon emerged. Dilip et al. numerically simulated shear flow past a square cylinder near a wall in presence of eddy promoting rectangular cylinders to achieve a stronger insight into two dependency of aerodynamics characteristics of both the cylinders [5]. They observed thrust force on the downstream cylinder in presence of the thinner promoter at closely spaced arrangement. Salvador et al. numerically found that no vortex shedding occurs within the gap between the two circular cylinders in tandem, where the separated shear layer produced by the upstream cylinder reattach on the surface of the downstream one [6]. The flow around an arrangement of two cylinders in tandem exhibits a remarkably complex behavior and lots of publications are often found in this literature [7-11].

The literature survey reveals that numerous papers have been published in the area of flow past one or more circular and rectangular cylinder. The present study is devoted to the study of flow past two square cylinder arranged in tandem.

To measure the pressure distribution around the two square cylinder arranged in tandem where dimension of each cylinder was 50 mm×50 mm, a rectangular symmetric domain having length of 30 and height of 10 where, is the edge length of the cylinder, is considered for the fluid zone in the present study as shown in Fig. 1. The Cartesian co-ordinate system is considered and the origin is at the center of upstream cylinder, which is located in (12D, 5D) from the inlet of the domain, which is the center of the upstream square cylinder. Two square cylinder of same edge length are placed in the tandem position. The center to center distance varying considering the upstream cylinder fixed and / varies with the movement of the downstream to right hand side.

The SST - model is used, which is an empirical model based on transport equation for the turbulence kinetic energy () and the specific dissipation rate (), which are obtained from the following transport equation:

For turbulent flow, the - and - model is popular for simulating single phase flows at high Reynolds number. The equation of Reynolds number ( as follow:

where, is the characteristics length of the body. In the realizable - model, the turbulence effects are modeled using the realizable two equation - model, flow close to the wall modeled using wall functions, which offers a poor result close to wall region [11]. Whereas, the - model can resolve the flow all the way down to the wall [12]. In the present study, for turbulent flow, SST - model is used, the SST - model is so-called low Reynolds number model, which shows the similar accuracy like - model. The model depends on the distance to the closest wall [13].

The effective diffusivities for the SST - are given by:

where, and are the turbulent Prandtl number for and respectively. The term represents the production of turbulence kinetic energy, defined as follow:

And the term represents the production of and is given by:

Since the mean pressure distribution around the rectangular cylinders are observed, the computational region is discretized in such a way extremely fine triangular mesh in generated around the cylinders, so that the change of velocity and pressure around them observed closely. Fig. 2 shows the mesh grid system.

Effect of interspacing between the cylinders was observed by changing the ratio of /. Simulations are carried out at high Reynolds number of 6.5e4.

Fig. 3(a) and Fig. 4(a) shows the streamline and pressure contour for the single square cylinder. It is seen that the spread of the wake increases as the distance from the body is increased and the difference between the pressure in the wake and that outside become smaller such a spread of a wake is logical from the point of view of energy transfer to the wake from the surrounding. The pressure of body in the cylinder section reduces the flow area and thereby increases the velocity of air as it flows around the body. This increase of velocity due to the presence of the body is called solid blocking. The wake behind a body has a mean velocity lower than the free stream. 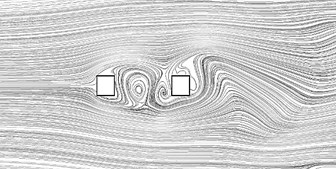 The effect of flow characteristics around square cylinders in tandem is analyzed is presented. It is being observed that 4 is the critical spacing which effects the pressure distribution and aerodynamic forces on both cylinders.

1) For 4, the pressure on the front surface of the downstream cylinder is much lower than the wake pressure of the same cylinder.

3) When 4, the downstream cylinder is subjected to negative drag and at 4 positive drag occurs.