Copyright © 2022 Xinxin Deng, et al. This is an open access article distributed under the Creative Commons Attribution License, which permits unrestricted use, distribution, and reproduction in any medium, provided the original work is properly cited.

Knee joint is the most important and complex structure in human lower limbs. It is a nonlinear, time-varying and strong coupling system. In this paper, the mechanical structure of prosthetic knee joint is built, and parallel control of CMAC and PID algorithm is introduced to establish the knee joint control model. Through the simulation analysis, it is found that CMAC-PID control algorithm compared with the traditional PID control can improve the real-time and accuracy of the system. Therefore, CMAC-PID control algorithm can optimize the control effect of the prosthetic knee.

According to the results of previous investigations, the number of lower-limb disabled people in China is very large, so lower-limb medical AIDS have gradually attracted people's attention. The mechanism should not only be able to realize the basic functions of knee joint, but also have a good appearance and social recognition [1]. Therefore, a variety of knee joint models have been proposed, which can be divided into passive type and active type according to the drive mode. The passive type is a pure mechanical structure that relies on the wearer's power to control the knee movement, while the active type carries a microprocessor and driving device, which can power the movement of the knee. This paper aims to design an active prosthetic knee joint, which will provide the wearer with the torque required for the knee to achieve more complex actions.

Inevitably, response speed and accuracy of knee joint is required in the normal gait of human body. If your knees react too slowly, it is hard to keep your balance and walk smoothly, and if your knees don’t rotate into the right position in time, you can fall. Cerebellar model articulation controller (CMAC) is a kind of tabular query adaptive neural network expressing complex nonlinear function and changes the contents of the table through learning algorithm. The trajectory of healthy human knee joint is usually nonlinear, while CMAC can learn any multi-dimensional nonlinear mapping and is insensitive to the order of learning data. At the same time, CMAC is a neural network based on local learning, which has a very fast learning speed and is suitable for real-time control under the premise of guaranteeing the nonlinear approximation performance of the function [2]. In this paper, the knee joint mechanism is designed, and CMAC and PID parallel control algorithm [3] are adopted to optimize the knee joint control system.

For the convenience of reading, the nomenclature of the symbols involved in the mechanism is listed in Table 1.

Table 1. Symbol nomenclature of the mechanism

In the figure, the hinge connection of the four-bar mechanism is represented by four points , , and . Point is used as the origin to establish the Cartesian coordinate system. The lengths of four bars 1, 2, 3, 4 is expressed by , , , respectively, and the angle corresponding to the horizontal plane is , , , . Bar 4 is connected with the thigh stump socket, and bar 2 is connected with the mechanism of the lower leg. Point is the instantaneous center of rotation (ICR) of the knee joint. As is shown in the Fig. 1, the relationship between the four-bar mechanism can be obtained:

The above equation is computed and simplified to obtain the following [6]:

Thus, the relationship between the coordinates of points , , and the above variables can be obtained:

Let the coordinate of point be (), and according to the slope relation of the line, we can get:

After sorting out, the relationship between the coordinates of point and points , , is obtained:

By calculating the above equations, the relationship between point and the length of four bars and can be obtained. is the initial position angle of the mechanism. Then, these variables will be optimized to obtain the most appropriate mechanism parameters. is tentatively set as , and a vector with the lengths of four bars as the parameter is established:

According to previous conclusions, the flexion angle range of knee joint is approximately 0° to 110°. In the reference [7], researchers have measured the ideal coordinates of the ICR of knee joint, and then the objective function of optimization of four-bar mechanism is established as follows [8]:

According to the kinematics and physiological conditions of the four-bar mechanism, constraints were established, and a functional model was built to optimize the parameters. The optimal results of the four-bar length and were obtained: 58.77 mm, 48.98 mm, 49.65 mm, 33.57 mm, 25.50°. Then, based on these parameters, a model was established for simulation [9], and the simulated trajectory of the ICR of the four-bar mechanism is finally obtained, as shown in the Fig. 2. Root mean square error (RMSE) is a commonly used measure of the difference between values. The specific numerical values on the ICR of prosthesis knee joint and ideal knee joint are calculated, and the RMSE of them is about 2.7092 mm. In theory, the error between prosthesis knee and ideal knee is small. As can be seen from Fig. 2, the trajectory of the optimized mechanism’s ICR is very close to that of the ideal knee joint, indicating the mechanism can simulate the motion of human’s knee joint well.

2.2. The mechanical structure of the prosthetic knee

In order to simulate the motion of human knee joint, the relationship between knee angle and torque in a gait cycle is acquired. As is shown in Fig. 3, the graph at the top is the torque of the knee and the graph below it is the angular variation of human’s knee joint in a gait cycle. In the angle-time graph, the graph is divided into five parts: part 1 is response to weight and support; part 2 is final support; part 3 is initial swinging; part 4 is intermediate swinging; part 5 is final swinging. These parts represent the states of the knee joint during a gait cycle, and the torque corresponding to each state can also be known from the graph [10].

Fig. 3. Knee angle and torque for one gait cycle

According to the above calculation and analysis, the CAD view of mechanical design of the prosthetic knee is shown in Fig. 4. The knee joint can rotate 100 degree which is enough for walking, sitting, and going upstairs. The rotation of the knee joint is provided by a lead screw driven by a motor. The nut, nut connector and connecting link are joined together to transfer the force from the nut to the four-bar mechanism. When the motor starts and the nut moves down, the four-bar mechanism carries out corresponding structural changes, and the rotation angle of the prosthetic knee joint increases. Two limit switches are installed on the mechanical structure, which will automatically cut off the motor once the nut reach the upper and lower limit positions.

The names of some parts of the prosthetic knee joint and their materials are marked in the CAD drawing. Except for those marked in the drawing, other parts are made of aluminum alloy (7075). Compared to other metal materials, aluminum alloy has many excellent properties, such as high strength, good wear resistance, corrosion resistance and oxidation resistance. In the same volume, aluminum alloy has the characteristics of low density and light weight, which can be used as a prosthetic material to reduce the burden of the wearer. Some rubber pads are also installed on the mechanical structure as shown in the enlarged part of Fig. 4. Rubber material presents unique viscoelastic properties, and has good shock absorption, sound insulation and buffering properties. Rubber parts are widely used in vibration isolation and shock absorption because of their characteristics of hysteresis, damping and reversible large deformation. Therefore, rubber pads are installed above and below the nut connector here as cushioning elements to reduce the noise generated by the movement of the connector.

Fig. 4. CAD view of mechanical design of the prosthetic knee

CMAC network is a kind of neural network that realizes associative memory through multiple mappings. It simulates the function of the cerebellar cortical nervous system to sense and store information and use information by association. CMAC not only has a fast-learning speed, but also has a high accuracy, which has an important application value in the field of intelligent control [12]. The network structure of CMAC is shown in the Fig. 5. 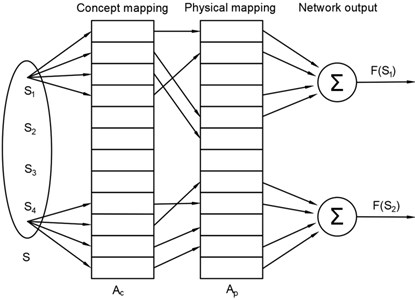 Beforehand, some researchers have found the advantages of CMAC-PID control. In 2009, Wen Xia and others proposed CMAC and PID compound control strategy of DC motor [13]. Compared with conventional PID algorithm, the controller improves the non-linear approximation ability of the system; In 2018, Pei Jianjun and Wang Hongwen found that adopting the CMAC-PID control plane manipulator hydraulic drive system can improve the motion trajectory response speed and tracking accuracy of the manipulator than conventional PID control [14]. Next, CMAC-PID control will be applied to the prosthetic knee system and compared with traditional control algorithm to verify its advantages. The nomenclature of symbols CMAC-PID control system is listed in Table 2.

The calculation formula of the control system is:

where is the network learning rate, , is the inertia, [2].

Import the established prosthetic knee joint model into MATLAB, as shown in Fig. 7, and then input step signal and constant signal to the system respectively [13]. Here, the angle of one bar in the four-bar mechanism is selected as the research object to provide feedback information for the controller to learn and adjust itself. After calculation of relevant formulas, the change of knee joint rotation angle can be obtained according to the angle change of the bar.

After the step signal and the constant signal are input into the control system, the simulation performance is compared between the single PID control and the CMAC-PID composite control, where, the parameters in CMAC network are set as follows: 100, 5, 0.1, 0.04, in PID control: 3, 15, 1.5. These parameters are applied in Fig. 8 to Fig. 11. The simulation results are shown below. 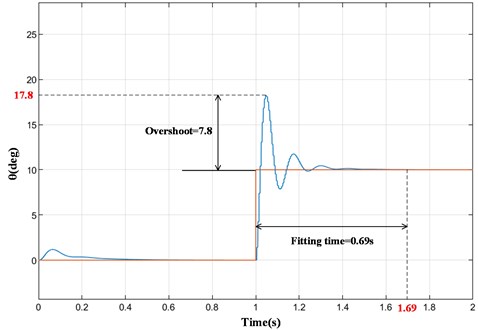 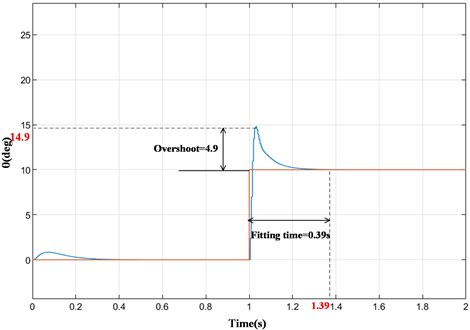 It can be seen from the simulation results in Fig. 8 and Fig. 9 that when the input signal is a step signal, the output signals of both systems approach the input signal in a short time. However, when the input signal changes instantaneously, the overshoot of the system under PID control (Fig. 8) is about 7.8, and the time required to fully fit with the ideal output signal is about 0.69 s. In the CMAC and PID compound control system (Fig. 9), the overshoot is about 4.9, and the fitting time is about 0.39s. Compared with single PID control, the overshoot of the prosthetic knee system under CMAC and PID composite control is reduced by 37.2 % and the fitting time is reduced to 56.5 %. Therefore, the compound control algorithm has smaller overshoot and faster response. 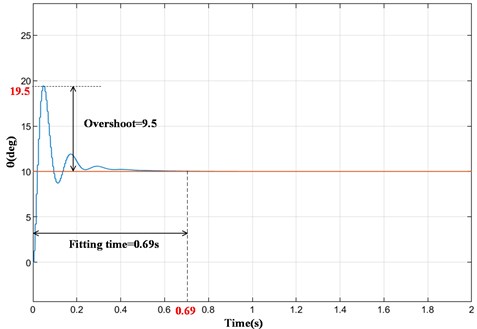 In the prosthetic knee joint control system, compared with traditional PID control, the addition of CMAC reduces the overshoot by 37.2 % to 40 % and fitting time by at least 43.5 %, thus the system has better real-time performance, which is beneficial to the control of prosthetic knee. Due to CMAC is a local approximation network, and there are fewer weights to adjust, it has the characteristics of small output error, good real-time performance and strong robustness. 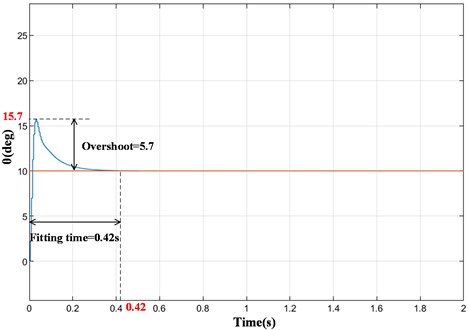 This paper aims to design a prosthesis knee that can provide the active torque for the knee joint. Firstly, the structural parameters of prosthesis knee joint are determined according to the ICR of healthy knee joint. Then, mechanical design is carried out with mechanism parameters. Finally, a control system for prosthetic knee joint was established-CMAC and PID compound control, which improves the response speed and tracking accuracy of the prosthetic knee.