Copyright © 2022 Hongyu Tang, et al. This is an open access article distributed under the Creative Commons Attribution License, which permits unrestricted use, distribution, and reproduction in any medium, provided the original work is properly cited. 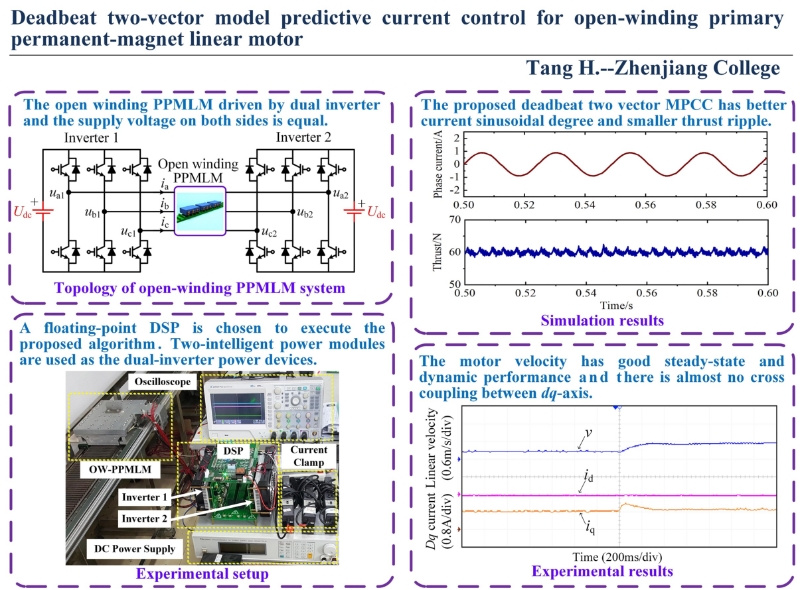 Primary permanent magnet linear motor (PPMLM) is based on the principle of magnetic gear. The short primary provides excitation magnetic field, and the long secondary plays the role of modulating air gap, which has the advantage of high thrust [1]. In addition, because the long secondary has neither armature winding nor permanent magnet, it also has the advantage of low cost and is very suitable for long-distance linear motion fields such as high-rise elevator and rail transit [2].

Compared with the traditional permanent magnet linear motor, the power factor of PPMLM is relatively low, resulting in lower thrust than the traditional permanent magnet linear motor under the same DC bus voltage [3]. Increasing the DC bus voltage of the inverter can improve the thrust performance of the motor. However, for specific applications, the increase of DC bus voltage is often limited by the available power supply voltage. In addition, adding a boost converter at the front end of the inverter can increase the DC bus voltage, but this multi-stage converter structure with large inductance will increase the volume of the driving device and reduce the system efficiency [4]. The open winding motor structure driven by dual inverters is another DC bus voltage boosting method [5], [6]. Since each phase winding of the motor is equivalent to being powered by the full bridge inverter, the winding terminal voltage can be greatly improved [7]. The dual inverter can produce more space voltage vectors to form a multi-level effect, which is helpful to reduce current harmonics [8].

In order to realize the high-performance operation of open winding PPMLM fed by the dual inverter, the traditional vector control and direct torque control have been extensively studied. Vector control can achieve good steady-state performance, but the controller is sensitive to motor parameter changes, and the coupling between AC and DC axis currents also worsens the dynamic performance [9]-[11]. Compared with vector control, direct torque control has the advantages of strong parameter robustness and fast dynamic response, but it suffers from a large torque ripple [12], [13]. In recent years, finite control set model predictive control has attracted extensive attention of scholars, because of its advantages such as simple idea, fast dynamic response, and flexible voltage vector selection [14]-[17].

For the model predictive control of dual inverter open winding motor drive system with dual power supply, a model predictive torque control (MPTC) is proposed for open winding induction motor under asymmetric DC bus voltage [18], which effectively reduces torque and flux ripple by increasing the number of voltage vectors. However, there is a weight coefficient between torque and flux, so it is difficult to obtain the optimal control performance. To solve this problem, an MPTC strategy for open winding induction motor is proposed to eliminate the weight coefficient [19], [20], which can achieve better torque and flux control performance. However, this strategy requires a large amount of computation. A low complexity MPTC strategy is proposed for open winding permanent magnet synchronous motor, which can reduce the computational burden. Because only one voltage vector works in each sampling period, the steady-state performance is poor. Alternatively, in order to avoid the difficulty of adjusting the weight coefficient of MPTC, a model predictive current control (MPCC) is proposed [21], which not only improves the current control performance, but also enhances the robustness of motor parameter change [22]. A MPCC with zero-sequence current suppression is proposed to improve torque performance for the open winding permanent magnet synchronous motor fed by common dc-link dual-inverter [23]. Similarly, a zero-sequence current suppression strategy is proposed to reduce the thrust ripple [24]. However, the MPCC strategies mentioned above all have the problem of complex implementation, and the required switching frequency is high under the same performance, affecting the efficiency of open winding drive system.

In addition, a tri-partition state alphabet-based sequential pattern is proposed for multivariate time series [25]. Relevant ideas have a good reference significance for improving the control performance of MPCC. On the other hand, the resistance between arbitrary sites in the infinite networks is studied and calculated by Cserti’s method [26], Green’s function method [27], equivalent transformation method [28]. In these methods, an infinite network goes to a finite one if the separation between the two sites is large. Introducing the above idea into the MPCC with the finite control set, a similar conclusion is that the greater duty cycle of the voltage vector, the greater the impact of the vector has on the PPMLM control performance. Thus, the voltage vector with the largest duty cycle is the optimal vector.

This paper presents a two vector MPCC based on deadbeat current control principle. Compared with the traditional MPTC and MPCC strategies, the proposed deadbeat two-vector MPCC algorithm has the advantages of lower current harmonics and better thrust performance as well as lower algorithm complexity. Moreover, the proposed algorithm can avoid the adjustment of the weight coefficient, which facilitates the optimization of the control performance. The rest of this article is organized as follows. In Section 2, the mathematical model of the open winding PPMLM is derived. In Section 3, the space voltage vector distribution characteristics of dual inverters are analyzed. In Section 4, the basic principle of the proposed deadbeat two-vector MPCC is presented, including the determination of the sector location and the duty cycle calculation of the optimal vectors. Simulation and experimental results are given in Section 5. Finally, Section 6 concludes this article.

The voltage equation of open winding PPMLM in three-phase coordinate can be expressed as:

The current equation of open winding PPMLM can be obtained from Eq. (2):

In the rotating coordinate, the electromagnetic torque of open winding PPMLM can be expressed as:

In the dual inverter drive system shown in Fig. 1, the space voltage vector generated by inverter 1 and inverter 2 can be expressed as:

Therefore, the synthetic space voltage vector generated by the dual inverter can be expressed as: In Fig. 2, 64 synthetic vectors are distributed in 19 different spatial positions, corresponding to 18 non-zero vectors and 1 zero vector. Taking the spatial position G as an example, the synthetic voltage vector is 1'. Corresponding to the voltage vector (100) of inverter 1 and the voltage vector (011) of inverter 2 respectively. The synthetic space vector distribution of the whole dual inverter can be divided into six trapezoidal large sectors I-VI, and the centers of the large sectors are A-F respectively. As can be seen from Fig. 2, the space voltage vector distribution of the dual inverter is exactly the same as that of the three-level inverter. Therefore, better control performance can be obtained than that of the single inverter drive system.

In order to improve the control performance of open winding PPMLM dual inverter drive system, a deadbeat two vector MPCC is proposed in this paper. Firstly, based on the deadbeat current control principle, the position of the large sector where the reference vector is located is determined. For example, when the reference vector is located in sector I, as shown in Fig. 3, the optimal vector produced by inverter 1 is , and the corresponding voltage vector is (100).

The reference vector can be synthesized by the reference vector and the reference vector . Therefore, when the vector is generated by one voltage vector of inverter 1, the vector can be approximated by two voltage vectors of inverter 2. In order to obtain the two optimal vectors and their duty cycle of inverter 2, the position of the small sector where the vector is located is further determined. For example, in Fig. 3, when is located in small sector (1), the non-zero vector (011) output by inverter 2, non-zero vector (001), zero vector (000) are three undetermined vectors. Finally, according to the action time of each vector, two optimal vectors are selected and their duty cycle is calculated to realize the proposed MPCC algorithm. 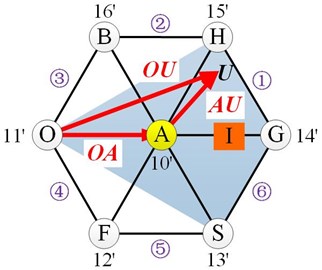 In order to implement proposed MPCC algorithm, first of all, the current equation shown in Eq. (3) needs to be discretized by first-order forward Euler:

According to the deadbeat current control principle, it is assumed that the -axis current and -axis current can track their reference values respectively at the end of each sampling period:

When the open winding PPMLM is controlled by 0, bring Eq. (8) into Eq. (7) to obtain the -axis and -axis reference voltages:

To facilitate the judgment of large sectors, three auxiliary variables are defined:

where, is a symbolic function, and the output is 1 when 0. When 0, the output is 0. According to Eq. (12), when is 1, 2, 3, 4, 5 and 6, the corresponding large fan area codes are II, VI, I, IV, III and V respectively. According to the switching state of two-level three-phase inverter and the above large sector judgment method, the reference voltage and of inverter 2 in each large sector can be obtained, as shown in Table 1.

Further, a theoretical analysis of the proposed deadbeat two vector MPCC is presented here. For a model predictive control, a cost function is usually used to select the optimal vector. In the open-winding PPMLM drive system with MPCC algorithm, the cost function can be defined as:

As shown from Fig. 3, the vector combination (, ) in sector IV is used as an example to analyze the action time distribution principle of the proposed algorithm. The volt-second error caused by (, ) is:

where is the distribution factor of the action time of . Therefore, the square of can be expressed as:

The duty cycle calculation of the two optimal vectors of inverter 2 is shown in Table 3. 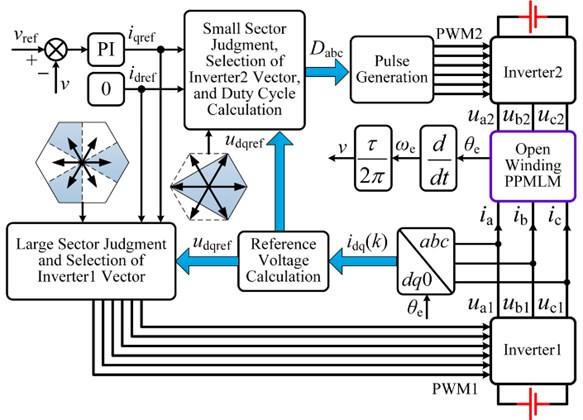 In order to verify the correctness of the proposed deadbeat two-vector MPCC for open winding PPMLM drive system, the simulation analysis is carried out in the environment of MATLAB/Simulink, and the experimental verification is carried out on the prototype platform. The experimental platform is shown in Fig. 5. Motor parameters as follows: -axis inductance 85.2 mH, -axis inductance 85.2 mH, winding resistance 1.12 Ω, permanent magnet flux linkage 0.105 Wb, polar distance 14.7 mm, mover mass 32 kg. 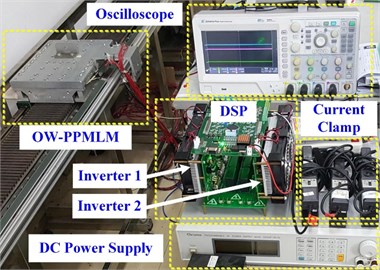 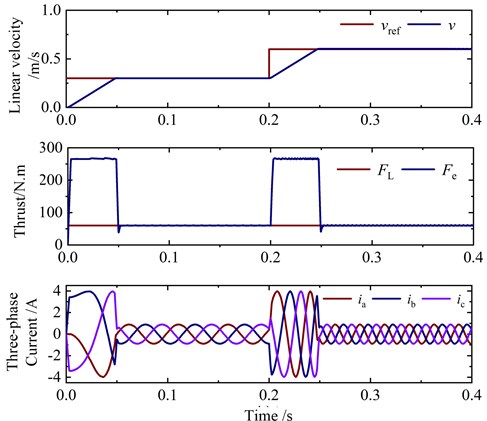 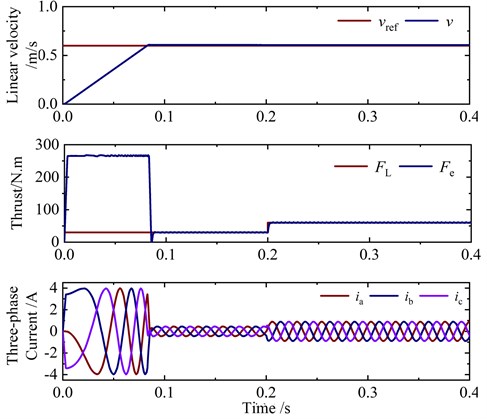 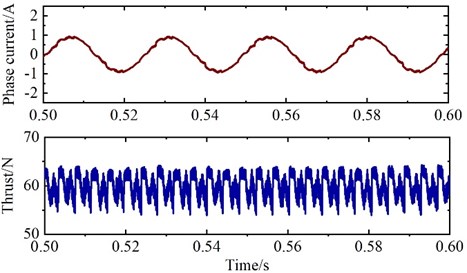 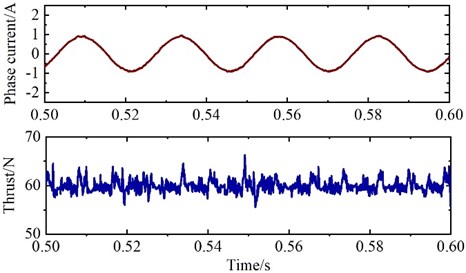 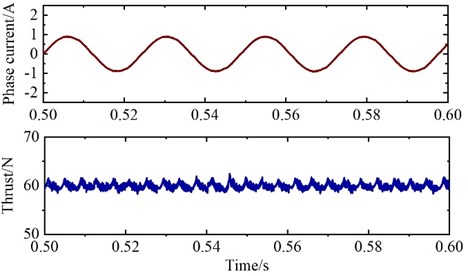 Fig. 9 shows the experimental results of open winding PPMLM deadbeat two-vector MPCC control system. It can be seen from the Fig. 9 that the three-phase current of the motor has good sinusoidal degree, and the linear velocity of the motor also has good steady-state and dynamic performance. In addition, from the -axis current waveform, it can be seen that there is almost no cross coupling between -axis in the dynamic process. Therefore, the proposed deadbeat two-vector MPCC has fast dynamic response. 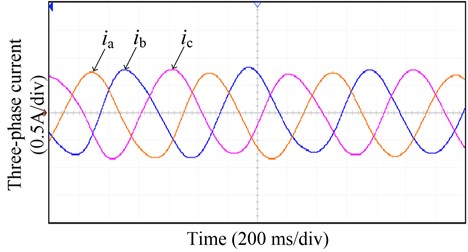 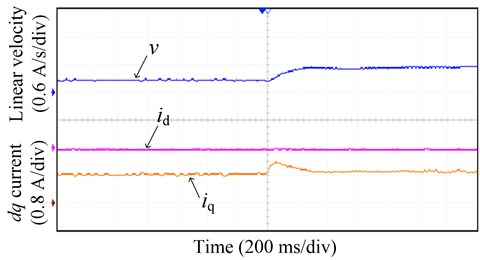 It can be seen from the Fig. 10 that the proposed algorithm can effectively reduce the current harmonic and thrust ripple of open winding PPMLM, so as to reduce the motor loss and improve the system performance.

For the open winding PPMLM driven by dual inverter, a deadbeat two-vector MPCC is proposed in this paper. The proposed algorithm obtains the optimal voltage vector of the dual inverter through the deadbeat current control principle. Therefore, compared with the traditional MPTC and MPCC, the control complexity is greatly reduced and the problem of weight coefficient adjustment is avoided. Because inverter 2 has two optimal voltage vectors synthesized to approximate the reference vector in each switching cycle, it can effectively reduce the current harmonic distortion and thrust ripple, and improve the driving performance and system efficiency. Simulation and experimental results show the effectiveness of the proposed algorithm.

This work was supported in part by the Jiangsu Natural Science Foundation of China (Project No. BK20191225) and Zhenjiang Key R&D Project (SH2020005).