Copyright © 2022 Sridhar N Shastry, et al. This is an open access article distributed under the Creative Commons Attribution License, which permits unrestricted use, distribution, and reproduction in any medium, provided the original work is properly cited. 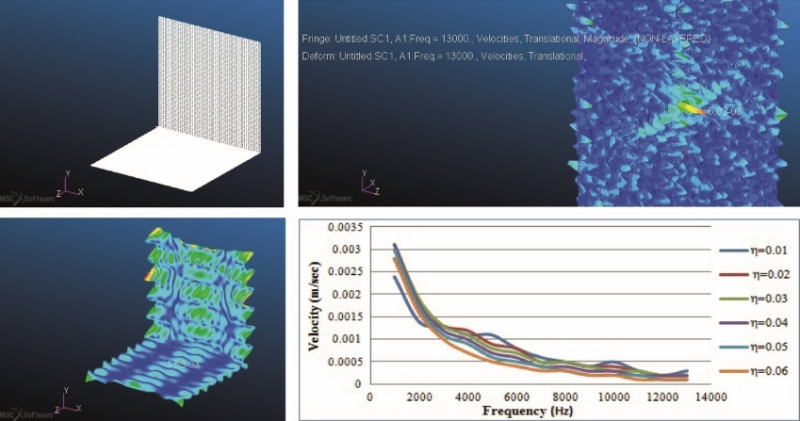 The analysis of complex structure subjected to dynamic loads can be studied in two different ways. The low frequency region is dominated by resonance peak and solved by deterministic approach. In the high frequency region, modal overlaps are high and cannot be solved using deterministic approach. SEA developed in early 1960’s [1, 2] can be used to predict vibration response of the structures subjected to high frequencies. It has a wide range of applications from automobiles to aerospace structures. SEA divides the complex structure into coupled subsystems, where the exchange of energies takes place. As pioneered by Lyon, SEA deals with computation of exchange of energies between subsystems using statistical approach. The exchange of energies between coupled subsystems has been studied by Scharton and Lyon [3], Newland [4] and Lyon and Eichler [5]. The SEA parameters of any structural problem subjected to high-frequencies can be computed by analytical approach using classical wave method [1], numerical approach using finite element analysis [6], experimental approach using power injection method [7], and receptance approach using green function method [8]. The CLF can also be determined by transient statistical energy analysis [9], experimental statistical energy analysis [10] and other hybrid methods.

It is important to study the vibration levels and high frequency noise response in aerospace and marine structures which mainly consist of stiffened plates. Composite materials have a wide range of application from marine structures, aerospace to automobile industries. It is essential to design these structures not only for static and low frequency vibrations (dynamic) but also for high frequency vibrations. This is mainly because of material properties like low density, high specific strength and high specific modulus. Different forms of composites like laminar composite structures, sandwich structures and honeycomb sandwich structures are used in building various components of aerospace and marine structures. In case of laminate composite structure, layers of lamina will be stacked and cemented in a particular sequence such that fibre orientation can be varied in each layer to match the required laminate property.

The standard power balance equation for an SEA model is based on the following assumption:

1) The energy flow between two coupled subsystems is relative to the differentiation in the subsystem modal energies.

2) The power loss in the subsystem is only due to internal damping loss factor , and the subsystem vibrates with energy when an input power is given.

The standard power balance equation is given by:

The power balance equation is given by:

where the power transmitted between subsystem and is given by:

The power balance equation can for n sub systems is given by: 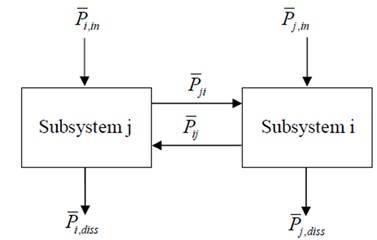 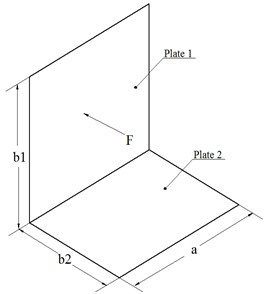 where, is average modal frequency spacing, is the transmission co-efficient.

Average modal frequency spacing is given by:

Longitudinal wave speed for composite laminate is given by:

where, and are Elastic modulus in and directions respectively, is the density of the orthotropic material considered, and and are the poissions ratio.

Bending wave speed for composite laminate is given by:

Transmission co-efficient for composite laminate is given by:

where is the force impedance in -direction and is the number of subsystems connected at a common joint.

Force impedance is given by:

The numerical analysis of the L-shaped structure (Fig. 3) has been carried out using Nastran/Patran software [12]. The SEA parameters have been computed for various orientation of the fibre lay-up. The structure was meshed with quad 2D shell elements having orthotropic lay-up properties.

A harmonic analysis with unit force was carried-out on the L-plate configuration, with a frequency range of 0-13000 Hz with an interval of 1000 Hz. The harmonic force is applied on first plate and vibration response on both the plates was computed. Velocity response at each node was determined on both the plates using Nastran/Patran. Post-processing was done by inversion technique [14] to compute velocity response on whole plate and coupling loss factors. 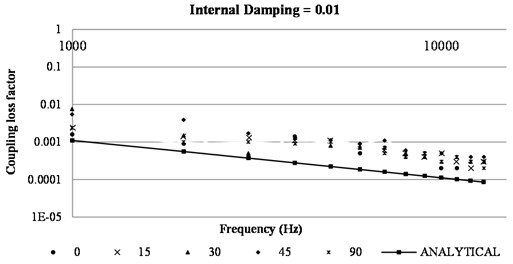 Fig. 5. Variation of velocity in plate 1 vs frequency for different fiber orientation 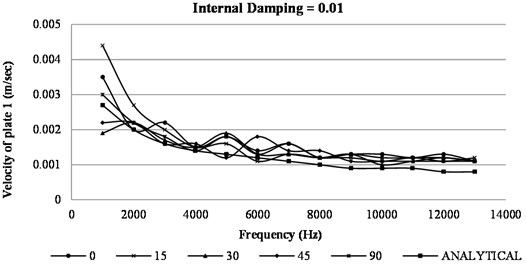 Fig. 5 shows variation of velocity in plate 1 with frequency. The graph is plotted for different fibre orientation. It can be observed from the graph that the velocity decreases with increase in frequency. This is because of the obvious reason that the amplitude of vibrations decreases at high frequencies as result of decrease in magnitude of average modal energy. Modal energy is proportional to square of the amplitude. Also, it can be seen that for different fibre orientations the velocity response computed numerically is scattered at the low frequencies and merges with analytically computed values at high frequencies. It can be observed that the velocity response computed analytically is independent of fibre orientation.

Fig. 6. Variation of velocity in plate 2 vs frequency 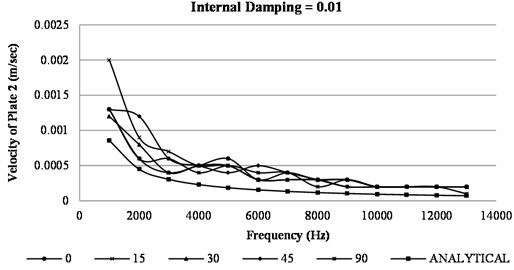 Fig. 6 shows variation of plate 2 velocity with frequency. In this case also, the computation of velocity response by analytical approach is independent of fibre orientation while numerical approach is able to capture the change in response with change in fibre orientation. Responses were computed on both the plates after applying harmonic load on plate 1; magnitude of velocity in plate 1 is higher compared to that of plate 2. 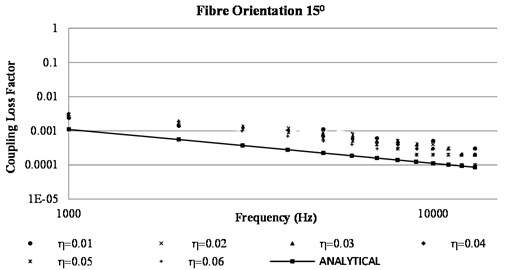 Fig. 8. Variation of velocity in plate 1 vs frequency 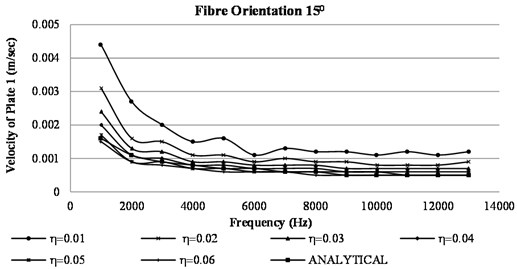 Fig. 9 shows variation of plate 2 velocity with frequency. In this case also the computation of velocity response by analytical approach is independent of internal damping. The results obtained by numerical approach were able to capture the change in response with change in internal damping. The harmonic force was applied on plate one and responses were computed on both plates, magnitude of velocity in plate 1 is higher compared to that of plate 2.

Fig. 9. Variation of velocity in plate 2 vs frequency 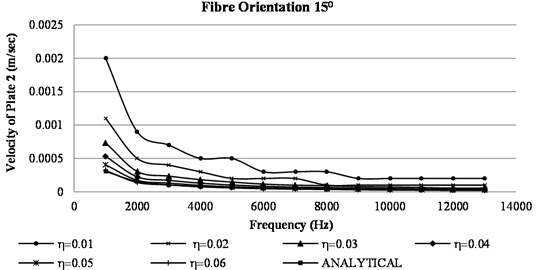 The results of velocity response and coupling loss factors were plotted for the L-plate. The parametric studies on the composite plate were carried. First the effect of fibre orientation on SEA parameters were computed both analytically and numerically. Later the effect of internal damping was studied. It can be observed that, the results obtained through analytical approach were independent of both fibre orientation and internal damping factor. The analytical approach does not take into account the change in fibre orientation and internal damping, while the numerical method is able to determine the SEA parameters appropriately. The analytical formulation was carried on the concept of conventional SEA. The conventional SEA is not efficient because of the lack of modal information at high frequencies. This modal information has to be determined analytically using discrete singular convolution method for the orthotropic plates which further increases the mathematical complexity of the structure. It becomes tedious and time consuming, while numerical method predicted more reliable results at ease. Hence the study reveals that for the orthotropic materials, and especially for the laminate structures, numerical method is appropriate compared to that of analytical method. It was observed that, the difference in velocity response of plate 1 and plate 2 was significantly high at low frequencies for both fibre orientation and internal damping. Though the differences in velocity response reduced at high frequencies after 7000 Hz, it showed significant difference in the value of coupling loss factor. Hence, to study the orthotropic materials especially the laminate structures, numerical method is appropriate compared to that of analytical method.