Copyright © 2021 Guangbin Wang, et al. This is an open access article distributed under the Creative Commons Attribution License, which permits unrestricted use, distribution, and reproduction in any medium, provided the original work is properly cited.

The key to the evaluation of bearing performance degradation is to extract sensitive characteristic indicators that can reflect the degradation process. In order to solve the problem of insufficient sensitivity of the bearing multi-source signals feature, a fusion entropy ratio feature based on dynamic time warping is proposed. First, the segmented approximate entropy, sample entropy and fuzzy entropy of the bearing performance degradation process are extracted, and then the mean clustering is used to obtain the standard entropy vector of the health state. In order to eliminate the influence of working environment and entropy value on state evaluation, a concept of entropy ratio is defined by the ratio of the entropy vector of each state to the standard entropy vector of the health state. Finally, using dynamic time warping has the advantage of accurately describing the similarity between vectors from a global perspective, and the multi-source heterogeneous fusion entropy ratio distance feature is constructed to describe the degraded state of bearing performance. Experiments show that this feature is more sensitive to the bearing performance degradation than other features, such as fusion entropy ratio feature based on Euclidean distance, single entropy ratio feature based on dynamic time bending.

The key to accurate evaluation of machinery equipment’s state is to find sensitive indicators that reflect the degradation process. The most common way to construct performance degradation indicators is to extract root mean square, cliffness, wavelet energy, etc. [1-3], but it is difficult to install sensors in the narrow space, so the common method is to find the bearing status by monitoring the signal far away from the vibration source [4]. The development of artificial intelligence has led to an increasing number of studies using advanced algorithms such as genetic coding, neural networks, and deep learning for bearing service performance evaluation [5-7]. In the construction of information fusion evaluation index, since many physical quantities such as oil granularity and temperature do not have parameters of characteristic frequency, multiple information entropies are commonly used to construct feature values [8-9], but these literatures generally construct entropy improvement features based on single physical quantity signals, and do not consider the fusion of multi-source heterogeneous signals. In this paper, we propose a multi-source heterogeneous fusion entropy ratio distance feature based on dynamic time bending for bearing performance degradation.

The Eq. (1), entropy is a function of the probability distribution about the variable , the probability of taking the negative logarithm indicates the amount of information carried out when a possible event occurs. There are many types of information entropy, such as approximate entropy, sample entropy, fuzzy entropy, permutation entropy and so on. Suppose the vibration, strain and axial force signals of a bearing are monitored, and its approximate entropy, sample entropy and fuzzy entropy are extracted respectively, and define , and as the vibration entropy vector, strain entropy vector and axial force entropy vector, then:

Using these entropy vectors, a multi-source heterogeneous entropy characteristic matrix that can characterize the degradation state of the bearing performance is constructed as follows:

Assume bearing status data are sampled at 1 second intervals, and points are sampled in one sampling period. Assuming that the bearings are in a healthy state during the first seconds, extract the multi-type entropy values of these multi-source physical quantities, and construct multi-source heterogeneous fusion features, and then the healthy standard entropy features are obtained by mean clustering as follows:

In the multi-source heterogeneous vector, each physical quantity eigenvalue has a large difference between different physical quantities despite the fluctuation, and the entropy ratio characteristic is that each entropy in the vector is divided by the corresponding healthy standard entropy, defined as , and the multi-source heterogeneous fusion entropy ratio characteristic at the moment of as follows:

The dynamic time warping (DTW) [10-11], has been proved to be an extremely strong distance metric for time series, whose main idea is to adjust the correspondence between time points and guide to find the best matching path between data in two arbitrary long time series, which can effectively avoid the Euclidean distance mismatch caused by the response time delay between different physical quantities.

It is assumed there are two feature vectors and , which form the distance between the data points of the two sequences, where , ., , then DTW is to find a continuous path from this matrix such that the sum of the element values on the path is minimal and the three conditions of boundary restriction, continuity and monotonicity are satisfied. The path can be implemented by dynamic programming by defining the accumulation matrix as the shortest path from the starting position to the ending position, then we have:

The DTW can be obtained as:

DTW describes the closest distance between all feature points, so it can describe the similarity of two vectors more accurately, and also can solve the problem of inconsistent length between two variables. According to the above analysis, Our algorithm steps are as follows:

Step 1: Collect the multi-physical quantity monitoring data of the whole life cycle of bearing operation, here it is assumed that the sampling is vibration, strain and stress data, i.e. , the data is pre-processed, and the bearing status is divided into four stages of healthy state, early fault, mid-term fault and late fault by observation.

The main bearing of aero-engine is a high-speed bearing, the maximum speed can be more than 30,000 r/min, which often adopts the elastic support structure, as shown in Fig. 1, and the monitoring data are the vibration at the bearing position, the strain at the patch position and the axial force, as shown in Fig. 2. The main bearing is ultimately t inner ring, outer ring and rolling body all failed. The sampling frequency is 10000 Hz, the sampling time vibration is 2.4718 seconds, the strain, the front force is 2.6210 seconds, the first 2.4 seconds are taken as the analysis data. The analysis data were divided into 80 equal segments, and each segment are 0.03 seconds. The approximate entropy, sample entropy and fuzzy entropy of each segment were calculated separately, and the segmented entropy and normalized entropy change graphs were obtained as shown in Fig. 3. 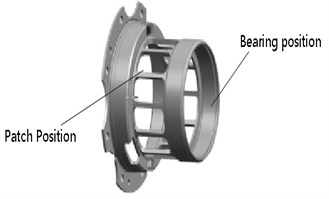 Fig. 3. a) Three entropy and b) normalized entropy for vibration, strain, and forward axial force 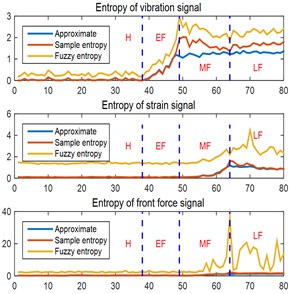 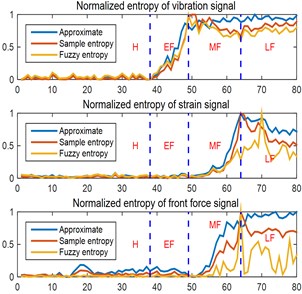 Fig. 4. a) The change of fusion entropy and b) entropy ratio during performance degradation 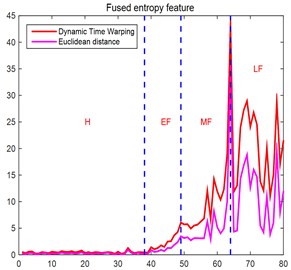 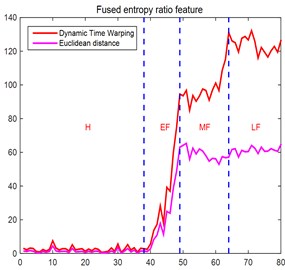 Table 1. Multi-source fusion entropy and entropy ratio based on to reaction of the fault stage

Table 2. Multi-source fusion entropy and entropy ratio based on to reaction of the fault stage

Because the performance degradation is mainly to determine when the degradation occurs and when it is severe enough to fail, it is mainly to discriminate the sensitivity of the eigenvalues of the early and mid--term fault stages, the results are shown in Table 1 and Table 2. The interval amplitude ratio represents the absolute change of the signal feature strength, and the interval slope represents the sensitivity of the signal feature to fault stage. As can be seen from Fig. 4, Table 1 and Table 2, Whether it is early or mid-fault, multi-source heterogeneous fusion entropy ratio feature based on has the greatest sensitivity and feature strength compared with fusion entropy ratio features based on .

Fig. 5. The change law of bearing entropy ratio features with the stage of bearing performance degradation 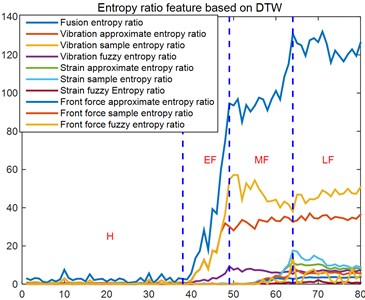