Copyright © 2019 Guozeng Liu, et al. This is an open access article distributed under the Creative Commons Attribution License, which permits unrestricted use, distribution, and reproduction in any medium, provided the original work is properly cited.

Bearings are one of the most crucial elements in rotating machine. The condition of bearings decides the operation of machine. Consequently, it is necessary to study the assessment of bearing degradation in order to develop condition-based maintenance. This paper improves an indicator based on entropy which is calculated by wavelet packet decomposition and auto-regressive model. By introducing time parameter, the indicator solves the problem of instability in the initial stage of operation and it is less influenced by the operational conditions. Then, fuzzy c-means clustering can evaluate the process of degradation. Moreover, it can provide the threshold adaptively and help to repair by unit replacement. To ensure the applicability, the data of this paper comes from two laboratories, FEMTO-ST Institute and Intelligent Maintenance System Center. The result indicates that the method is effective to assess bearing degradation process. 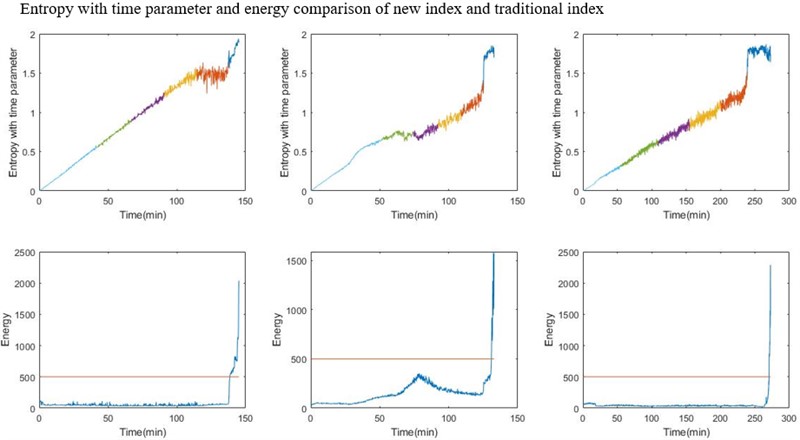 Bearings play a significant part in most rotating machinery as a crucial component of manufacturing industry. The failure of bearings will lead to downtime and economic loss in industrial production [1]. So, the real-time monitoring and prediction of bearing degradation will help the condition-based maintenance (CBM) [2, 3].

At present, most approaches for bearing degradation assessment is based on the vibration signals. Researchers have proposed lots of methods to get the indicators from signals mainly including time domain, frequency domain and time-frequency domain analysis [4]. Fourier transform is an elementary method to turn the time domain into frequency domain. Some indicators of both are widely used to express the features of bearings, such as Root Mean Square (RMS), energy, kurtosis, skewness, mean frequency, frequency center and so on [5]. Only time domain or frequency domain cannot show the non-stationary signals completely. The time-frequency domain solves the problem by reflecting the frequency changing according to time. Short-time Fourier transform (STFT) [6], Wavelet transform (WT) [7] and Hilbert-Huang transform (HHT) [8] are typical methods to get the time-frequency. STFT does not have adaptive ability. WT is not accurate enough in high frequency. HHT will lead to end effect and Gibbs phenomenon [9]. To decrease the lack of the methods, some other ways were proposed. Auto-regressive (AR) model is usually used to estimate the spectrum [10]. It helps analyze short signals and reduce interference among signals. The methods above are unable to set up a single indicator to express bearing degradation process and will lead to abundant numerical computations in the assessment. Some researchers put up with entropy is an ideal indicator, but entropy cannot perform the initial degradation and may be influenced by operational condition a lot [11].

In addition to degradation feature extraction, estimating degradation condition is also an important part in CBM [12]. Researchers come up with some methods such as Artificial Neural Network (ANN) [13], Hidden Markov Model (HMM) [14], Support Vector Machine (SVM) [15], Gaussian mixture model (GMM) [16] etc. These methods are always combined with multi-data and will be a burden with the amount of data increasing. Besides, they are not good at processing single dimensional data. Fuzzy c-means clustering can deal with both single dimensional data and multidimensional data. Its algorithm is efficient, accurate and usable [7].

This paper uses wavelet packet decomposition, AR model and entropy with time parameter to perform the process of degradation. Then, fuzzy c-means clustering method will help to evaluate the degradation state and warn the failure of bearings.

Wavelet packet decomposition is also called subband tree or optimal subband tree structuring. It uses parse tree to indicate wavelet packet. Wavelet transform is a popular method to process non-stationary signals [17, 18]. Comparing with short time Fourier transform, it can reduce computations when examining specific frequencies and giving a flexible time-frequency domain feature because of the use of variable sized windows. However, wavelet transform only decomposes low frequency signals and that leads to reduction of time-frequency resolution with the increase of frequency. Wavelet packet decomposition solves the problem and has a better resolution in high frequency signals. Besides, it draws into the concept of optimal basis selection to select optimal basis function flexibly. The process of wavelet packet decomposition is as follows [19].

Assume that is scaling function and is wavelet function. The basic wavelet packet functions are defined as:

where and are the quadrature mirror filters.

For a discrete signal, the decomposition coefficients of wavelet packets can be computed iteratively by:

Fig. 1. An example of a three-level wavelet packet decomposition tree

From Eqs. (2), (3), signals can be decomposed into level and the level will get part of signals by frequency. For example, a wavelet packet decomposition tree of three levels is illustrated in Fig. 1.

where , …, are the parameters of the model, is a constant, and is white noise.

Eq. (3) can be regarded as an input or output equation to a system. Single side spectrum of signals can be calculated by transfer function:

where . In this paper, every subband will be reconstructed by AR model spectrum, and the details of subband can be more entire [21].

In information theory, entropy is the probability of discrete random evens and is sometimes referred to as Shannon entropy. In other words, the entropy increases as the certainty of variable increases and the information to understand will increase. Then, the signals of healthy bearing will provide orderly and steady information. When the bearing is running to failure, the system of bearing will be unsteady, and the signals will provide unordered and chaotic information. Entropy can perform the condition of information in the degradation process of bearing. It is a fine index to describe the degradation state. Entropy is defined as:

where is the probability of a discrete set [22].

At the beginning of operation, the bearing has to work in a wear-in period. That can lead to the fluctuation of entropy in initial stage. To solve the problem, this paper put up with the time parameter which is used to reflect the wear of bearing accumulated over time. The range of time parameter should be between 0 and 1 in order to control the degradation index. Assuming that there are samples in a whole life of the bearing, the time parameter () of the th set of data is:

where is the time of each sample. The parameter is also a dimensionless parameter. That means it is more objective to reflect the rule of bearing degradation. Then, a new indicator, entropy with time parameter () can be calculated in Eq. (8) as:

Clustering is the task of grouping a set of objects in such a way that objects in the same group are more similar to each other than to those in other groups. Fuzzy clustering is always used in the classification when things are blurring. To divide the process of degradation, fuzzy clustering is an ideal method based on fuzzy mathematics [7].

Fuzzy c-means (FCM) is a commonly used algorithm in fuzzy clustering. The FCM algorithm attempts to partition a finite collection . Clustering loss function based on membership function is defined as:

where is membership function, is the center of the th cluster of clusters, is smoothing parameter, and 1. Then, using Lagrange multiplier method to find the and , which make get lowest. When the algorithm converges, the fuzzy clustering will finish [23].

In this paper, is used as the finite collection to divide stages. The time and threshold of the last stage can be regarded as the warn of bearing failure. Flowchart is shown in Fig. 2.

The bearing run-to-failure data used at this session have been obtained from FEMTO-ST Institute and Intelligent Maintenance System Center (IMS). In the experiment of FEMTO-ST Institute, the load is applied to the bearing radially in horizontal direction. Its vibration signal data is collected at a sampling frequency of 25.6 kHz every 10 s for 0.1 s. When the acceleration amplitude exceeds the threshold of 20, the bearing is considered failure. This paper uses the six groups of run-to-failure data and the operation condition is shown in Table 1.

Taking bearing 1-2 as an example, use WPD to decompose the vibration signal into 8 subband at first. And the energy of each subband will be obtained by AR model spectrum analysis, which is shown in Fig. 3. 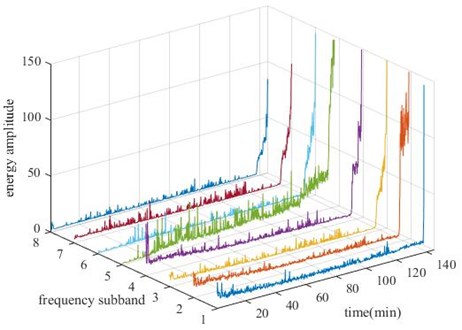 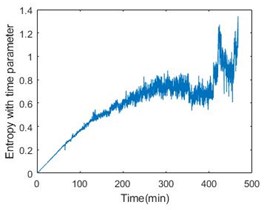 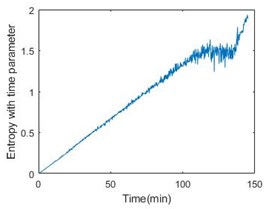 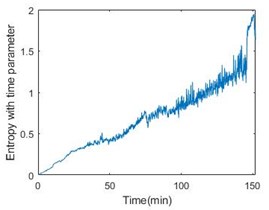 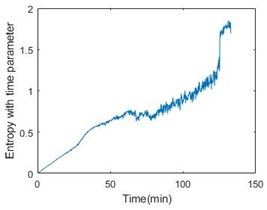 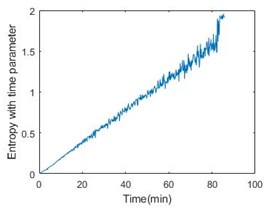 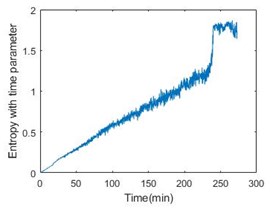 Then, calculate the entropy according to Eq. (6) and it is shown in Fig. 3, from which it is obvious that the bearing is not stable at the beginning of operation. Introducing the time parameter will make the feature more effective. The feature of six bearings is shown in Fig. 4.

Since the entropy with time parameter has been obtained, fuzzy c-means clustering can be used to estimate the state of bearings. In this paper, it is appropriate to divide the operation into 6 stages. Taking bearing 1-2, bearing 2-2 and bearing 3-2 as examples, Fig. 5 gives the result of clustering.

Fig. 5 also gives energy of the bearing. From the comparison, the stage can perform the degradation process. More importantly, the last stage will become a nice warning of bearing failure. Table 2 shows the details of all the six bearings. From the table, the threshold time is less than 15 % ahead of failure time.

To confirm the effectiveness of the method, the paper also adopts the data from IMS. The experiment of IMS provide the vibration data at a sampling frequency of 20 kHz every 10 min for 1 s in No.2 set. In the set, there are 4 bearings working in 2000 rpm and a load of 6000 lbs for about 163 h. The result is shown in Fig. 6 and Table 3. The threshold time is also less than 15 % ahead of failure time. Obviously, the method of degradation evaluation has good universality.

Table 2. Details of the 6 bearings

Fig. 5. Entropy with time parameter and energy comparison of the 3 bearings 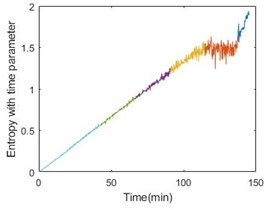 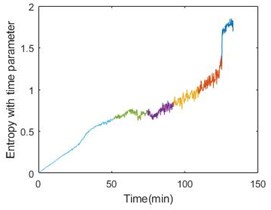 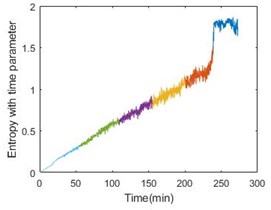 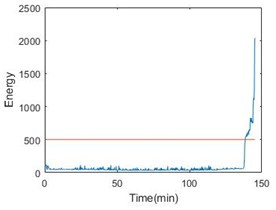 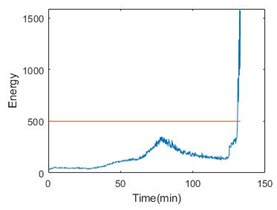 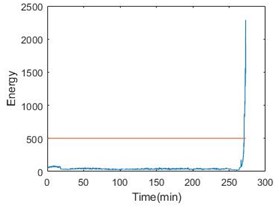 Fig. 6. Entropy with time parameter and energy comparison of the 1-3 bearing 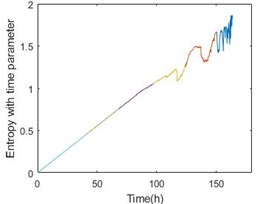 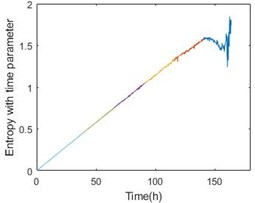 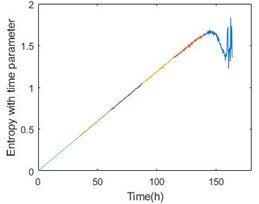 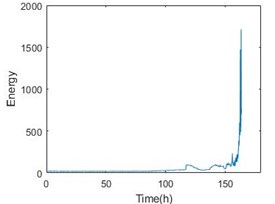 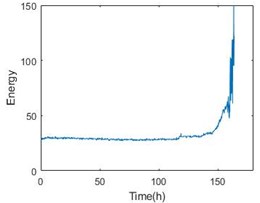 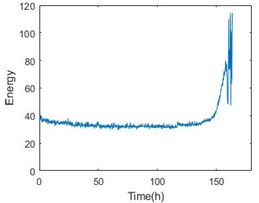 Table 3. Details of the 4 bearings

This paper proposes a method to express the degradation feature and evaluate the process. The entropy with time parameter based on WPD and AR model provide a steady index in the life of bearing operation. The index solves the problem of fluctuation when the bearing is working in the initial stage of operation. In addition, the optional condition influences the index less. Even though the revolution and load change, the index will stay in a stable range. Then, fuzzy c-means clustering base on the indicator divides the process into several stages which can help evaluate degradation process. In industrial practice, the method is able to monitor the bearing in real time and get the threshold adaptively when repairing by unit replacement. It can also provide a scheme for condition-base maintenance.