Copyright © 2022 Min Duan, et al. This is an open access article distributed under the Creative Commons Attribution License, which permits unrestricted use, distribution, and reproduction in any medium, provided the original work is properly cited.

As the most front-end equipment in the monitoring system, sensors are the main means of obtaining information about the response of various environments and structures, and their performance will directly affect the subsequent structural damage identification and structural safety assessment. In this study, the influence of the scale of the fault on the diagnostic effect of the proposed method was analyzed, and the results showed that the sensitive principal component analysis (SPCA) method can identify smaller-scale faults and significantly improve the fault detection capability compared with the traditional PCA method.

Therefore, the crucial question is how to theoretically quantify the fault sensitivity of PCA in each main direction from the only available monitoring data. In this study, a fault-sensitive factor is theoretically deduced to solve this problem, and then a sensitive principal component analysis (SPCA) method is proposed that can improve the fault detection capability.

Because the statistic and the square prediction error (SPE) omit information associated with faults, this omission may deteriorate the fault sensitivity. Therefore, to further improve the fault detection capability, one must consider that each principal direction of the principal component analysis (PCA) has different fault sensitivities for the same fault occurring in a particular sensor.

The measurement data are decomposed into a principal subspace and a residual subspace after principal element analysis. Each row vector in represents a measurement sample of the sensor at a specified moment, and the PCA-based statistic can be further expressed as:

where is the statistic defined in the th principal direction of the PCA:

For the PCA-based statistic, the weights in Eq. (1) are:

Similarly, the PCA-based SPE() can be further expressed as:

where represents the residual space , and is the th principal component direction . Subsequently, the weights in Eq. (4) are:

3. The diagnostic effect of three methods when a gain fault, deviation fault, and stuck fault occurred

The effect of various fault scales on the detection results is discussed. For all sensors, the failure amplitude and the fault size b are adjusted to compare the recognition effect of SPCA under different fault scales, and the results are shown in Fig. 3 and Fig. 4. The 1 to 10 in the figure legend are the sensor numbers. 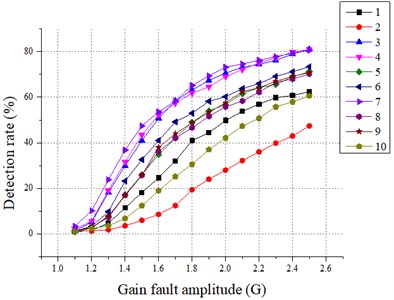 Fig. 4. Relationship between fault size (b) and SPCA test results 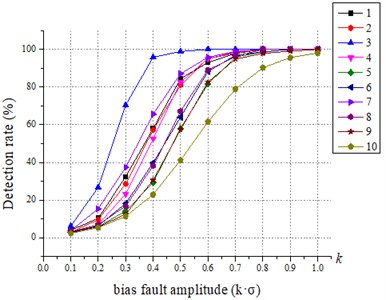 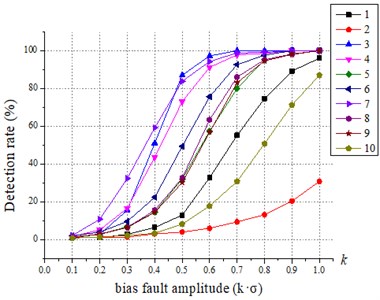 Numerical simulation studies have shown that the sensor fault diagnosis method based on SPCA can effectively detect and isolate bias faults and constant gain faults of sensors. The influence of the size of the fault on the diagnostic effect of the proposed method is analyzed, and the result shows that compared with the traditional PCA method, the SPCA method can identify smaller scale faults, and the fault detection capability is improved significantly.