Copyright © 2022 Zeynep Ekşi, et al. This is an open access article distributed under the Creative Commons Attribution License, which permits unrestricted use, distribution, and reproduction in any medium, provided the original work is properly cited.

Today, the use of smart transportation systems has become widespread due to the change in the structure of cities, technological developments, and the increase in the number of vehicles. It aims at targets such as reducing the damage to people and the environment by increasing traffic safety with smart transportation systems. In addition, one of the big problems of long-distance drivers is falling asleep while driving. This is an event that puts both the driver’s life, the passengers in the vehicle, and the vehicles on the road in danger, and puts the company in a difficult situation if it works for a company. In this direction, the driver sleep alarm project has been developed. This project is a control system based on monitoring the user, measuring, and analyzing their movements. Literature research, which is the first stage of the project, was conducted and research continued throughout the project process. Within the scope of this project, a headset was designed for the driver’s sleep alarm and a mobile application was created. The first prototype of the project was built. First, in the project, the angle values made by the driver's head were produced with the IMU connected to the microcontroller. 10° to 20° margins identified as sleeping state for roll, pitch, and yaw angles. Later, a wearable headset was designed for the driver. Based on these angles produced in the microcontroller, an algorithm has been created that detects whether the driver is asleep. These generated angle values and status information were transferred from the headset to the mobile application via Bluetooth. This data transferred in the mobile application is reflected on the screen. In addition, an algorithm has been created in the mobile application, which sends a notification to the driver when sleep status is detected and sends an informative SMS to the headquarters if the driver is unresponsive to this notification. For the second prototype, it was aimed to produce a PCB for the headset and thus make a new mechanical design. Data mining applications are planned with the collected data from drivers for future works.

Many deaths occur today due to drowsiness, fatigue, and drowsiness of the driver. This is an event that endangers the life of the driver, the passengers in the vehicle, the vehicles, and pedestrians on the road, and puts the company in a difficult situation if it works for a company. With the development of technology, different methods have been developed to detect driver fatigue in advance and to prevent this situation. They can basically be divided into 4 categories: bio-based detection, physical-based detection, vehicle-based detection, and hybrid-based detection.

Biological signals can be used to detect fatigue and sleep status. It can be classified as heart, brain, eye, and skin-based signals. Signals such as electroencephalography (EEG), electrocardiogram (EKG), electro-oculography (EoG), and surface electromyogram (EMG) are used to detect this condition. As a result of the research, the accuracy rates of these methods are satisfactory [1].

On the detection of drowsiness, there are successful projects such as a probability model and a smart watch-based wearable EEG device, a detection system using wireless wearable sensors [2], using a Support Vector Machine (SVM) [3], and the development of six classifiers based on the sEMG feature. There are also projects in which head movements and facial expressions are used [4-7]. It is seen that these system designs are not sufficient on their own and the systems require a high level of optimization. It is recommended to use methods such as deep neural network model embedded system [8], vehicle-based detection or an online fatigue detection method based on steering angle data [9], and Hybrid Feature Based Detection for modeling systems. In this article, the detection method based on the physically based head position situation is used. While the most important factor in the selection of this method includes the methods that mostly require a camera and affect the driving performance of the driver, the detection method based on the physical-based head position has been adopted here.

In this study, a headset to hang on the ear of the vehicle driver is designed. The designed headset measures the driver's head angle and decides the sleep state by using the vehicle's navigation system. If there is a possibility that the driver may have fallen asleep or had an accident, the application running on the navigation system sends an SMS message to the monitoring center with the status and vehicle coordinates.

The system consists of an ABS-based structure produced with a 3D printer and IMU (Inertial Measurement Units), Bluetooth Module, Microcontroller (MCU), and Battery placed on this structure. The system uses the possible movement planes of the press. In this study, DMP Data Fusion was used to measure roll, pitch, and yaw angles.

The product designed on Fusion 360 was printed with a 3D printer as shown in Fig. 1. The design, which was first made in Fusion 360, was transferred to Ultimaker Cura to print the product from the 3D printer. Ultimaker Cura is slicing software for 3D printers. It translates the 3D model into G codes that the 3D printer can understand. Necessary settings for printing were made on Ultimaker Cura. These settings are the shape and size of the design, the temperature of the printed material, the adjustment of the places where support is needed, etc. while printing. are settings. The file with the generated G codes was uploaded to the 3D printer and 3D printed. Ultimaker 2+ was used for the 3D production of the headset. Table of production parameters are also given in Table 1.

After the mechanical design is drawn and produced from a 3D printer, the components that were soldered before are placed inside the headset.

A comparison the product with other similar products is given in Table 2.

In this study, the driver's sleep state was estimated by calculating the angle of the driver's head according to the head position. The design realized with Arduino pro micro, GY87 IMU and HC05 Bluetooth and the goal has been achieved with the angle values given in Table 3. 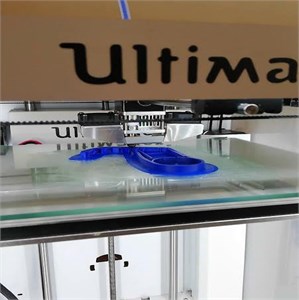 a) Printing of the headset case 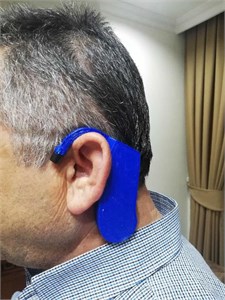 b) Usage of the headset

A headset has been designed to keep these modules that detect the head position and to be worn by the driver. According to the results, it was thought that this design could be reduced. Then, an interactive mobile application was designed to follow the driver. Thanks to this application, when the driver is predicted to be asleep, an alarm is sent to the driver. Despite this estimation being wrong, the driver was given 5 seconds to stop the alarm. For the alarm that is not stopped within 5 seconds, an SMS was sent to the headquarters of the driver.

In this project, it is aimed to make a product that works in accordance with its purpose. As a result of the project, the product targeted criteria were realized.

This design can be used for monitoring fleet drivers. A project can be developed to determine sleep tendencies and factors that cause sleep.

For now, from 10° to 20° limit angles are identified of sleeping state for roll, pitch, and yaw for the headset, but a self-calibrating system is planned for future studies.

Artificial intelligence and machine learning methods will be used with the collected data from drivers to learn where and in what conditions drivers sleep or accidents happen [10, 11].

In the planned studies, it is envisaged to use system identification methods like airplane calibration systems, so that the headset can self-calibrate [12]. Also, this product will be produced with plastic injection method instead of 3-D printing, using lean production techniques and innovative design techniques, with less cost and less errors [13, 14].

This project was supported by Alışan International Transports Company.

The project team received an incentive award with the success of 2242 University Students Research Projects Competitions held under TEKNOFEST Aviation, Space and Technology Festival organized by The Scientific and Technological Research Council of Turkey (TÜBİTAK).