Copyright © 2019 Zhenyu Gu, et al. This is an open access article distributed under the Creative Commons Attribution License, which permits unrestricted use, distribution, and reproduction in any medium, provided the original work is properly cited.

As an important characteristic information in incipient fault diagnosis of rotating machinery, the fault impulse signal is hard to be monitored due to the low signal amplitude and system disturbance/noise. Based on bilateral spectrum and precession energy difference density spectrum for the incipient fault diagnosis of rotating machinery, a novel diagnosis method is proposed in this paper to overcome this key problem. Compared with the existing methods to extract transient impulses from the vibrate signals, this paper designs a new fault feature parameter-precession energy difference density to characterize the feature of transient impulse. Furthermore, the complex signal and the negative frequency are introduced into the spectrum analysis and the forward and backward precession characteristics, which can be directly gained through the bilateral spectrum and relieves the problems not to be overlooked, such as high calculation, high error and time consuming. Finally, the feasibility and effectiveness of the proposed methods are demonstrated via a case study of a vertical mill reducer.

Time-frequency transform analysis of vibration signal is one of the most widespread and effective method among the existing methods to incipient fault diagnosis [1, 2]. Most of the vibration signals of rotating machinery are non-stationary and nonlinear signals [3, 4]. The main methods of dealing with such signals are including Short-time Fourier Transform [5], Wavelet transform [6], quadratic time-frequency distribution, Empirical Mode Decomposition, etc. [7-9]. Zhao [10] et al. proposed an instantaneous speed estimation method based on short-time Chirp-Fourier transform. And it is used to detect the incipient fault of a gearbox during the non-stationary working conditions. Wavelet transform is another technological innovation after Fourier transform, which can provide both the time domain and frequency domain information of the localized signal. Based on the characteristics of adjustable wavelet of quality factor, Luo [11] et al proposed an adaptive demodulation method. The method reconstructs the signal according to the kurtosis value of the wavelet and applies it to the bearing fault diagnosis. The quadratic time-frequency distribution uses a bilinear transformation rather than a linear transformation, so there is serious cross-term interference for multi-component signals. Adaptive time-frequency analysis can not only reflect the characteristics of instantaneous frequency with time-varying, but also accurately reflect the changes of signal energy with time and frequency. Zheng [12] proposed a new adaptive time-frequency analysis method based on improved local characteristic-scale decomposition.

The essence of these non-stationary signal processing methods is similar. The non-stationary signals are divided into a great many of small segments, and each small segment can be regarded as a stationary or cyclostationary signal. Therefore, the traditional spectrum analysis technology still has important research significance and a very wide range of applications in the rotating machinery fault diagnosis for its simplicity and intuitive [13-15]. The most representative spectral analysis technologies are holospectrum technology [16-18], full-spectrum technology [19] and vector spectrum technology [20, 21]. These three technologies have their respective merits and have been widely used in engineering. However, these methods obtain forward and backward precession parameters through a series of mathematical operations, which will inevitably increase the amount of calculation and analysis error. This makes it difficult to apply these methods to effective diagnosis of the incipient fault.

Periodic transient impulse is an important characteristic information in incipient fault diagnosis of rotating machinery. However, it is very difficult to monitor this fault impulse signal because the amplitude of this signal is rather low and always covered by system disturbance and noise easily. Compared with the existing methods of extracting transient impulses from the vibrate signals, a novel scheme is adopt in this paper. Due to the physical mechanism of periodic impulse, the energy of the impact would act on the forward or backward precession of the rotor. In this paper, a new fault feature parameter - precession energy difference density is designed to characterize the feature of transient impulse, and a new diagnosis method is proposed based on bilateral spectrum and precession energy difference density spectrum. The main contributions of this paper include (1) the complex signal and the negative frequency are introduced into the spectrum analysis and the forward and backward precession characteristics can be directly gained through the bilateral spectrum; and (2) a new fault feature parameter-procession energy difference density is designed to characterize the feature of transient impulse of rotating machinery incipient fault. 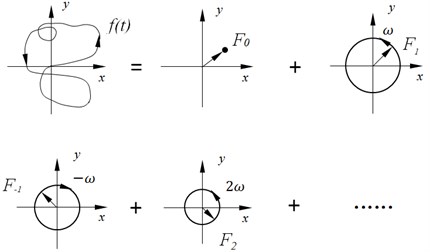 The rotor system is simplified as a disc, which is mounted on a massless elastic rotation shaft (see Fig. 2). 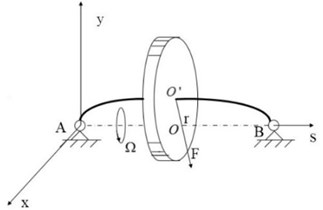 The differential equation of the rotor dynamics model is established as follow:

where is stiffness coefficient of the rotating shaft. Set , then the Eq. (1) can be expressed as:

where , are the displacement amplitude in the direction of and axis, and are the phase angle of , . Suppose is a complex plane, and . Then Eq. (2) can be transformed into free motion equation as:

The solution of Eq. (4) is expressed as the following plural form:

where and , which are determined by initial conditions. is a motion vector of rotor. And its trajectory is an ellipse which is composed of two circles with same frequency and opposite direction.

Periodic transient impulse is an important characteristic information in incipient fault diagnosis of rotating machinery. However, it is very difficult to monitor this fault impulse signal because the amplitude of this signal is rather low and always covered by system disturbance and noise easily. Due to the physical mechanism of periodic impulse, the energy of the impact would act on the forward or backward precession of the rotor. To overcome this problem, a novel fault feature parameter-precession energy difference density is designed in this paper to characterize the feature of transient impulse. The procession energy difference density () is defined as: the ratio between the square difference of forward and backward precession radius and the sum of square of forward and backward precession radius for a certain harmonic frequency, and it can be described as:

Fig. 3. Curve of change with eccentricity 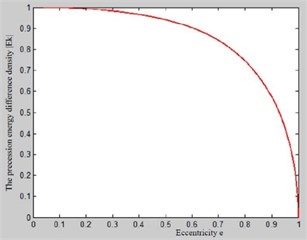 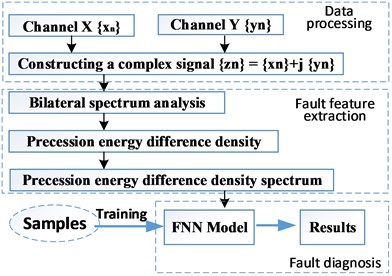 The vibration signals of two channels, and , which are orthogonal to each other on the same section of the rotor are collected by installing the vibration sensors in vertical direction (as shown in Fig. 5). Note that, in order to ensure the data accuracy, the model of sensor, sampling frequency, initial sampling time, data transmission, installation conditions should be highly consistent with each other.

Based on the collected two channel vibration signals (, ), the complex signal () can be constructed as:

A FFT transform is used to get the discrete Fourier transform form of the complex signal . And it can be described as follow:

is a plural sequence. And the feature parameters (,,,) can be obtain by these equations: 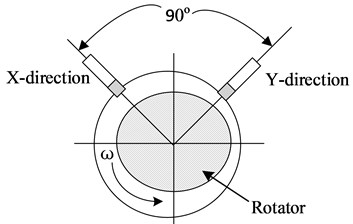 The advantage of bilateral spectrum lies in building the relationship between the forward (backward) precession and positive (negative) frequency, and the calculation process to obtain the feature parameters is simple.

where is the fault feature vector, and is the precession energy difference density of frequency.

After getting the precession energy difference density spectrum, it is necessary to make fault judgment by human or intelligent diagnosis method. In this paper, the FNN-based (fuzzy neural network) fault recognition method is adopted, and the process is as follows:

(1) The input fault feature vector (training sample) can blurred by applying fuzzy theory, and then membership grade of is obtained.

(2) Fuzzy rules are extracted from sample data first. Then, the fuzzy rules are transformed into mapping relations of neural network. Meanwhile the learning result of neural network is transformed into the knowledge rules of fuzzy inference system, which makes the network have the better ability of knowledge expression, data processing and fuzzy inference.

(3) Training the neural network by the learning algorithm to optimize the connection weight and the parameters of membership function until meet the error requirement. The fuzzy rules are dynamically updated also.

(4) Generalize the FNN model by the test samples to confirm the corresponding relationship between the input data and output. After that, FNN can be used to diagnose the fault.

In order to verify the effectiveness of the method, an automatic diagnosis system was developed using Microsoft Visual Studio 2010 and MATLAB R2012b as the integrated development environment. Four type of fault (rotor unbalance, rotor misalignment, rotor rubbing and oil whirl) are test with the historic operation data (from 2013 to 2016) of a vertical mill reducer of a cement factory in Yibin, Sichuan province, china. And the diagnostic results are compared with BP neural network. Under the same training sample and test sample, the diagnosis results of BP neural network (Fig. 6(a)) and this paper method (Fig. 6(b)) are shown in Fig. 6, and the accuracy rates are respectively 90 % and 92 %.

Fig. 6. Diagnosis results of: a) BP neural network, b) this paper method 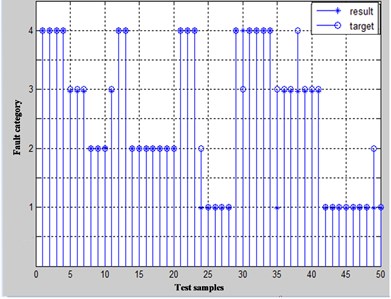 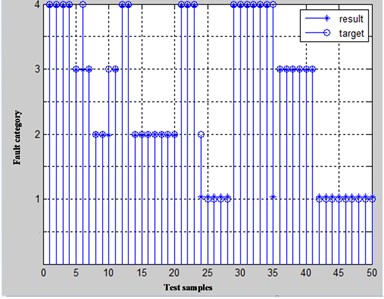 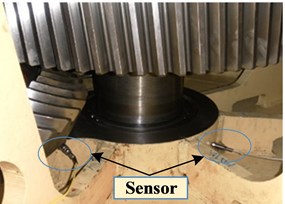 In order to illustrate the process of the method propose in this paper, we take the rotor misalignment data as an example.

The on-site layout mode of vibration sensor is as shown in Fig. 7. It is mounted on the reducer bearing seat. The device frequency is 102.8 Hz, sampling frequency is 2000 Hz, and the length of data processed at one time is 1024 points.

The time domain features of the selected one time processed data are shown in Fig. 8.

Using the method proposed in this paper, the and direction signals are composed into a complex signal first. The bilateral spectrum (Fig. 9) of this signal is obtained next. As shown in Fig. 9, the energy are mainly distributed in 1X, 2X, 3X and 4X. Therefore, these frequencies are mainly analyzed. The procession energy difference density spectrum is plotted as shown in Fig. 10. The fault feature vector can be constructed as an input for FNN. And the result of fault diagnosis is as shown in Fig. 11. 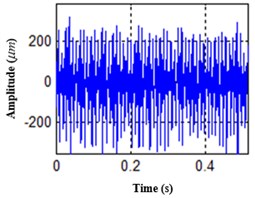 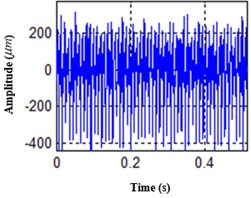 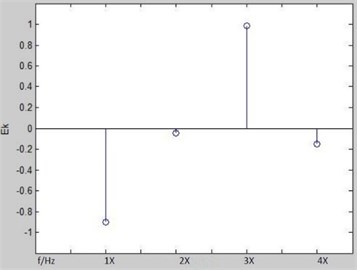 Fig. 11. The result of fault diagnosis 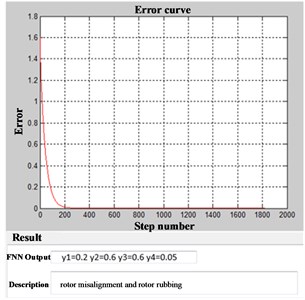 In the bilateral spectrum, the negative frequency is defined as the rotation vector which is opposite to the rotation direction of the rotator, and the positive frequency is the rotation vector with the same direction of the rotator. The positive half-axis spectrum characterizes the positive precession characteristic, while the negative half-axis spectrum represents the backward precession characteristics. The amplitude of the positive and negative frequency components represents the forward and backward precession circles radius. By constructing a complex signal with two channel vibration signal which are perpendicular in the same section of the rotor, then analyzing its bilateral spectrum, the forward and backward precession parameters can be directly acquired. The new fault feature parameter-precession energy difference density can characterize the feature of transient impulse. And the incipient fault diagnosis method for rotating machinery based on bilateral spectrum and precession energy difference density spectrum is effectiveness.