Copyright © 2018 Noureddine Chikh, et al. This is an open access article distributed under the Creative Commons Attribution License, which permits unrestricted use, distribution, and reproduction in any medium, provided the original work is properly cited.

In rotating machines, random movements or sliding movements of the rotor in its housing can produce undesirable phenomena for some parts. To solve this problem, a new hydrostatic bearing with an intelligent magnetorheological elastomer sell bearing has been designed to control the undesirable vibrations of rigid rotors. The different effects of the influence parameters on the vibratory behavior of the sell bearing are calculated numerically using Abaqus software, and the results found are encouraging.

The technological evolution of rotating machinery requires high performance operating conditions in terms of power, rotational speed and load capacity; for example, the critical speed of the rotor at the beginning of operating is a harmful factor limiting the life of the mechanism [1].

The main object of our work is to design an intelligent hydrostatic bearing with magnetorheological elastomer sell bearing, to control the vibrations of rigid rotors during the passage of critical speeds, by the control of the damping and the rigidity of the bearings.

The bearings used in rotating machines (turbines, centrifugal pumps) generally comprise bearings whose main function is to ensure proper operating and to better control the vibration of the bearing Fig. 1, as well as the physical model supported by two bearings is represented by Fig. 2. 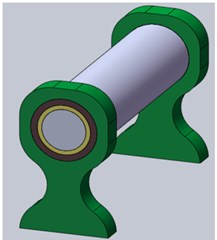 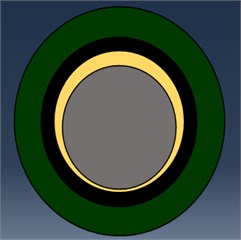 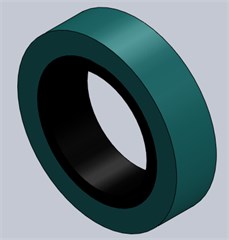 3.1. Modeling of the rotor behavior

The shaft is modeled by a rotating Timoshenko beam. The general formulation of the kinetic [27] and the deformation energies of the shaft integrating these formulas on the length of the shaft, it comes:

The deformation energy of a rotating Timoshenko beam [17] is equal to:

where is the correction factor for shear stiffness.

3.2. Modeling the behavior of the shell bearing

The damped vibratory movement of the MRE shell bearing is modeled by the system given in Fig. 3. 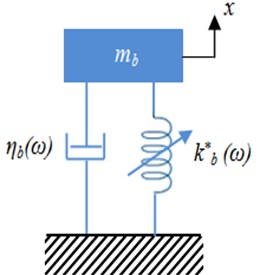 The equation of movement of the MRE shell bearing of Fig. 3 is given from the second law of motion, , in which is equivalent to the sum of the restoring force and the damping force . In this last expression, represents a positive damping which is adjustable by the application of a magnetic field. So, we get:

The solution of this differential equation corresponds to:

In the case of a magnetorheological elastomer, the complex rigidity is given by:

It is also possible to define a complex viscosity as follows:

where and are associated with the loss modulus and the conservation modulus respectively.

3.3. Modeling of the magnetorheological elastomer

The Maxwell model can accurately describe creep behavior in magnetorheological elastomer with small displacements. This model represents a viscoelastic material with several parallel branches such as a spring and a dashpot in parallel and is particularly accurate in predicting creep behavior.

Prony series parameters , , and were needed to characterize the creep displacement behavior in Abaqus. Shear and bulk moduli were then calculated using these parameters (Keenan) in order to compute the analytical solution:

4. Elaboration and experimental analysis of MRE

The rheological parameters of the MRE shell bearing as a function of the magnetic field are determined experimentally using the MetraviB DMA + 450 viscoanalyser Fig. 4(b) (PMC Laboratory, Nice, France). The elastomer is prepared (Fig. 4(a)) by the following steps:

Mixing the silicone oil and the RTV141A polymer in a bowl and proceed with a manual mixing during 10 min to obtain an elastomer gel with good homogenization. A second bowl containing a quantity of iron particles of micrometric size to loading the elastomer is prepared. 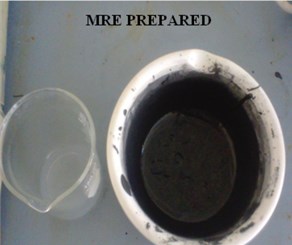 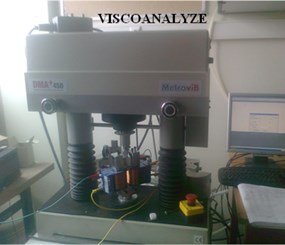 A quantity of this gel obtained by silicone and RTV141A is mixed during 30 min with a quantity of iron particles until obtaining a homogeneous paw. By this process, an elastomer loaded with 30 % of ferromagnetic particles is elaborated.

The degassing of the obtained paw under vacuum during 10 min to eliminate air bubbles in filtrated during the mixing is performed in order to have a healthy structure for the experimentation. The obtained elastomer is hermetically pre- served at low temperature.

The specimen has a rectangular shape of 30 mm of length, 28 mm of width, and 2 mm of thickness and loaded with 40 % of ferromagnetic particles of its total volume. The values of the storage and loss modulus obtained with and without the magnetic field are given in Table 1 [28].

To deal with the problem of reducing the amplitude of vibrations by the MRE shell bearing and the housing, we used a multi-body equivalent model in the Abaqus software (Fig. 5(a), (b)). The results of the meshing give 2476 elements for the shell bearing and 4805 for the housing.

Fig. 5. Finite elements model of a bearing: a) without mesh, b) with mesh 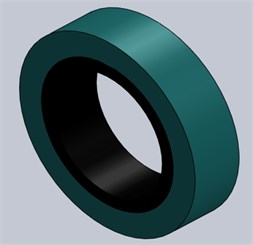 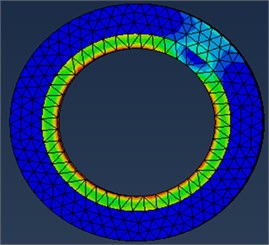 The geometric and mechanical parameters of the studied bearing are given in Table 2.

Table 2. Geometric and mechanical parameters of the bearing

An implicit model using the Abaqus software is taken up using the six-branch Maxwell generalized rheological model and the Prony series to analyze the influence of the MRE shell bearing on the rotor vibratory behavior. After recalling the main mechanical and rheological characteristics of the different parts, a complete modeling of the bearing and housing by the finite element method using the Abaqus software which allow meshing each of the two parts by C3D10 parabolic tetrahedron elements to ensure the convergence Fig. 5. Nevertheless, the representation of the viscoelastic core by volume elements is intended to take into account the shear responsible for damping in this layer. The numerical results found of the various parameters as a function of the intensity of the magnetic field are given by the Table 3.

Table 3. The numerical results found of the different parameters according to the intensity of the current

The displacement response corresponding to the first five vibration modes of the MRE shell bearing at 27°C and under a harmonic stress is shown in Fig. 6 as a function of different values of the current intensity. It is found that the amplitude is maximum and reaches critical values in the modes 1, 3 and 5. A low amplitude for modes 2 and 4. This observation is clearly shown in Fig. 7; the amplitude reaches critical values for odd modes and low amplitudes for even modes.

Fig. 6. Variation of the amplitude as a function of the current intensity 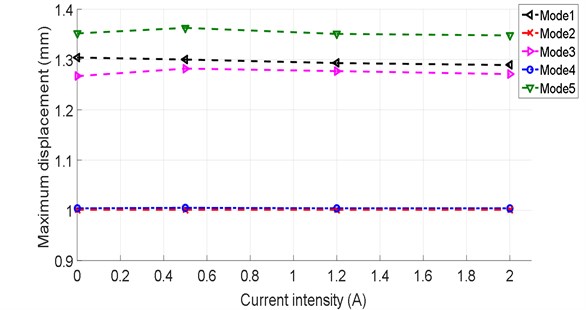 Fig. 7. Modes and frequencies of vibration according to the current intensity 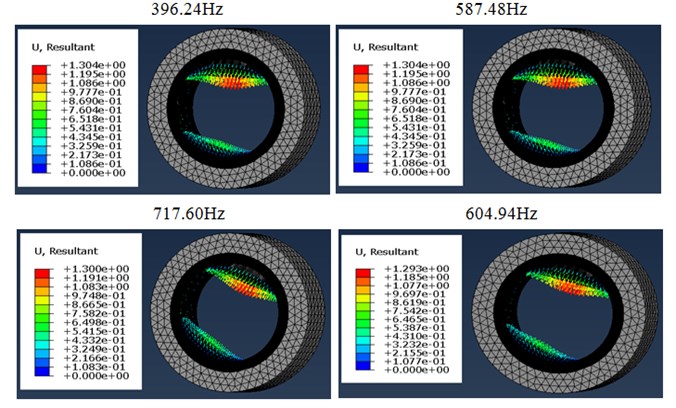 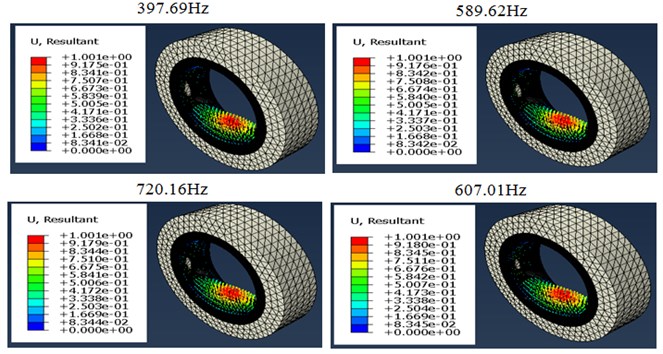 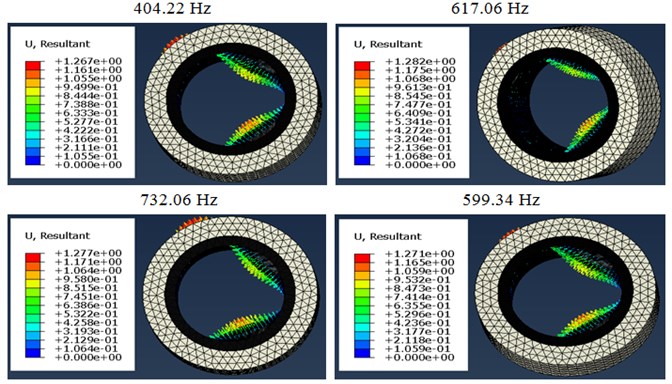 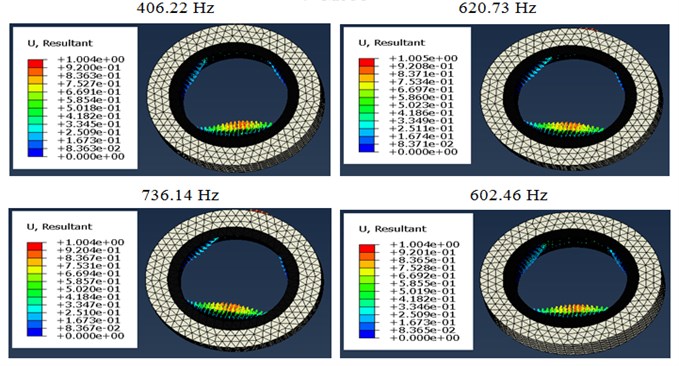 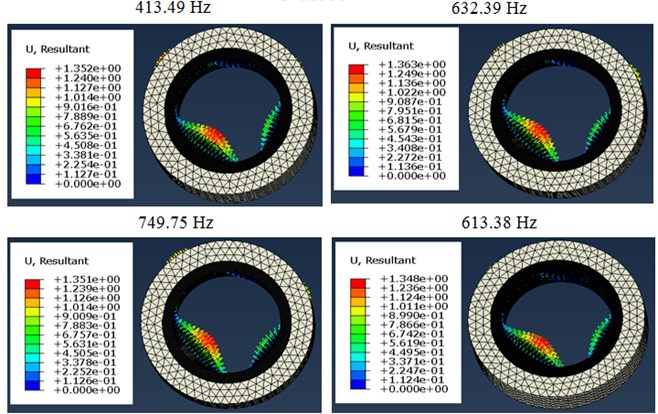 Fig. 8. Variation of the damping rate according to the current intensity 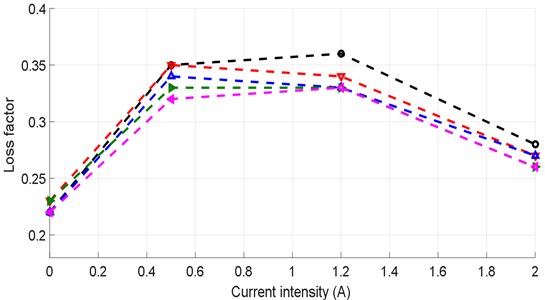 The results of the identification of the mechanical behavior (Table 4) of the shell bearing as a function of the magnetic field intensity are presented in Fig. 9. It appears that the increase in the magnetic field intensity makes it possible to appreciably increase the stress and the deformation. We have found that in the presence of a magnetic field, the attractive force between the iron particles increases which gives a greater sliding movement, these two phenomena are the basis of increase of the stress and the deformation simultaneously.

Table 4. Variation of the stresses vs. strain under different magnetic field intensities

Fig. 9. Variation of the stress developed within the shell bearing according to the strain 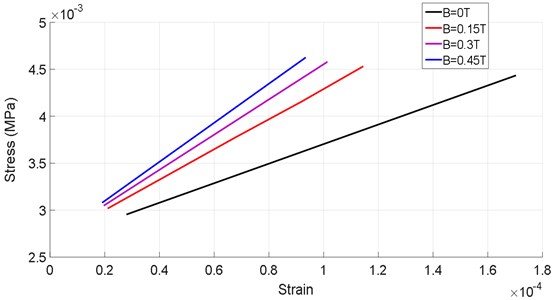 Table 5. Variation of the displacements vs to the strain under different the intensity of the magnetic field

Fig. 10. Variation of the stress developed within the shell bearing according to the displacement of the rotor 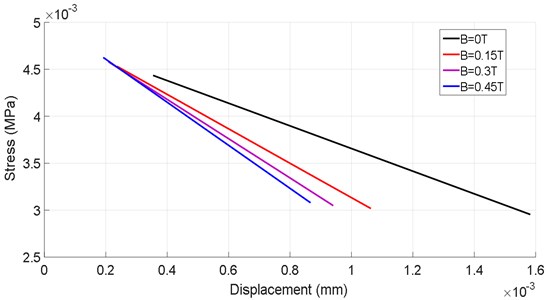 In this work, a new hydrostatic bearing with magnetorheological elastomer shell bearing has been designed to control the undesirable vibrations of rigid rotors.

This system of active vibration control of rigid rotors using magnetorheological elastomer bearings has aroused great interest for engineers and researchers because it combines the advantages of active-passive control, and it does not need great external energy, it responded even with low electrical intensity.

The Maxwell model is used to better describe the rheological behavior of the magnetorheological elastomer using the Abaqus software. This model is based on experimental data. This model of MRE damper has been applied to a simplified system with one degree of freedom with complex rigidity. However, this model allowed us to realize numerically a system of active control of rotor vibrations. The results of the numerical simulation can be summarized as follows:

Thanks to Laboratory of Condensed Matter Physics (LPMC) University of Nice – Sophia Antipolis – France, for providing various supports for this study. We are also grateful to Messrs George Bossis Research Director Emeritus and Dr. Kuzhir Pavel of LPMC, for their help.