Copyright © 2018 JVE International Ltd. This is an open access article distributed under the Creative Commons Attribution License, which permits unrestricted use, distribution, and reproduction in any medium, provided the original work is properly cited.

In order to overcome the problem of “singular points”, a method has been developed for the kinematically accurate separation of a large rotation into an axial Euler vector and a transverse Euler vector. The proposal is based on the fact that in the problems of the rotor dynamics of machines consisting of shafts, gears, bearings, etc., the transverse rotation never reaches a value of 2 (a critical value for the Euler vector). The axial rotation is not limited in any way. A numerical dynamics example illustrating the method is presented. The result of the dynamics problem is checked by observing the law of conservation of total energy.

In the problems of rotor dynamics of machines, which consist of shafts, gears, bearings and other rotating elements, in most cases the rotation along one of the directions (axial) is much greater than the rotations of the other two directions (transverse).

To describe the large rotations in geometry, physics and mechanics, a dozen methods are used [1-3]. The disadvantage of all methods of describing large rotations using 3 kinematic parameters (Euler angles, Cardan angles, rotation vectors) is the presence of singular points. The problem is that matrices or tensors connecting angular velocities with derivatives of kinematic parameters become degenerate when a certain critical value is reached by rotation.

The purpose of this article is to develop a different method for describing large rotations, taking into account the specific problems of the rotor dynamics of machines consisting of shafts, gears, bearings and other rotating elements. The main idea is to divide the general rotation of some assembly (shaft section, bearing ring, gear, etc.) into a rotation around the rotor axis and a transverse rotation. In most cases, for the listed rotating parts, the transverse rotation is limited by some not very large values. For example, even for spherical bearings, the relative transverse rotation of the rings cannot reach the value of /2.

The most effective and simple way to describe large rotations in the opinion of the authors is to describe it with the help of the Euler vector [4-8]. The vector description of the rotations is based on Euler’s theorem that an arbitrary combination of spatial rotations is equivalent to one plane rotation. The Euler vector just sets this plane rotation. Its direction indicates the axis of rotation, and the length is equal to the angle of rotation (Fig. 1).

The following tensor functions of the vector argument are connected with the Euler vector:

3. Description of large rotations with a combination of axial and transverse Euler vectors

As shown in the introduction, the specific features of the rotor dynamics of machines consisting of shafts, gears, bearings and other rotating elements are the limitation of the transverse rotation. In this connection, it is not necessary to use the Euler vector for a total rotation, since the norm of this vector is limited to 2, and thousands of rotations must be described. The vector of Euler is enough to describe the transverse rotation. Then, for the rotation around a fixed longitudinal axis, the usual rules of kinematics of plane motion from theoretical mechanics will operate. Therefore, it is convenient to represent the total rotation with the Euler vector as a combination of two successive rotations – the first rotation around the axis of the rotor by an angle , the second rotation around an axis perpendicular to the axis of the rotor with the Euler vector (Fig. 2).

Fig. 2. A combination of axial and transverse Euler vectors

The rotation tensors differentiate according to the following formulas:

From Eqs. (1) and (2), as shown in [4], when two successive rotations are imposed, the rule of combining angular velocities follows:

Since the first rotation is a plane rotation, the elementary formula of the kinematics of plane motion is valid for it:

For the second rotation, according to (1), the angular velocity is found using the Zhilin tensor:

Substituting (3) into (5) with regard to (4) allows us to express the derivative of the Euler vector using angular velocities:

Projecting the relation (6) to the axis of the rotor, taking into the orthogonality condition for the vectors and , leads to the identity:

From (7) the expression in terms of the total angular velocity shows:

Expressions (4) and (6), with supplementary Eq. (8), are the required differential equations of kinematics of rotational motion represented by the composition of two rotations and .

As an example, let us consider the dynamics problem for a rotor fixed in a block of springs. The schematic diagram is shown in Fig. 3.

Fig. 3. The position of the rotor at the initial time

The numerical calculation was carried out for the following initial data:

• The distance from the mass-center to the center of the block of springs 0.75 m;

Fig. 4 shows the forces and moments acting on the rotor in the process of motion. The block of springs creates a force at point , directed opposite to the radius vector of point , and a moment directed opposite to vector . In addition to the reactions of the springs, the gravity force , applied at the center of gravity of the disk (point ), acts on the rotor.

Fig. 4. The forces and moments acting on the rotor during the motion

The dynamics of the rotor is described by the following system of differential equations:

When the system (9) was compiled, the kinematic relations (4), (6), (8) were used. The remaining equations are obtained from the usual equations of kinematics and rigid body dynamics.

For numerical integration, the traditional fourth-order Runge-Kutta method with automatic step selection was used. The results of the calculation in form of trajectory of mass center are shown in Fig. 5.

Except for the motion of the mass-center of the rotor, we are also interested in the change of the axial angular velocity , which in the problems of rotor dynamics is usually assumed to be constant. The deviation of from the initial angular velocity is shown in Fig. 6.

From Fig. 6 it shows that the axial angular velocity varies with time, but the deviation is very small (the greatest relative deviation does not exceed 0.1 %).

The result of the dynamics problem is checked by observing the law of conservation of total energy. The dependence of the combinations of energies on time is shown in Fig. 7.

Fig. 5. The trajectory of mass-center 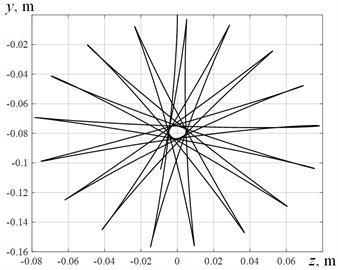 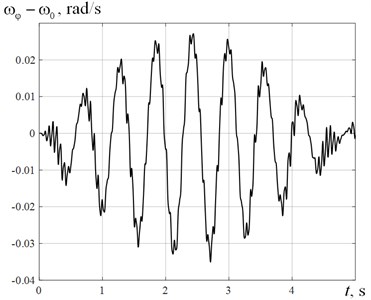 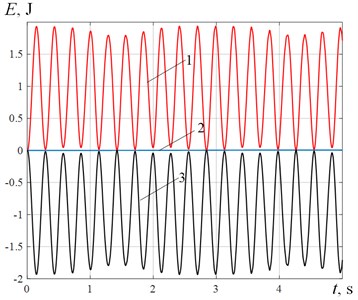 The total energy is stored with high accuracy. This accuracy confirms not only the absence of errors in the presented equations, but also the absence of numerical problems when using the proposed method of dividing the rotation into axial and transverse.