Copyright © 2019 Ping Wang, et al. This is an open access article distributed under the Creative Commons Attribution License, which permits unrestricted use, distribution, and reproduction in any medium, provided the original work is properly cited. 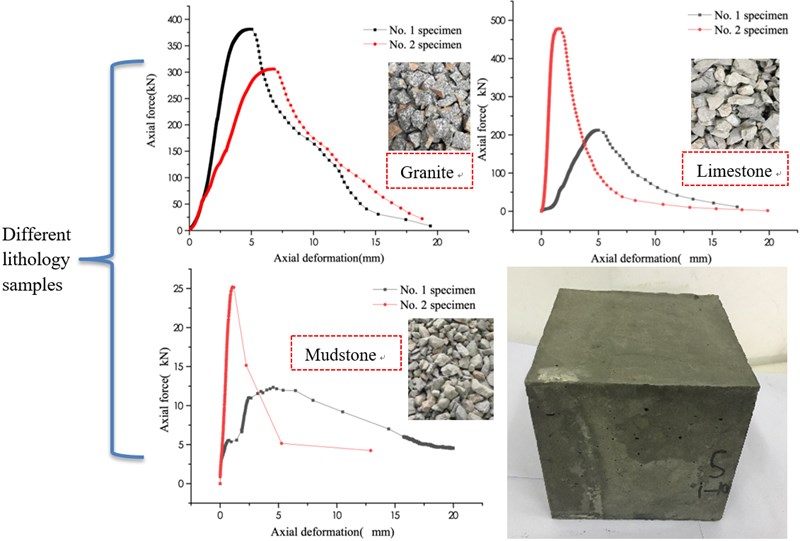 Both grouting and shotcreting can improve the mechanical properties of broken rock [14]. Ding et al. [15] found that deformation modulus, friction coefficient and rock mass strength of weakly weathered rock mass had been improved after grouting, but the cohesion had not been obviously improved. Zhao et al. [16, 17] found that the residual strength of grouting consolidation body had been greatly improved, and the deformation of rock mass had tended to be synergistic after grouting. Zhang et al. [18] compared and analyzed the mechanical characteristics of grouting body and grouting anchor body after rock sample rupture, and found that grouting cementation could have greatly improved the bearing strength of broken rock sample, but there had been no residual strength in grouting rock mass. The grouting body had obvious residual strength after anchoring. Jenifer J. Day [19] and Salimian et al. [20] studied the effects of grouting on the shear properties of rock mass fissures, rock structural planes and hard rock joints, and considered that grouting could have significantly improved the mechanical properties of structural planes. Wangxi Zhang [21] thinks that the higher the strength of rock sample and the bond strength of slurry are, the higher the strength of post-peak specimen strengthened by grouting is. Under the condition of rich water, Jinfeng Zou [22] and Guojun Wu [23] found that the slurry can activate the rock surface component to form new rock-like minerals, and the grouting effect is related to the degree of rock sample fragmentation, the density of rock sample and the bearing capacity of rock sample. Fangtian Wang [24] thinks that the strength of grouting consolidation body is affected by confining pressure, and with the increase of confining pressure, the effect of grouting reinforcement is more remarkable. Based on the statistics of the existing growth rate of grouting and solid strength of broken rock mass, R. Pan et al. [25, 26] deduced the empirical formula and made the growth theory of grouting and solid strength estimation for broken rock mass. In addition, Qingsong Zhang [5] analyzed the mechanism of grouting with the change of grouting viscosity with space, and Xing Huang [27], Deyu Qian [28] analyzed the mechanism and effect of grouting on ground surface in the broken zone.

In summary, grouting after rock mass rupture can effectively improve the strength and stiffness of the broken surrounding rock, so that the broken surrounding rock can be reshaped and can obtain the secondary bearing capacity [29, 30]. However, in the actual project, after the surrounding rock is supported by grouting or shotcreting, most of the rock mass is not fully cemented. These insufficiently cemented rock masses are between the free surface and the relatively stable inner surrounding rock. The mechanical mechanism of deformation after loading and its stress transfer mechanism are very important for the stability of the surrounding rock for the whole project. Therefore, in this paper, the cement slurry is used to incompletely bond the broken rock mass under different conditions, and the mechanical properties of such insufficiently cemented broken rock mass are discussed by the uniaxial compression test.

(1) Specimen materials: Three kinds of broken rock samples of mudstone, limestone and granite are used as cemented rock samples. The cementing medium is made of PSB32.5 Portland cement. Considering the fluidity and strength factors, the water-cement ratio of the specimen is determined to be 0.4. The mechanical parameters measured by the pure cement slurry are shown in Table 1.

(4) Loading and monitoring device: The RMT-150 rock mechanics test system is used for loading. In order to ensure uniform force on the cube test piece, a steel bearing plate of 200×200×30 mm was placed on the upper and lower ends of the test piece, and a little butter was evenly applied over the surface. High (force)-stroke loading, and force control mode were accepted, and the loading rate was 0.5 kN/s. The loading process was taken with a high-definition camera, and the thermal response of the test piece during loading was monitored by means of a FLIRSC325 infrared thermal imager.

(3) After repeating this 3 times, remove the retaining ring and fill all the remaining 15 mm space with the cement slurry, let the cement slurry naturally soak the entire test piece, and finally smooth the upper surface.

(4) Let the prepared specimens be cured, then number, and spare them. The broken rock sample and the fabricated test piece are shown in Fig. 1.

The uniaxial loading of the weakly cemented specimen of each test group until the test head is automatically retracted is shown in Fig. 2. 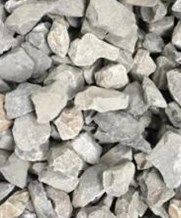 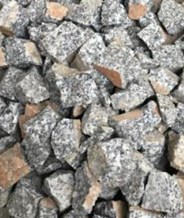 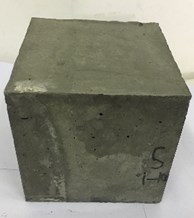 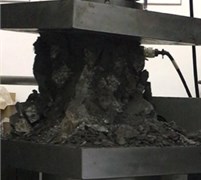 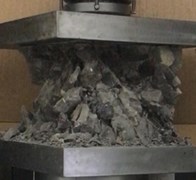 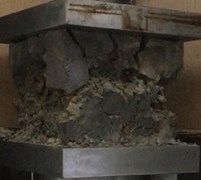 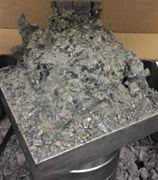 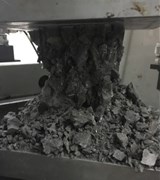 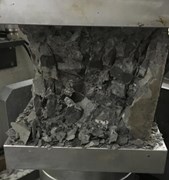 Under the condition of uniaxial loading, the variation of the secondary bearing capacity of the weakly cemented broken rock specimens of different lithology test groups is shown in Fig. 3. 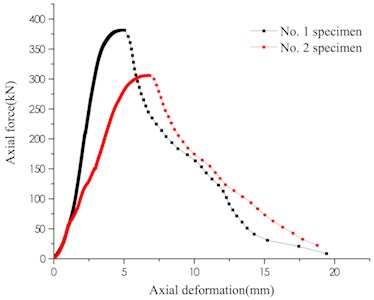 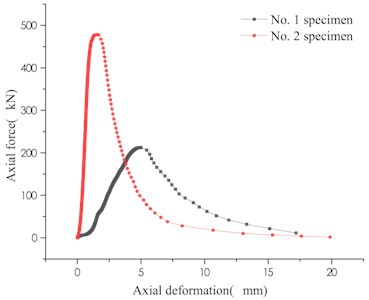 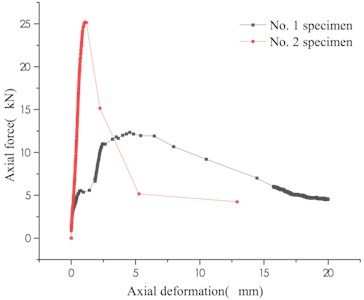 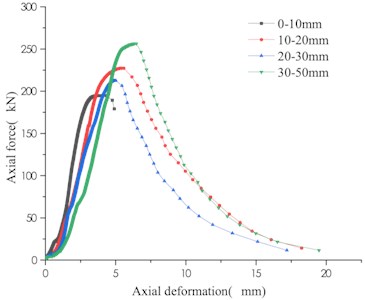 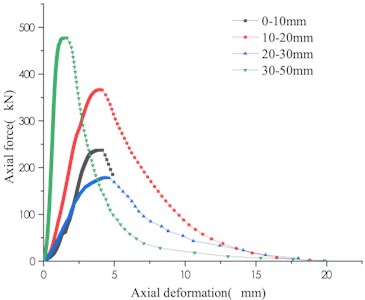 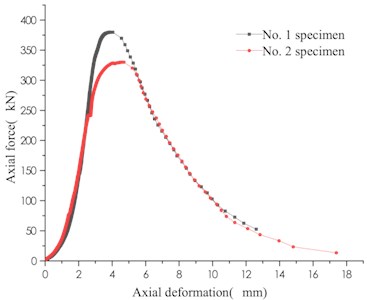 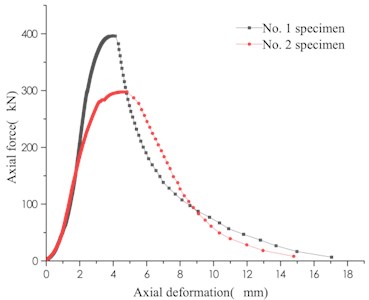 The two grading schemes are mainly medium-sized (20-30 mm), with mass ratios of 50 % and 60 %, respectively. In Scheme 1, the mass ratio of small particle size (0-10 mm) is 20 %, and the large particle size (50-30 mm) accounts for 30 %. In Scheme 2, both the small particle size and large particle size account for 20 %. It can be seen that the variation of the secondary bearing capacity of the weakly bonded specimen after grading is basically the same, and the bearing capacity values are between the medium-sized particle size group and the large-size group. Due to the discontinuity of the internal medium, the degree of cementation of weakly cemented specimens is affected by many factors, and the value of secondary bearing capacity is highly discrete. The definition of the discrete coefficient in statistics is:

where is a discrete coefficient; is a statistic for each group; is each statistic; is the average value of each group of data.

There are two conditions for the formation of a force chain network. First, the adhesion between particles is weak, and secondly, a constraint is available. The weakly cemented rock body itself has a weak degree of cementation. At the same time, a certain thickness of cement slurry is bound on the surface of the broken rock mass, which can basically meet the conditions for forming the force chain bearing. Under the constraint conditions, the bearing capacity of the broken rock mass mainly depends on the compression strength of the rock mass on the force chain network, the friction strength between the rock blocks and the confinement constraint strength.

Under the condition of strong confinement constraint, the crushed rock sample will be crushed against the core and eccentricity [17]. However, under weak lateral conditions, the rock block does not necessarily undergo crushing damage. Due to the irregularity of the rock block, the contact form and the contact area are different during the loading process. The compressive strength of the rock mass in the force chain network can only be obtained based on the statistical theory [33]:

where is the rock mass strength in the statistical sense; is the apparent damage strength of the particle size of particles, which can be measured by experiments; is the fractal dimension of the rock block, the value range is 2.0-3.0; is the number of rock blocks. 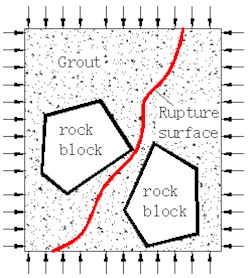 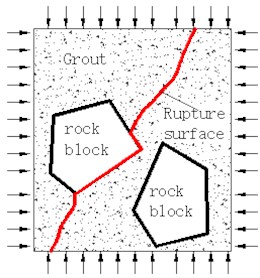 The weakly cemented specimens of the broken rock samples are discontinuous inside, and the compression failure process includes two forms of bond failure and friction failure, which are accompanied by changes in the heat of the test piece. Therefore, the heat change and the overall damage process during loading the test piece are monitored by FLIRSC325 Infrared Thermal Imager, and the results are shown in Fig. 8.

Fig. 8. The change of seed heat during the failure process 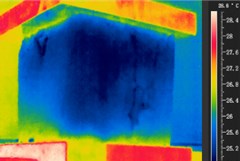 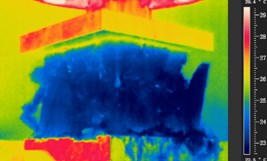 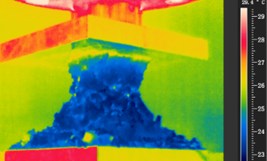 The heat mode of the test piece is not changed significantly before the cement slurry wrap is destroyed. After the cement slurry wraps off, multiple “hot spots” appear on the rock pillar during the formation of the core rock pillar. These “hot spots” are the heat generated by the friction between the blocks. It can be inferred that before the surface constraint fails, the cement-bonding-constraining effect of the cement slurry in the weakly cemented broken rock specimens, the frictional displacement between the rock masses is less, and a stable bearing structure with better integrity can be formed (force chain network). After the surface constraint fails, the load-bearing structure in the specimen is broken, and the secondary bearing capacity after the failure is provided by the frictional strength between the rock blocks in the residual core rock column. During the load-bearing process, due to frictional displacement, heat is generated, and multiple “hot spots” are formed on the core rock pillar. Therefore, the overall failure process of the weakly cemented broken rock specimen can be summarized into two stages: the secondary load-bearing stage and the residual secondary load-bearing stage of the broken rock mass.

4) The bonding-constraining effect of cement paste is the main mechanism for the cementation regeneration of the broken rock mass. In the main stage of the secondary bearing of the weakly cemented rock mass, the common bearing capacity of the force chain network and the surface cement slurry wrap box-type bearing structure under the weak lateral constraint is the main bearing mechanism. In the residual secondary load-bearing stage, the squeeze friction between the weakly cemented broken rock mass in the core rock column is the main mechanism of secondary bearing.

This work was supported by the National Natural Science Foundation of China (Grant Nos. 51804114, 51774130, 51974117), the project funded by the Research Fund of State and Local Joint Engineering Laboratory for Gas Drainage & Ground Control of Deep Mines (Henan Polytechnic University) (SJF201806), funded by the Open Research Fund Program of Work Safety Key Lab on Prevention and Control of Gas and Roof Disasters for Southern Coal Mines, Hunan University of Science and Technology (E21828), and funded supported by the Postdoctoral Research Foundation of Hunan University of Science and Technology (E61803).