Particle stratification of a vibrating screen with translation-swing composite motion

Copyright © 2020 Guolang Shen, et al. This is an open access article distributed under the Creative Commons Attribution License, which permits unrestricted use, distribution, and reproduction in any medium, provided the original work is properly cited. 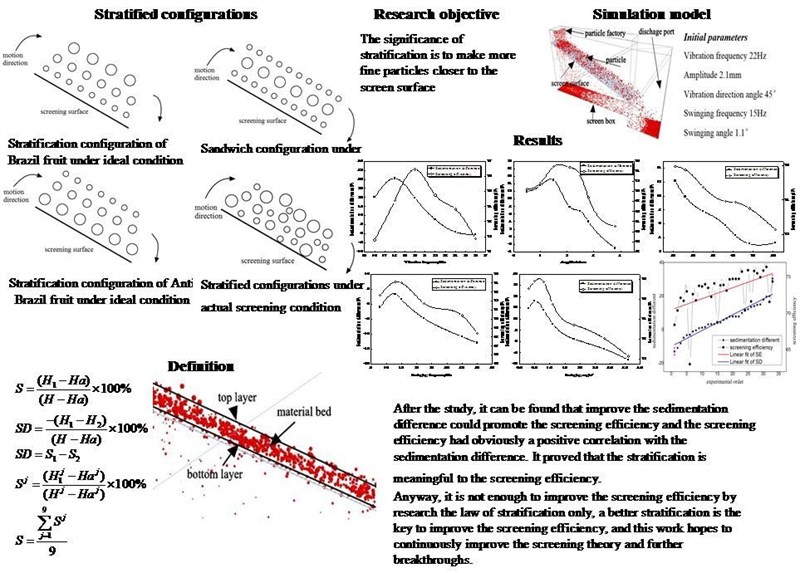 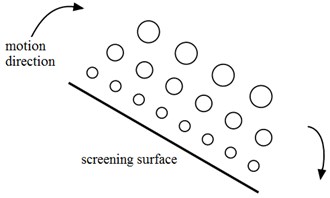 a) Stratification configuration of Brazil fruit under ideal condition 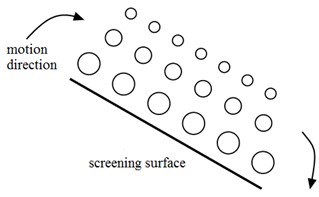 b) Stratification configuration of Anti Brazil fruit under ideal condition 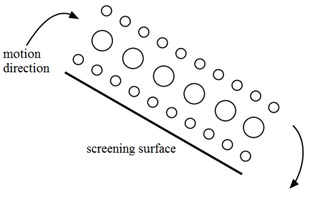 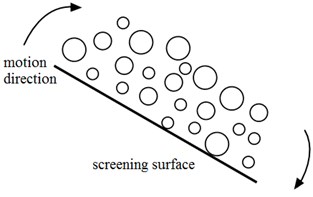 Fig. 2. Section of the material bed 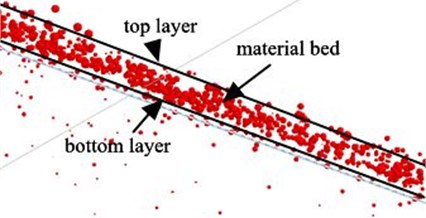 In the material bed, the stratification sedimentation coefficient is defined as the ratio of the mean distance between fine particles under relative separated particle size and all particles from themselves to the bottom layer of material bed on the screen. According to experience, the 0.7 times of aperture size often been used as relative separated particle sizes to calculate the screening efficiency, and there is high screening efficiency when it is used for dealing with difficult-to-screen material. Stratification sedimentation coefficient is given by Eq. (1):

In order to facilitate statistics, the sedimentation difference is also using Eq. (3):

In the software of DEM, the position and quality information of each particle can be obtained in the three-dimensional coordinate system, then calculated the height of each particle from the screen surface by using the following formulas:

Fig. 3. The height of particle to screen surface 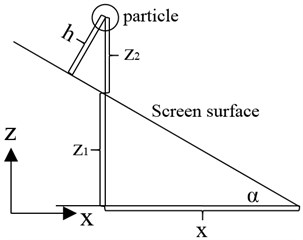 We can use Eq. (8) and Eq. (9) to calculate the stratification sedimentation coefficient of the coarse particles and fine particles. Finally, SD can be obtained by subtraction with the Eq. (3):

2.2. The discrete element method used in the simulation

In recent years, the discrete element method (DEM) has been used to model the motion and effect of a large number of particles. Many scholars have achieved great success by using the DEM to study the vibrating screen. P. W. Cleary [11-13] has made a great contribution to the development of the vibrating screen, he applied the DEM to model and affect a large number of small particles to capture the spherical particle separation on an inclined flat screen, he has proved that the DEM has a good efficacy to simulate the motion of particles on the sieving machinery. Tong [14, 15] has built the 3D model of vibrating screen, then used the model analyzed the screening efficiency and screening process in different parameters with a different pattern of vibration. So the data difficult to obtain in the actual sieving process can be obtained by using the simulation based on the discrete element method.

A 3D model was set up to simulate particle flow on a vibrated inclined screen, the initial parameters were shown in Fig. 4, and the angle of screen inclination is 21 degrees, screen box is 160 mm long, 30.5 mm wide and 80 mm high. Combined with the size distribution of sands used in the industry, mixture of two different size particles is employed which consists of a bimodal normal distribution with individually mean diameters of 0.5 and 1.0 mm and uniformly standard deviation of 0.55 in the paper. The total number of particles is 10000 in every simulation, and particles generate rate is 16666 particles/s. Other conditions and parameters are listed in Table 1 and Table 2.

As a criterion for evaluating screening efficiency (), is described as:

The relationship between screening efficiency and sedimentation different was systematically analyzed by the comprehensive methods of intuitive analysis and mathematical statistics analysis.

The method of comparing the relationship between screening efficiency and sedimentation different by their graphs is called intuitive analysis. Their trends can be analyzed intuitively by this method. 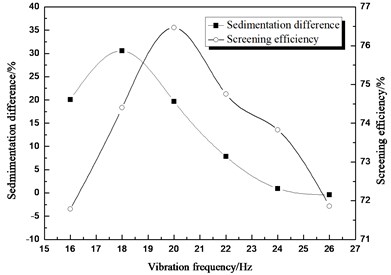 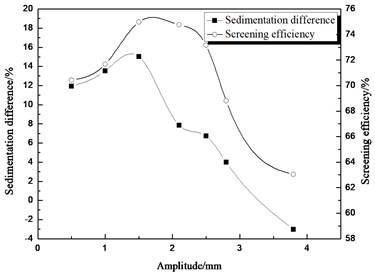 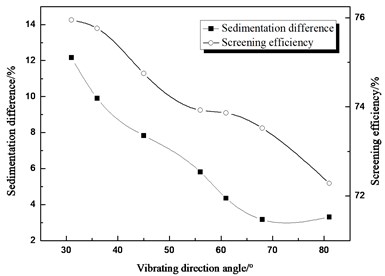 Fig. 8. Comparison between sedimentation difference and screening efficiency about the different swinging frequency 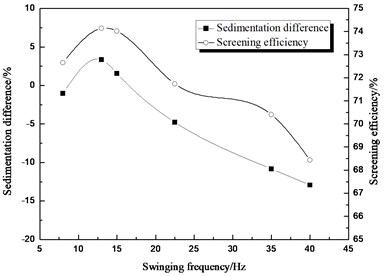 Fig. 9. Comparison between sedimentation difference and screening efficiency about the different swinging angle 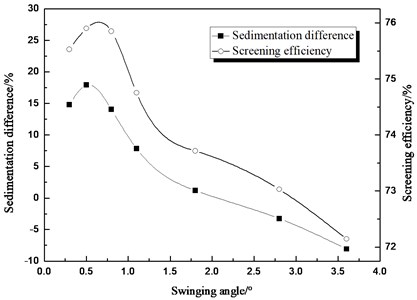 Using the correlation coefficients to describe the linear dependence of screening efficiency and sedimentation different should better reflect their relationship.

Since and are always directly correlated to themselves, the diagonal entries are just 1, that is: 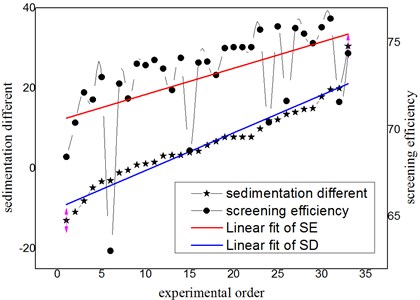 From this work, we can get the following conclusion: