Copyright © 2019 Biao Xiao, et al. This is an open access article distributed under the Creative Commons Attribution License, which permits unrestricted use, distribution, and reproduction in any medium, provided the original work is properly cited.

As for the drive system, Zhang et al. [2] found the combination of the harmonics of electromagnetic torque and the rolling force induced the hot strip rolling mill vibration. Shi et al. [3] analyzed the influences on amplitude frequency characteristics of super-harmonic resonance, sub-harmonic resonance, and combination resonance under the variation of torque disturbance. Lin et al. [4] found the torsional vibration of the drive system effected the vibration characteristic of the work rolls. Yan et al. [5] conducted ANSYS finite element harmonic response analysis module to study the drive system, and found that the torsional vibration and axial vibration produced the phenomenon of coupled vibration under certain conditions. Shi et al. [6] established a dynamic model of multi-degree-of-freedom main drive system, by analyzing the model, found that the torque disturbance was one of the main factors resulted the vibration.

As for the screw-down system, Liu et al. [7] established a rolling mill model under non-linear constraint of the hydraulic screw-down cylinder, and studied the behavior characteristic of the rolls under the action of segment elastic force and friction force. Wang et al [8] found the hydraulic servo position system of the rolling mill drive side and operate side was inconsistent, which could result in position asynchrony of both sides, and proposed an active disturbance rejection synchronous control to improve anti-jamming capability. Jin et al. [9] studied the relationship between the dynamic stiffness of the displacement feedback mechanism of the rolling mill screw-down system and the vertical vibration of the mill, and analyzed the system vibration characteristics and step response property with dynamic stiffness parameter variation.

All the above researches have made great contributions to rolling mill vibration. However, few of them considered the effect of the combination excitation, and no relevant literature studied the combination excitation of the screw-down system and the strip. In fact, the effects of the screw-down system and the strip on the rolling mill are interrelated, which is proved by field test and experiments in Section 2 of this paper. In Section 3, we propose a vibration dynamic model of the cold strip rolling mill under screw-down-strip system, and obtain the response frequency characteristics. In Section 4, a vibration suppression method is introduced and good effect is obtained.

In order to obtain the vibration phenomena, the vertical vibration of the upper backup roll bearing seat of F1 stand was measured by using an electromagnetic vibration speed sensor. The parameters of the sensor are shown in Table 2.

And the parameters of the data collector are shown in Table 3. Set the sampling frequency to 1024 Hz.

The test instrument and the test site are shown in Fig. 1.

Table 2. Parameters of the sensor

Table 3. Parameters of the data collector 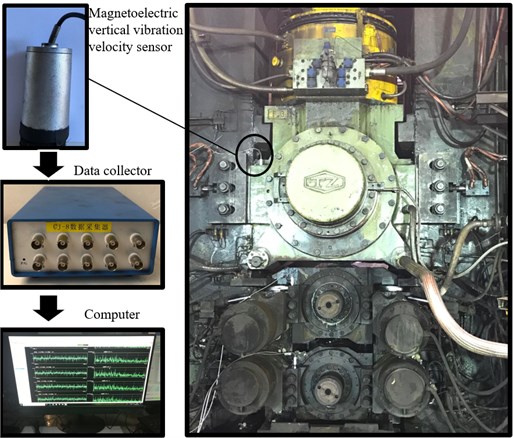 After the field test, we conclude that when the 1720 hot strip mill rolls 2.0 mm thick strip, F1 stand vibrate violently with the frequency of 62 Hz, and the amplitude of the vibration RMS is large.

The strip thickness deviation and the hydraulic fluctuation of the srewdown system frequently induce rolling mill vibration, which are a significant object for scholars to study. The chatter marks on the strip result the thickness deviation with different frequencies at varied rolling speeds. Fig. 3 shows the chatter marks at the entry of F1 stand.

Fig. 3. Stripes on the surface of the steel strip 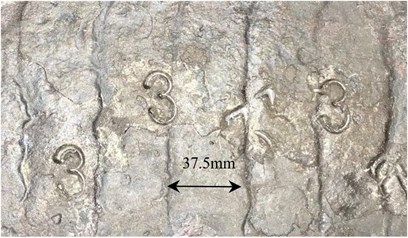 a) Spectra of the strip thickness deviation of F1 entrance 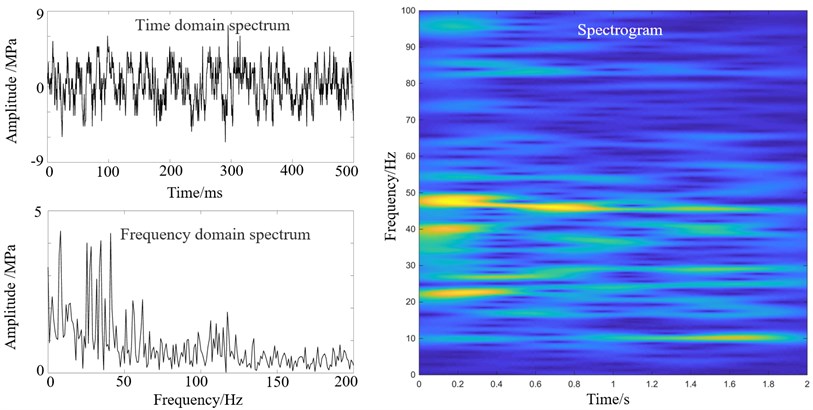 In Fig. 3, we can see remarkable chatter marks on the steel strip with the width of 37.5 mm.

The experiment of stripless rolling was introduced to simulate the rolling without strip, the parameters of Table 1, except the roll gap, was applied in the experiment. The vibration spectra of the backup roll are shown in Fig. 5.

Fig. 5 shows that the frequency is dispersed with minor amplitude, and no violent vibration occurs, so we conclude that the vibration of rolling mill is related to the strip. 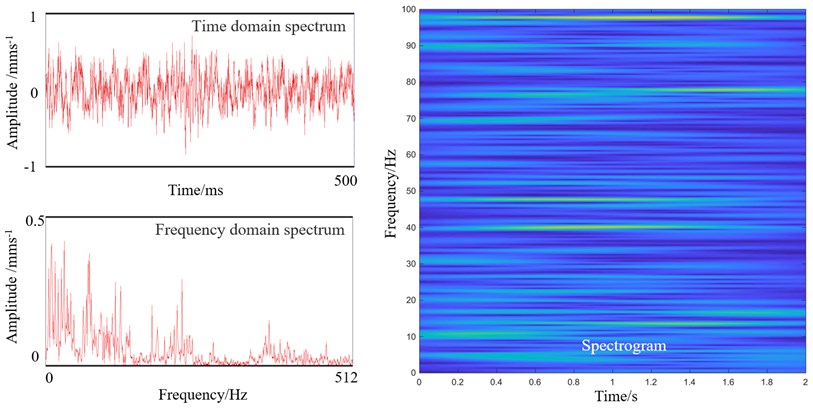 3. The natural characteristic of the rolling mill

In order to obtain the natural characteristics of the rolling mill, the model of F1 stand of the hot strip mill is modeled and the modal is obtained by ANSYS, which are shown in Table 4. 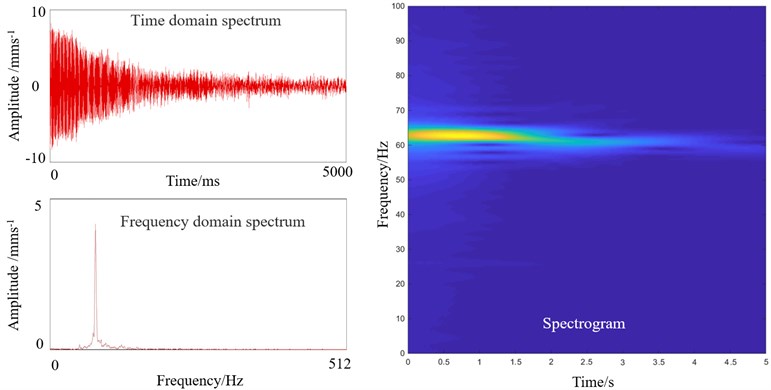 Table 4. The modal of rolling mill

Its typical fourth-order natural modal is shown in Fig. 7.

From Fig. 7 we can see that the upper half of the rack and the rolls vibrate more violently and the modal frequency is 61.955 Hz which is similar to the result of the field test in Fig. 2. 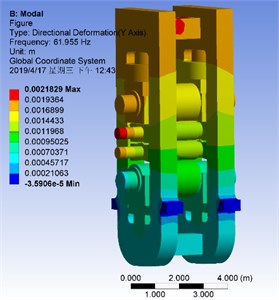 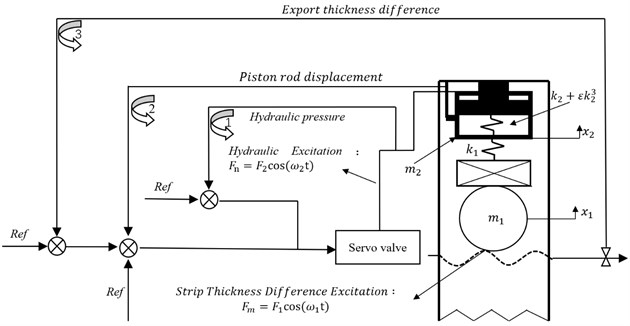 If Eq. (11) holds for any condition, the coefficients of the same power of parameter on both sides must be equal. Thus, a set of linear differential equations with approximate solutions of each order is derived. The equations of the first three orders (, and ) are shown as follow:

The superscript of denotes the fourth derivative and is the coefficient of each cosine component. The solution of Eq. (18) is shown as follow:

here - is the coefficient of each cosine component.

The above theoretical analysis shows that the rolling mill generates multiple response frequencies under combined excitation of two frequencies. Simulink is introduced to obtain the response frequencies with three and four excitation frequencies. The responses and in Eqs. (12) and (13) are obtained with the state space module. Then substitute them to Eq. (20) to obtain (the displacement of the AGC cylinder). Eq. (12) is transformed into a state equation, and the state variables are shown as follow:

The matrix and vector are denoted with bold front. The derivative of Eq. (23) is shown as follow:

The output equation, , is defined as:

And the excitation, , is expressed as:

The matrix form of the state equation is denoted as:

Eq. (13) is also converted to state equation with the same method. The simulation parameters are shown in Table 5.

The parameters selected in the state-space module in Simulink are A, B, C and D in Eq. (27), respectively. After substituting the parameters in Table 2. the simulation model of the rolling mill under combined excitation based on the perturbation method can be obtained, as shown in Fig. 9.

Fig. 9 shows the simulation model with three sinusoidal combined excitations. The vibration response of the model is shown in Fig. 10. 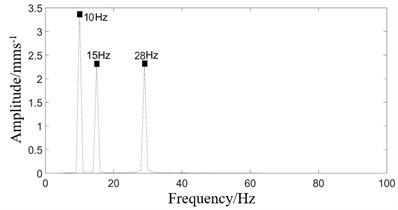 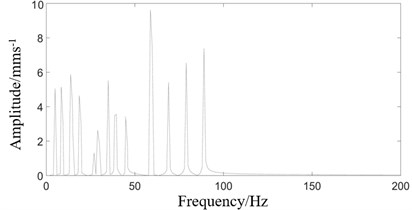 b) Response spectrum under three excitations 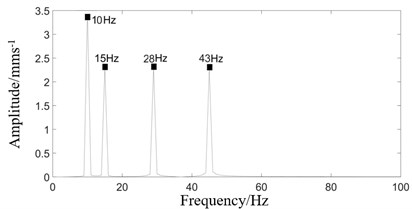 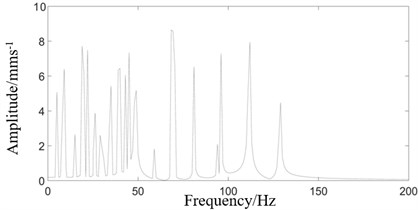 b) Response spectrum under Four excitations

According to the conclusion of the previous chapters, the idea of vibration suppression is introduced by reducing the number of output frequencies of the system. There are far more than two excitation frequencies in the rolling mill under actual working conditions. Generally, the roll gap position regulator receives multiple reference signals and feedback signals. Therefore, a filter is added to the AGC system control loop to filter the input current signal of the servo valve to reduce the frequencies of the oil pressure at the outlet of the servo valve, and a monitoring system is installed at the bearing seat of the upper backup roll. By gradually adjusting the filtering range and observing the vibration signal in the monitoring system until the vibration signal of the upper roll system is not approach to the natural frequency (62 Hz) of the mill, the optimum filtering range is obtained. The effects before and after filtering are shown in Fig. 12, where a)-d) are the spectra without filtering, followed by the thickness deviation on strip surface, the input current of servo valve, the oil pressure of servo valve outlet and vibration of bearing seat of backup roll on F1; while e)-h) is the corresponding spectra after filtering. The arrow in the spectrum f is the filtering frequency range, which is 20 Hz-30 Hz and 57 Hz-67 Hz, respectively. We can see that the number of frequencies of oil pressure at the outlet of servo valve decreases after filtering. When the combined frequencies of the screw down system and the strip steel acts on the system, no response frequency approach to the natural frequency of the rolling mill (62 Hz), so the mill does not vibrate violently. Fig. 13 shows the time dominant spectrum of d and h in Fig. 12.

Fig. 12. Vibration comparison of rolling mill before and after filtering

From Fig. 13 we can see that due to the absence of the dominant frequency of 62 Hz after filtering, the vibration RMS (Root Mean Square) decreased by 98.7 %, which indicated the proposed method achieves effective vibration suppression effect.

Fig. 13. Vibration RMS of rolling mill before and after filtering 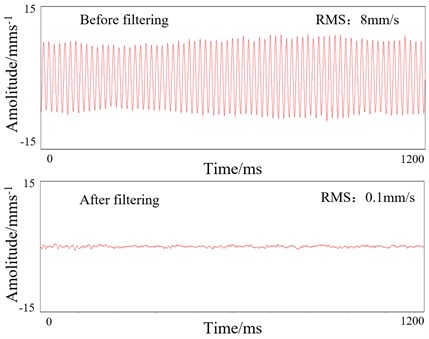 3) A filter is introduced in the AGC control loop to filter the input current signal of the servo valve to reduce the frequencies of the oil pressure at the outlet of the servo valve, and a monitoring system is installed at the bearing seat of the upper backup roll to verify the effect of filtering, and we find that when the filtering frequency ranges are set to 20 Hz-30 Hz and 57 Hz-67 Hz, the vibration of F1 stand is weak with no dominant frequency. Due to the absence of the dominant frequency of 62 Hz after filtering, the vibration RMS (Root Mean Square) decreased by 98.7 %.