Copyright © 2022 Tao Zhang, et al. This is an open access article distributed under the Creative Commons Attribution License, which permits unrestricted use, distribution, and reproduction in any medium, provided the original work is properly cited.

Aiming at the disadvantage that multi-scale entropy only analyzes the low-frequency components of time series, this paper proposes a rolling bearing fault feature extraction method based on hierarchical dispersion entropy (HDE). Firstly, the HDE is constructed based on the hierarchical operators and dispersion entropy. Secondly, the influence of HDE parameters on entropy stability is studied. Finally, the fault diagnosis method based on HDE, least square support vector machine is applied in rolling bearings. The experiment results show that the proposed method can distinguish different types of the rolling bearing faults. It owns the higher fault diagnosis accuracy than the traditional multi scale entropy methods, such as multi-scale sample entropy (MSE), multi-scale dispersion entropy (MDE).

This paper is organized as follows: Selection 2 proposes HDE. Section 3 studies parameters selection of HDE method. Section 4 analyzes the classification results of LSSVM [16] based on HDE as well as the comparison results with other methods. Finally, Section 5 concludes this research.

Based on the advantages of hierarchical entropy and the definition of dispersion entropy, HDE is proposed. The calculation process of HDE is presented as follows:

1) Given the time series , the hierarchical operator and is defined as:

When or , one can define the matrix operator as:

(2) Construct a dimension vector , then the integer can be expressed as , where the vector corresponding to a positive integer .

(3) Based on the vector , the node component of each layer decomposition of the time series is defined as:

and are the low-frequency and high-frequency parts of the original time series in the layer , respectively. In Fig. 1, the hierarchical decomposition on the scale 2 is illustrated in the form of hierarchical tree.

(4) The hierarchical component sequence is mapped to by the normal cumulative distribution function . locates in the interval .

(5) is assigned to the integer by the function . is the number of categories. is converted to the reconstruction sequence based on the embedding dimension and delay parameter :

(6) All possible discrete models are constructed by using the embedding dimension and class categories .

7) Based on the definition of information entropy, the single dispersion entropy is:

Finally, the HDE can be expressed as:

3. The parameters selection of HDE method

According to the definition of HDE, five parameters need to be set before calculating HDE. Signal length , embedding dimension , number of classes , time delay and number of decomposition layers . When is too large, it will affect the calculation efficiency and reduce the points participating in the calculation of each hierarchical component. Otherwise, when the value is too small, the frequency band division of the original sequence is not detailed enough to obtain enough hierarchical components from low frequency to high frequency. For these reasons, this paper sets . In Generally, time delay is set 1 to preserve the integrity of feature information in HDE. In order to evaluate the sensitivity of HDE to signal length , this paper calculates the HDE entropy and of 50 groups of white noise and 1/ noise with different length. By calculating the mean and standard deviation at different levels, the degree of node dispersion is judged by coefficient of variation (CV). The coefficient of variation CV is equal to standard deviation / mean. As shown in Fig. 2, the larger the signal length , the higher the stability, and the smaller the error bar. The gap between 1024 and 4096 is no longer obvious. It can be seen from table 1 that the larger the signal length, the smaller the CV value, and the more stable the calculation of HDE. This paper selects the best signal length 1024. 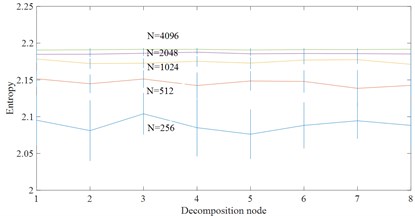 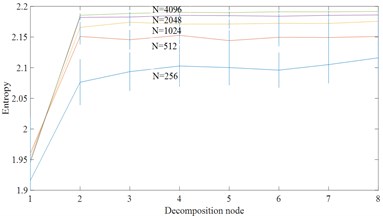 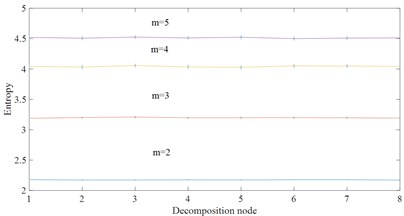 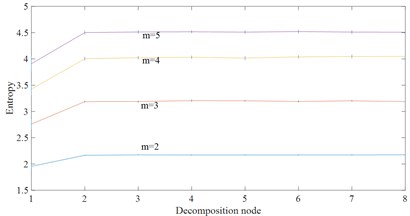 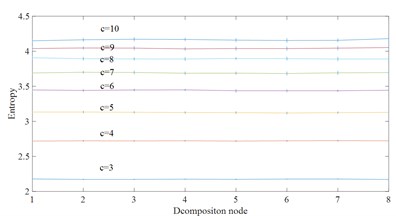 4.1. Introduction to the experiment

In this section, the feasibility of the proposed method is verified by the fault data of Case Western Reserve University rolling bearing fault test rig. The fault test rig is presented as in Fig. 5. It consists of a 2 hp Reliance Electric motor driving a shaft on which a torque transducer and encoder are mounted. Torque is applied to the shaft via a dynamometer and electronic control system. For the tests, faults ranging in diameter from 0.007 to 0.028 inch, were seeded on the drive- and fan-end bearings (SKF deep-groove ball bearings: 6205-2RS JEM and 6203-2RS JEM, respectively) of the motor using electro discharge machining (EDM). The faults were seeded on the rolling elements and on the inner and outer races, and each faulty bearing was reinstalled separately on the test rig, which was then run at constant speed for motor loads of 0-3 horsepower (approximate motor speeds of 1797-1720 rpm). During each test, acceleration was measured in the vertical direction on the housing of the drive-end bearing (DE), and in some tests acceleration was also measured in the vertical direction on the fan-end bearing housing (FE) and on the motor supporting base plate (BA). The sample rates used were 12 kHz for some tests and 48 kHz for others, Further details regarding the test set-up can be found at the CWRU Bearing Data Center website.

All the vibration data are taken with the sampling frequency 12 kHz. These data include four different health states of rolling bearings, such as inner race fault, outer race fault, ball fault and normal. Each fault state can be divided into four different damage degrees, 0.007, 0.014, 0.021 and 0.028 inch, respectively. 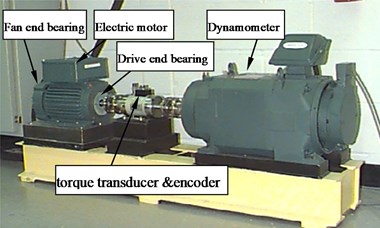 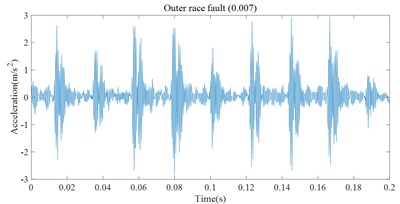 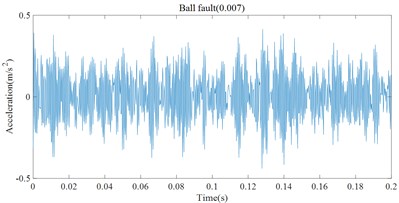 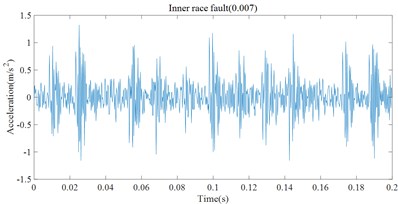 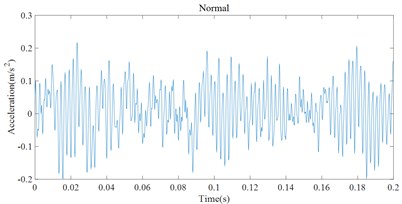 For these fault signal, HDE method is used to estimate the entropy for different fault states. In HDE calculation, embedding dimension 2, number of classes 3, time delay 1 and number of decomposition layers 3. In this feature vector of this experiment, each fault state consists of 50 samples. Each sample includes 8 entropy attributes. Among them, 25 samples of each fault type are randomly selected to form the training sample set (8×250), and the remaining 25 samples formed the test sample set (8×250). This paper utilizes 90 % of cross validation (10-fold Cross validation) estimation. The random experiment is repeated 10 times. Finally, these samples are input into least square support vector machine (LSSVM) [15] back propagation neural network (BP) and naive Bayes classifier (Bayes) so as to realize the intelligent recognition of rolling bearing health status. To verify the superiority of the proposed HDE method, MDE and MSE are also used to extract the rolling bearing fault feature vectors at the same time and input them into LSSVM, BP and Bayes method for pattern recognition. The random experiment is also repeated 10 times. The comparison experiment results are presented in Fig. 7 and Table 4. One can see that the three methods all achieve the best classification results in HDE. For example, for the classification method LSSVM, the average accuracy of HDE is 95.2 %, while the average accuracy of MDE is 88.8 %, and the average accuracy of MSE is 87.2 %. For BP and Bayes, the average accuracy of HDE is the highest compared with MDE and MSE. The main reason is that HDE considers both low-frequency components and high-frequency components in the signal, so as to provide more comprehensive and accurate feature information. But, MDE and MSE only considers the low-frequency component of the original sequence and ignores the high-frequency component [10]. Furthermore, the average accuracy of MDE is the higher than MSE. The main reason is that MDE solves the problem of abrupt change in similarity measurement of MSE [11]. 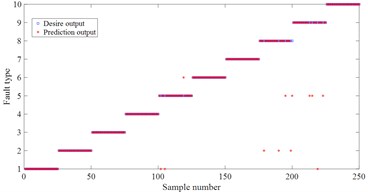 a) LSSVM based on HDE 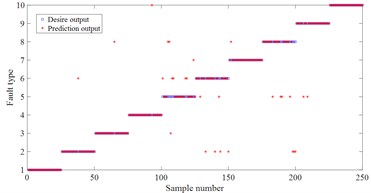 b) LSSVM based on MDE 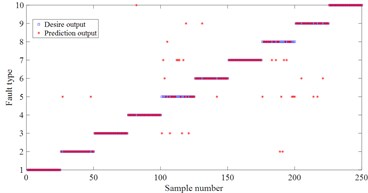 c) LSSVM based on MSE 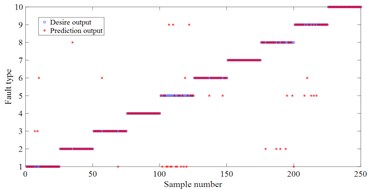 d) BP based on HDE 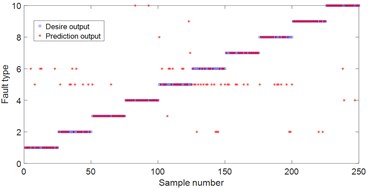 e) BP based on MDE 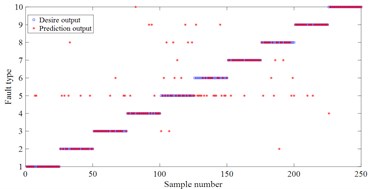 f) BP based on MSE 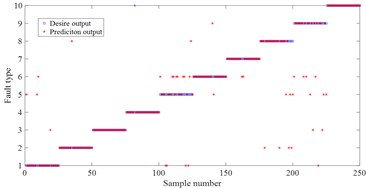 g) Bayes based on HDE 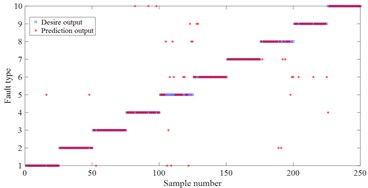 h) Bayes based on MDE 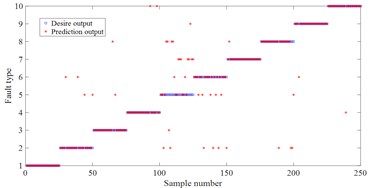 i) Bayes based on MSE

This paper proposes a rolling bearing fault diagnosis method based on the HDE and LSSVM. The effectiveness and practicability of the proposed method are verified by the vibration signals of the rolling bearing. The following conclusions are drawn as:

1) The proposed HDE based on LSSVM can be effectively applied in the fault diagnosis of rolling bearing.

2) HDE can consider the high-frequency and low-frequency components of rolling bearing. On this basis, HDE method can be effectively utilized to measure the complexity of rolling bearing and extract the effect feature vector for different fault types. Experiment results show that the proposed method has higher classification accuracy than the traditional method, MSE, and MDE.

3) Although with higher fault diagnosis accuracy, the new method still in the experimental verification stage based on the rolling bearing experiment system. In terms of this problem, the ability to resist noise should be further improved to make this method more effective in the actual working environment in the future.