Copyright © 2022 Tuncer Ayna, et al. This is an open access article distributed under the Creative Commons Attribution License, which permits unrestricted use, distribution, and reproduction in any medium, provided the original work is properly cited. 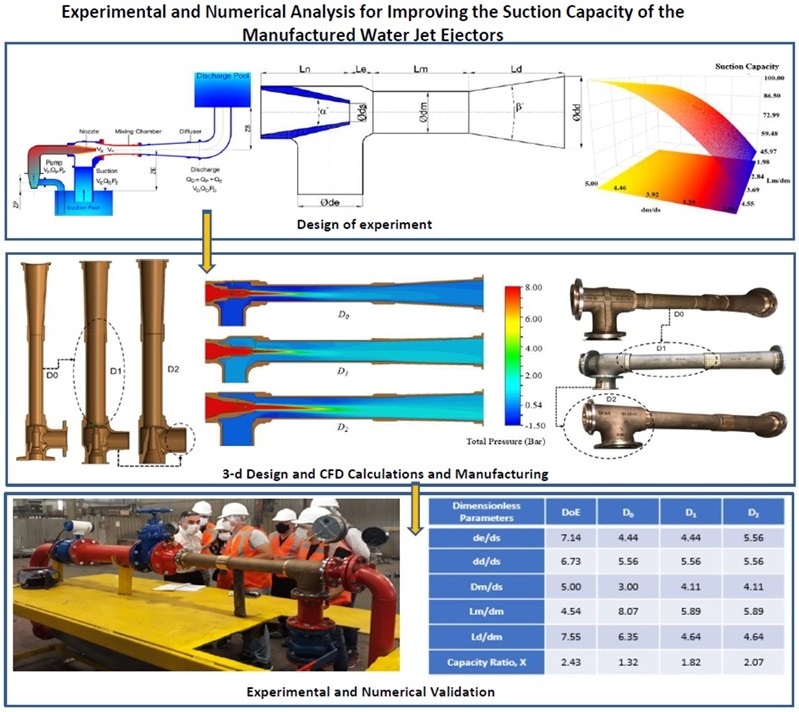 Water jet ejectors perform in a wide range of industrial fields with their simplicity in design, functionally in applications and low maintenance requirement in operations [1]. These devices work effectively in various areas, such as shipbuilding industries, power stations and fire extinguishers units.

The performance of the water jet ejectors is significantly related to their design parameters. Many researchers have worked in the literature on the design and performance prediction methodology of the water jet ejectors for different industrial applications [2-11]. The ejector governing equations were studied with the ejector performance characteristics. It was found that the mixer area ratio, mixer pressure ratio and mixer wall pressure highly affect the ejector performance [2]. The general theory, characteristics and design parameters of a water jet ejectors were investigated with analytical and experimental studies [4]. Huang et al. carried out one dimensional analysis to predict ejector performance [5]. Taygankov studied the water jet ejector design and basic dimension calculation of an ejector [6]. Bogi developed numerical methodology using CFD analysis on the ejector for refrigerators [7]. Benjamin studied the ejector pump terminology and the nozzle geometry [8]. Kracik et al. studied supersonic ejector pumps to develop analytical performance prediction methods comparing experimental studies [9]. Bourhan et al. provided a comprehensive review of ejector design for different working fluids to reveal the performance of the ejector refrigeration system [1]. Rocket powered ejectors for pumping liquid oxygen and hydrogen were analyzed analytically [12]. Ameur et al. studied on nozzle displacement effects on two phase ejector performance experimentally [13]. Neto studied the effects of nozzle-to-throat ratio on the ejector suction lift experimentally [14]. The numerical results of four different turbulence models’ which are -, SST--, RSM and Tr.SST and experimental results were compared [15]. All turbulence models in the study are almost the same results between 1.5 and 2 flow ratios. Therefore, - turbulence model was used in the study in terms of having rapid solution.

Although most of the studies focus only on numerical solutions, a few experimentally validated works can be found for different fluid applications in the literature. In this study, the effects of dimensionless geometrical parameters of ejector on the ejector suction capacity have been examined, and optimum design intervals have been determined by using the design of experiment method. The effect of design parameters on the suction capacity of the water jet ejectors have been investigated through design of experiment (DoE) and the data obtained from the DoE has been used for developing suction capacity of the available water jet ejector. The improved two novel designs are used to manufacture two new bronze water jet ejectors for the naval ship systems.

A water jet ejector transfers the water via vacuuming from the desired vessel or system efficiently. It consists of five different parts, which are pump and suction parts, nozzle, mixing chamber and diffuser part as given in Fig. 1. The Pressure energy created from the centrifugal pump is converted into kinetic energy in the nozzle of the water jet ejector. The pressure energy created by the pump is converted into velocity energy at the nozzle. Due to the pressure drop of the fluid coming from the pump, a low-pressure zone is formed between at nozzle outlet and at the mixing chamber inlet. The created low-pressure zone enables vacuuming the fluid and mix with the activated fluid by the pump in the mixing chamber. The mixed liquid is discharged from the system by entering the diffuser part of the ejector where the velocity energy is converted into pressure energy. The basic principle of ejector pumps is based on the momentum transfer at the ejector zones as given in Fig. 1. Ejector theory considers friction, impact and pressure losses which can be used for incompressible and steady state flow.

Pump and nozzle side energy equation in Eq. (4):

Ejector suction side and nozzle exit energy equation in Eq. (5):

According to the steady state and momentum conservation in Eq. (6):

Energy produced at suction side of ejector pump in Eq. (8):

Bernoulli equation can be written according to the Fig. 2 for ejector pump.

In steady state flow conditions, the flow from the nozzle side forces the fluid on the suction side of the ejector to enter the mixing chamber. Head of suction elbow from the suction pool is approximately 3-3.5 m. Vacuum can be calculated in Eq. (18):

where – suction head of ejector, – mean velocity at the ejector suction side (m/s).

Fig. 1. A schematic diagram of a Schematic of the water jet ejector system 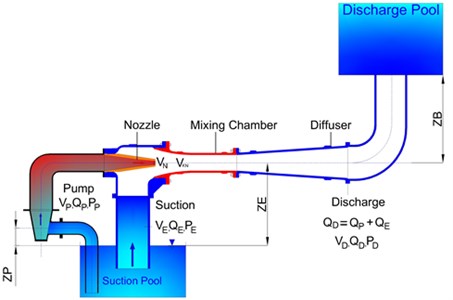 The difference between the observed values and the expected values in any experiment is the fault of the system indicated as in Eq. (20):

In this study, SolidWorks Design of Experiment tool based on Box-Behnken method has been used. Box-Behnken method is an independent quadratic design that does not include full or partial factorial designs. It requires minimal processing. Three levels are needed for each factor. It can be fully or partially rotated. The geometry of the design creates a sphere in the processing range.

In this optimization process, the initial design can be processed through iterative design and development cycles up to the final design. Each design iteration creates new design configuration with a novel set of parameters which change the flow field. The overall dimensions of the water jet ejector are obtained from analytical calculation method which was developed by Wilman [2].

Initial design dimensions are given in Table 2 for each design outputs.

for diameters, for lengths have been used in the dimensionless study. Since nozzle diameter determines the ejector motive capacity, nozzle diameter has been used for determining optimum ejector diameters at a constant pump pressure and flow rate. Additionally, because of the diameter of the mixing chamber is the region where the flow coming from the suction and pump mixes and where the low-pressure zone is formed, the diameter has been used in dimensioning the optimum lengths according to the optimum diameter. 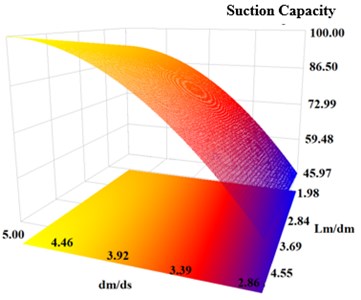 3.2. The effects of suction diameter (), diffuser length () and diffuser outlet diameter on the ejector’s suction capacity

Fifteen different design configurations are created by the software for dimensionless parameters as given in Table 4.

Table 4. Design configurations and results of /, / 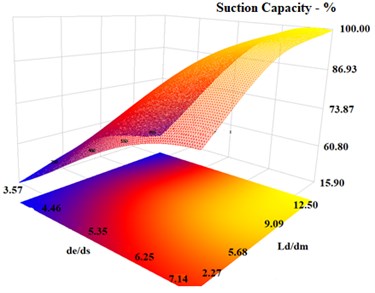 Although, maximum suction capacity can be obtained with the ratio of / = 7.14 in Table 4, the ratio of de/ds in design has been selected 5.56 because of the system installation dimensions. Thus, the suction diameter has been increased from 72 mm to 100 mm in design.

New design configuration parts have been manufactured by using sand casting method. The ejectors are made of bronze (CuSn10) material due to the sea water working environment. The ejector parts are casted in the company’s foundry. Material composition is prepared by material alloying method in the foundry. After casting, the ejector parts have been machined and assembled. The water jet ejectors completed manufacture are given in Fig. 8. 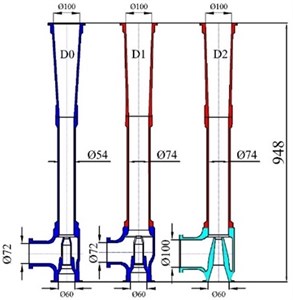 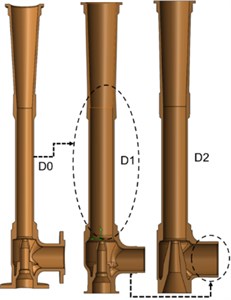 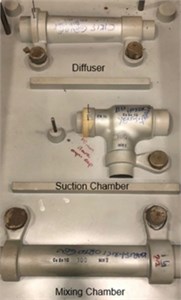 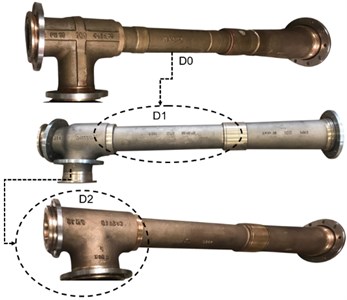 The comparison of numerical, experimental and ‘DoE’ results has been made in the study.

SolidWorks Flow Simulation software has been used for the numerical analysis of the design configurations. Finite volume discretization method is used in the flow simulation. Pre-process setups are given in Table 5. Hexagonal type grid has been used in the computational flow domains.

Boundary conditions are given in Table 5. The governing equations solved during the flow analysis are continuity, momentum, and viscous terms.

Pressure, velocity, and viscous terms are computed during the flow analysis.

Numerical analysis has been completed for the suction capacity improvement. The numerical results for the total pressure contour is given in Fig. 9.

The numerical results for the velocity contours are given in Fig. 10.

The suction capacity related experiments of the water jet ejectors have been conducted at the open loop test rig of Gedik Termo Valve Company.

Calibration of the measurement devices were according of international standards. The suction reservoir capacity is 125 m3. Before conducting the test, air is discharged from the suction pool by using a vacuum pump. When the centrifugal pump is filled with the water. The test is started using 3-phase electric motor which works with 50 Hz, 2980 rpm. 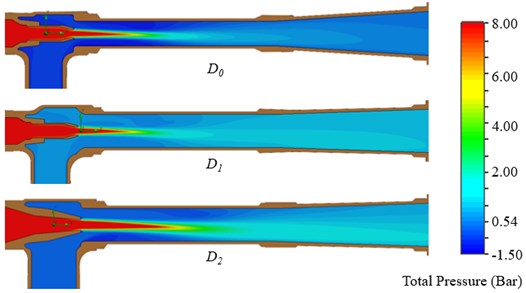 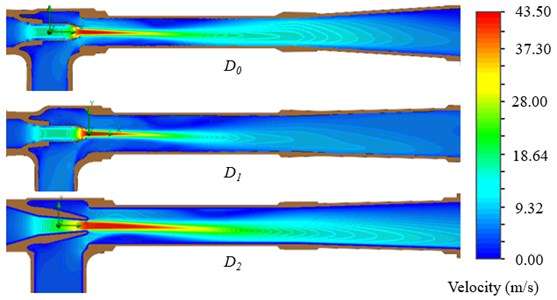 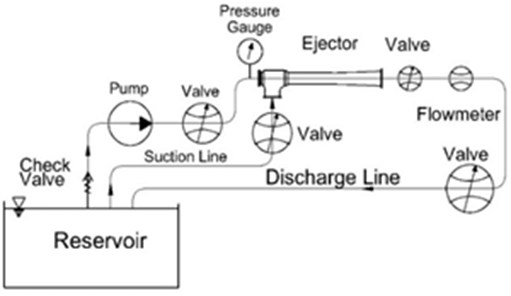 The ejector test setup is given in Fig. 12.

A list of measurement devices, their accuracy, and maximum uncertainty associated with the calculated quantities are provided in Table 6. 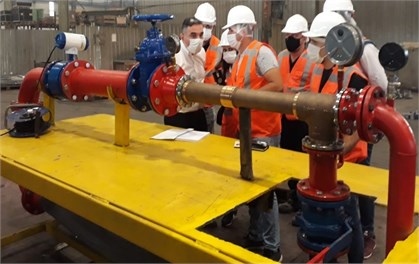 Table 6. Uncertainty of the measurement devices

5.3. Comparison of the experimental results with the numerical counterparts

Comparison of numerical and experimental results are given in Table 7. As the results have been compared, deviation between experimental and numerical is very close and deviation is within the tolerance which have been indicated in Lloyd Naval Ship Rules.

5.4. Comparison of the experimental results with the numerical counterparts

The dimensionless ratios obtained from DoE and design applications which are , and are given in Table 8. As / and / increases the capacity ratio increases. Suction and mixing diameters directly affect the suction capacity of the ejector as seen in Table 8.

and geometric parameters of the ejector don’t directly have correlation with ejector suction capacity as seen in Table 8 and these both length parameters effect the ejector efficiency.

The higher capacity ratio can be reached by using the DoE data in Table 8 for the next designs.

Authors would like to thank Gedik Termo Vana A. S. for their contribution during the numerical and experimental analysis of the project.