Copyright © 2023 Jing Tang, et al. This is an open access article distributed under the Creative Commons Attribution License, which permits unrestricted use, distribution, and reproduction in any medium, provided the original work is properly cited.

This paper presents a two-degree-of-freedom(2-DOF) upper-limb exoskeleton actuated by electro-hydraulic servo system (EHSS), and position control based on active disturbance rejection control (ADRC) strategy. Proportional integral derivative (PID) controller is widely used in EHSS system because it is model free, and its parameters can be adjusted easily. However, the nonlinear dynamics of EHSS is subject to parameter variations and friction effects during operation. The trajectory tracking performance of this method is limited due to the uncertain model parameter and external disturbance of EHSS in exoskeleton. To actively compensate the total disturbance including the system uncertainty and external disturbance, and ensure the finite time convergence of disturbances, the ADRC controller is developed. The disturbances can be estimated by the extended state observer (ESO) and compensated during each sampling period in the ADRC method. The proposed control strategy not only satisfies the steady-state accuracy demands, but also effectively resists to the system uncertainties and the disturbance. To validate the feasibility of the proposed control strategy, the simulations were carried out. The numerical simulation results clearly indicate the superior performance of proposed ADRC method over the regular PID control approach. 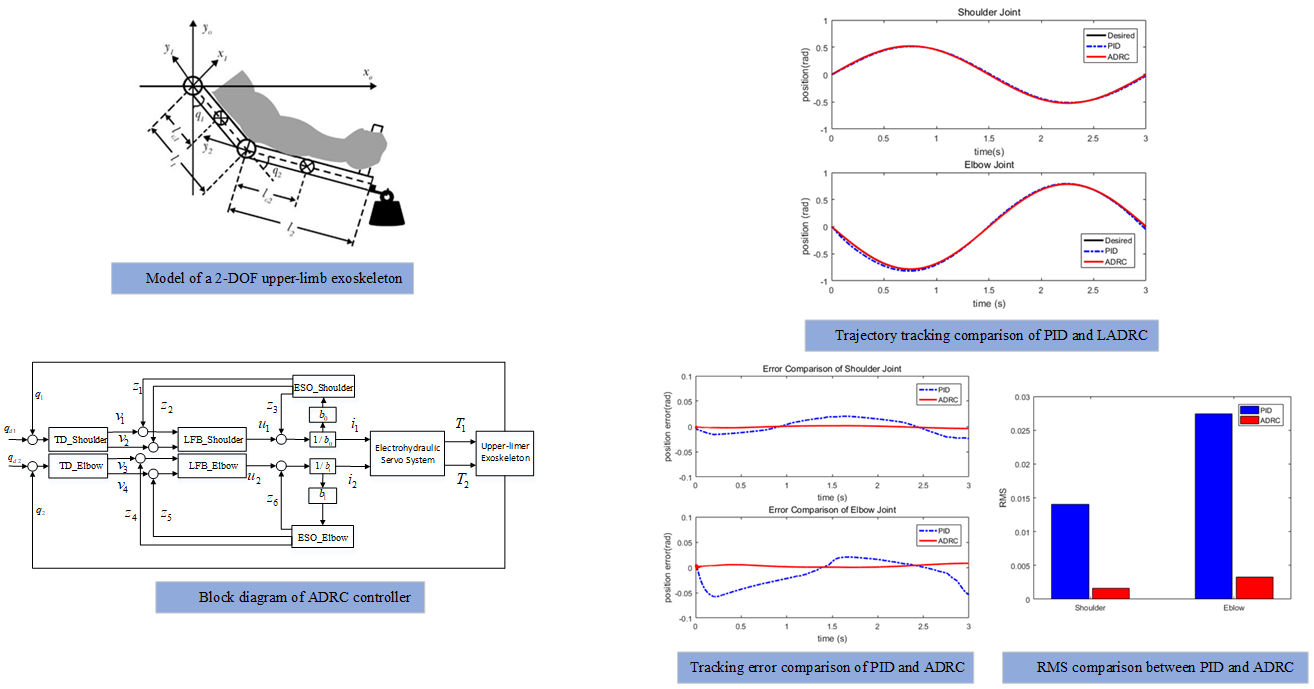 Upper-limb exoskeleton robots are generally applied in a variety of different fields, such as rehabilitation robots [1-3], assistive robots [4-6], human amplifiers [7, 8] and other uses. Robotic exoskeleton is the complex multi-input and multi-output (MIMO) with time varying dynamics and highly coupled nonlinear [9]. Compared with industrial manipulators, exoskeletons suffer severe kinematic and dynamic uncertainties and external disturbances. Electro-hydraulic actuators have been used in exoskeleton in a wide number of applications by virtue of their high power to weight ratio and the ability to apply very large force and torque. However, the dynamics of hydraulic systems are highly nonlinear [10]. Aside from the nonlinear of the electro-hydraulic actuators, they also have large extent of model uncertainties and uncertain nonlinearities such as the frictions. Moreover, the robotic exoskeleton and the actuators are coupled with each other, and there are uncertainties, un-modeled dynamics and disturbance [11]. The design of upper-limb exoskeleton is one of the most challenging tasks to operate under various complex environmental conditions.

Apart from model-based controllers depend on accurate knowledge of the system, non-model based methods exist such as ADRC. To actively estimate and compensate for disturbance, some ADRC techniques are further studied. The original ADRC was first proposed by Han in 1998. As the core of the ADRC, the nonlinear extended state observer (ESO) can estimate and compensate for the total disturbance in the system to achieve stronger anti disturbance performance [16]. The ADRC technique based on ESO, has been successfully used in robot application [17]. Huang et al. presented an optimized linear active disturbance rejection controller to improve the response rapidity and anti-interference ability of a pneumatic servo system [18]. Pawar S. N. et al. designed a modified reduced order ESO based ADRC to estimate the lumped disturbance actively as an extended state and compensate its effect by adding it to the control [19]. As an alternative, the scheme avoids the complete knowledge of the dynamics, simplifying the model to a set of disturbed systems where the set of disturbances includes external disturbance inputs, internal perturbation and non-mode dynamics, which are on-line estimated for subsequent proper cancellation [20, 21]. Since the stability condition of the closed-loop system is expressed in the form of an explicit set of parameters, the tuning law of the ADRC can be intuitively obtained and described in engineering practice.

The goal is to design a controller for upper-limb exoskeleton actuated by hydraulic that can provide good position tracking to compensate for the robot’s dynamics and can provide comfortable human-machine interaction. The main contributions of this paper are listed as follows. First, the ADRC was proposed to improve the performance of the upper-limb exoskeleton through the disturbance estimating and finite-time convergence. Second, the effectiveness of the proposed method is verified by numerical simulation through comparing with the PID and ADRC method. This paper is organized as follows. The next section presents the 2-DOF upper-limb exoskeleton kinematic model and the EHSS model. While the ADRC method for position control is presented in Section 3. To demonstrate the performance of the proposed method, the simulation results are presented in Section 4. The main content is summarized and key point of future work are discussed in the final section.

Without loss of generality, the dynamic equation of the upper-limb exoskeleton robot can be express as follows:

where is a vector of actuator joint torque; is a vector of exoskeleton angles for revolute joints; and are the joint velocities and accelerations respectively. is the total disturbances of the system. Meanwhile, is the inertia matrix, is the centripetal matrix, and is the gravity torque, respectively. , and denote the uncertainty of the robot system. The specific expression of the matrices , and can be described as: 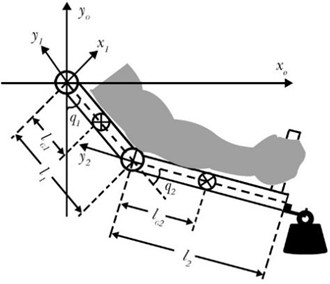 Based on the dynamics model of robotic exoskeleton shown by Eq. (1), The system should be decoupled, and matrix can be approximated as . Assumption:

The mathematical model of robotic exoskeleton can be expressed as below:

The inertia matrix is symmetric positive definite, Eq. (4) can be rewritten as:

where, . is the total disturbance of the system, including system error, external disturbance and couple term. is the acceleration of the revolute joints.

2.2. Modeling of the electro-hydraulic servo system

The structure of EHSS is shown in Fig. 2. In many EHSS applications, valve dynamics is much faster than other parts of the system. Therefore, valve dynamics can be neglected, we assumed that the servo valve as a proportional block, by following approximation:

where is a positive electrical constant, and is the input current.

Fig. 2. The structure of EHSS 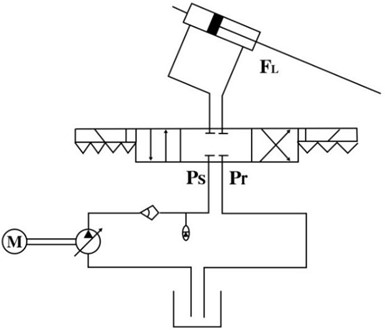 By applying the continuity law to each actuator chamber, the external leakage of EHSS is extremely small and can be neglected. The flow equation of actuator’s valve is described as:

The pressure dynamics in actuator chambers can be described as:

where , are the control volumes of the actuator chambers; is the effective bulk modulus of the system; is the coefficient of the total internal leakage of the actuator due to the pressure; is the load pressure of the dynamic actuator. The actuated force can be express as:

The EHSS driving torque can be express as:

where is arm of torque.

For the 2-DOF upper-limb exoskeleton, two sets of EHSS generate the force to drive the robotic shoulder and arm respectively:

where , , and are the geometric length of the upper limb exoskeleton. Fig. 3 provides the design geometry of the exoskeleton hydraulic cylinder.

The parameters of Electro-hydraulic Servo system are used in Table 1.

The purpose of our upper-limb exoskeleton design is to evaluate the position tracking performance. To implement this goal, the desired position should be acquired. In this system, the desired angles for revolute joints for the test purposes are sinusoidal signals at a sampling frequency of 1000 Hz:

Fig. 3. The design geometry of the exoskeleton hydraulic cylinder 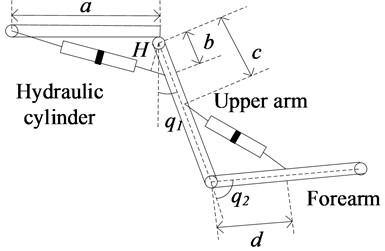 The conventional PID controller is widely adopt due to its simple structure and its gains can be easily tuned. The fixed PID controller of the hydraulically actuated exoskeleton system is shown in Fig. 4, and can be constructed as follows:

where (), () and () are proportional, integration and differential gains respectively. Moreover, and are the errors between the desired positions and actual positions.

The ADRC method adopt nonlinear function, resulting in difficult analysis and parameter setting complex. Therefore, ADRC is designed based on the dynamic of robotic exoskeleton. In this paper, the dynamics model of the exoskeleton leg is multi-input and multi-output (MIMO) system. The Block diagram of ADRC controller is shown in Fig. 5. After system is decoupled, ADRC can be designed to control each joint respectively. Eq. (5) can be split into two independent equations for the shoulder and elbow joint as follow:

The ADRC controller consist three main parts, i.e., the tracking differentiator (TD) to provide derivative of the input signal, the extend state observer (ESO) to estimate the states and the disturbances and the nonlinear feedback to generate the control signal. TD is used to generate the arranged transition process and extract the input signal’s differential of each order. The tracking differentiator is designed in the form of:

where and are desired angles, and are the observer gains to ensure convergence of the error. ESO is designed to estimate and compensation total disturbances of hydraulically actuated exoskeleton system. Two extended state observers can be obtained as follows:

where , and , are the proportional and differential gains, respectively.

The objectives of this section are to compare the tracking performance of PID control approach and the ADRC strategy. There are two ESOs to estimate existing disturbance for the shoulder joint and the elbow joint respectively. The parameters of the EHSS and the upper-limb exoskeleton are listed in Table 1. Two simulations are carried out, in MATLAB, by using PID control strategy and the ADRC. The parameters of ADRC are shown in Table 2, and are the amplification coefficients of and . is the bandwidth of observer, and the selection of its value affect the tracking effect.

Fig. 6 shows the tracking error of each joint with different in proposed ADRC. As seen in the figure, the error decrease as the value of increases, the larger the value of is, the faster the errors converge. 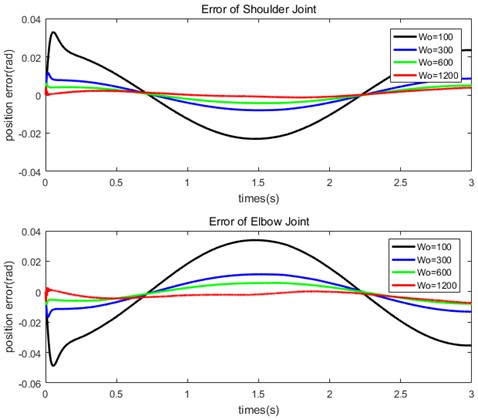 4.2. Comparisons of the conventional PID controller and ADRC controller

The system simulations are carried out, in MATLAB (Version R2016a), by using PID control strategy and ADRC approach presented in respectively. The parameters of the controllers are chosen using Ziegler and Nichols method [23]. Then, the optimum parameters for the PID controller can be provided as 240, 40, 180 and 200, 80, 120. The external disturbance is generated by a sinusoidal signal as follows: 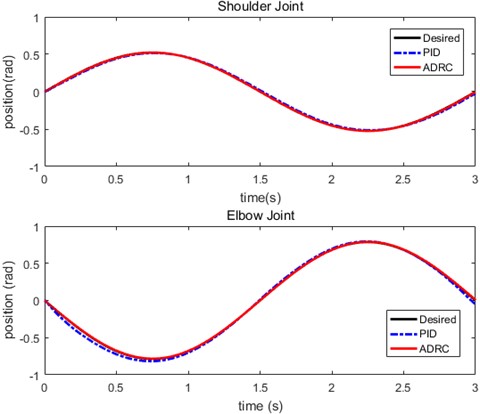 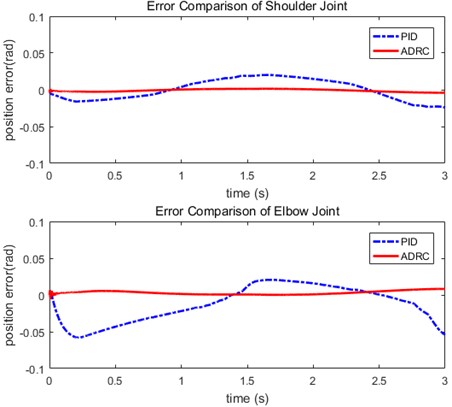 To evaluate the performance of the general PID control approach and the proposed method, the tracking errors are compared. The tracking performances are indicated by root-mean-square (RMS) error [12]: 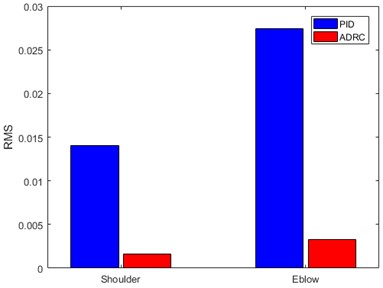 Fig. 9 provides the RMS errors of the human-machine position. From Fig. 9, both of the tracking errors of shoulder joint and elbow joint under the ADRC approach are smaller than those under the conventional PID control strategy. It is obviously to see that the proposed ADRC method is better than PID control with its robustness to external disturbance or un-modeled system dynamic, and it will be easy to implement.

The ADRC strategy for 2-DOF upper-limb exoskeleton, under the actuation of hydraulic, was explored in this paper. Considering the unavailability of precise model parameters and the uncertain disturbances in upper-limb exoskeleton actuated by EHSS. The proposed control strategies not only reduce the influence of unknown disturbances and eliminates the dependence on accurate model parameters, but also improve the tracking accuracy of the exoskeleton system and make the error converge quickly. The simulation results validate the effectiveness of the proposed method. The limitation of our approach is tuning the ADRC parameters automatically. In the future, the combination of ADRC with other model free tuning techniques will be investigated to reduce this limitation. It is proposed for the further development to investigate the robustness of ADRC for the external load uncertainty and motion velocity change. Moreover, Future work will include applying different types of other path tracking trajectories.