Copyright © 2019 Jianwei Huang, et al. This is an open access article distributed under the Creative Commons Attribution License, which permits unrestricted use, distribution, and reproduction in any medium, provided the original work is properly cited.

Milling chatter is a kind of self-excited vibration produced by the interaction between the tool spindle system and the workpiece during the milling process [1]. In order to obtain good quality of the surface, ensure machining accuracy and avoid tool damage, milling chatter must be prevented. In actual manufacturing practice, operators usually choose the cutting parameters conservatively to avoid the negative effects of chatter. However, the real machining performance of the machine tool will be reduced, and the manufacturing cost is increased. Therefore, the control of milling chatter and the prediction of its stability is crucial to achieve high performance and high efficiency machining.

Over the years, scholars all over the world have explored the method of controlling chatter from three aspects: spindle parameters, tool structure and variable spindle speed milling. And many achievements have been made.

The first kind of method is to reduce vibration or restrain vibration by setting additional control device on the machine tool. According to the control mode of the additional device, it can be divided into three types: active control, semi-active control and passive control. Ganguli et al. [2] investigated the effect of active damping on regenerative chatter instability. Munoa et al. [3] used the machine tool’s own drives to suppress chatter with the help of an external accelerometer located close to the tool center point. Duncan et al. [4] increased the damping of the spindle-cutter system near the chatter frequency by adding additional dampers to the spindle.

Many scholars have carried out extensive research on the control of milling chatter and its stability prediction. However, these studies are limited to study the effects of changing a single parameter or structure on milling chatter, and the research to study the effects of combined methods on the suppression of chatter has not been found. Variable spindle speed and variable pitch cutters milling have been verified respectively for their suppression of chatter, but the range of application is very limited. Therefore, this paper aims to study the stability of milling chatter when these two methods of chatter control are adopted simultaneously. The structure of the paper is as follows. In Section 2, the mathematical model of variable spindle speed milling with variable pitch cutters is introduced. In Section 3, the transition matrix of the mathematical model of milling system is obtained by using an improved full-discretization method, and according to the Floquet theory, the criterion of stability is obtained. In Section 4, with the selected system parameters, the stability prediction is carried out and the stability lobes diagrams are drawn, the influence of spindle modulation parameters on stability is analyzed, and the stability prediction results under different working conditions are compared. Time domain simulations are carried out to verify the results in Section 5. Conclusions are presented in Section 6.

The milling physical model used in this paper is a two degrees of freedom system. The model of a workpiece-tool system is shown in Fig. 1. 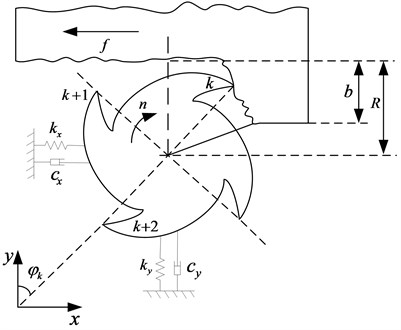 The cutting force of the variable pitch helical cutter can be written as follows:

where is a window function with the following form:

and are the angles when the teeth enter and leave the workpiece. And is a dynamic stiffness matrix:

The radius of cutting tool is , and is a helix angle, is the number of flutes and is the normal rake angle. is the specific cutting energy, is a proportionality factor, is the friction coefficient for sliding between the chip and the rake face of the cutting tooth.

In this paper, the chatter suppression effect of a sinusoidal modulation spindle speed is studied. The spindle speed varies in form as:

where tooth spacing angle is:

where represents the angle between the th teeth and the 1th teeth. The time delay in variable speed milling process with variable pitch cutter can only be given in the implicit form:

For small and small , can be approximated as:

where the nominal delay is:

5) If and , or and , there is no cutting force on the tooth flute, the lower and upper limits of the integration are both 0.

when , are rational number and relative primes, the milling system is periodic at the principal period , the Floquet theory of periodic DDEs can be applied [32].

Fig. 2. The lower and upper limits of the integration of cutting force

The first step of improved full-discretization is the construction of the time interval. Divide the principal period of the system into intervals with length . The time-step can be expressed as:

The average delay for the discretization interval is defined as:

The series of integers is introduced as follows:

where int(*) is the function that rounds positive numbers towards zero. Since the time delay is varying periodically with time, integer may be different for different discretization steps. The maximum value of is introduced as:

Note that can be considered as an approximation parameter regarding the length of the time delay.

Solving Eq. (20) as an ordinary differential equation over the discretization interval with initial condition , the following equation is derived:

Using the improved full-discretization method to discretize all the items in Eq. (31), the time delay term is discretized as:

The state term can be approximated as:

The coefficient matrix , can be approximated as follows:

where coefficient matrix , , , can be expressed as:

where denotes the identity matrix. Considering that the system state depends only on , and , and nothing to do with . And the maximum value of is . A new state vector is introduced as follows:

According to Eq. (47), in the principal period , we can obtain that:

The approximate Floquet transition matrix is obtained as:

Based on the model proposed above, the stability limit is predicted. When calculating and drawing the stability lobes diagrams, the axial depth of cut and nominal spindle speed are chosen as the control parameters. The variable pitch cutter with varying pitch angles of 60°-120°-60°-120° is used in the stability limit prediction. The spindle speed modulation parameters of variable speed milling are indicated in each drawing. Other parameters as shown in Table 1 and Table 2 are selected from the Altintas’s paper [5].

Table 1. Parameters of the workpiece-tool system

In order to investigate the effect of variable spindle speed milling process with variable pitch cutter (VSVP) on chatter suppression, under the condition of 50 % immersion down-milling operations, the stability lobes diagrams of CSVP and VSVP are plotted in Fig. 4. The dot line and solid line represent CSVP and VSVP, respectively. 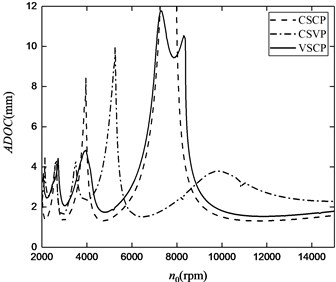 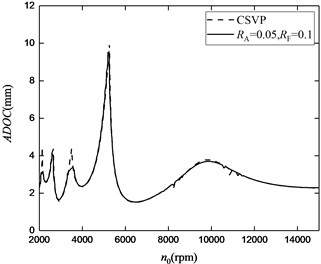 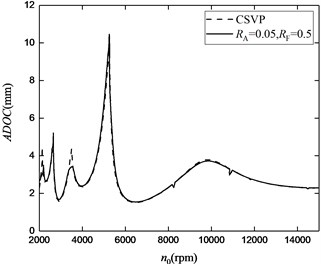 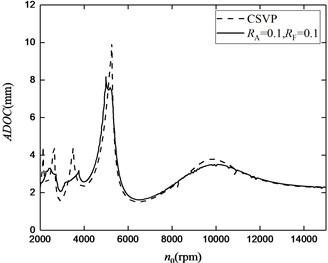 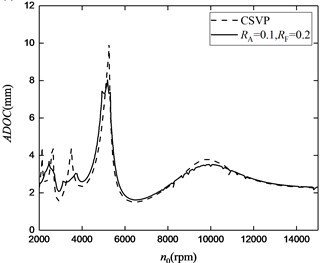 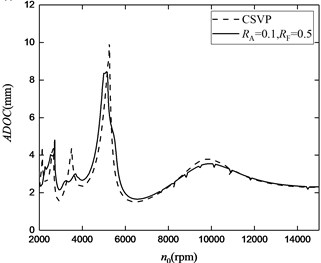 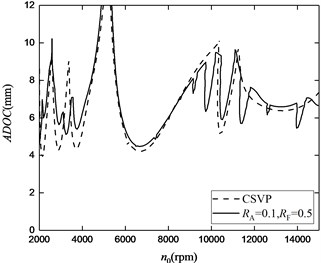 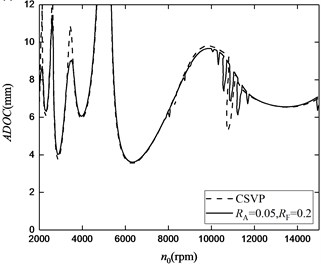 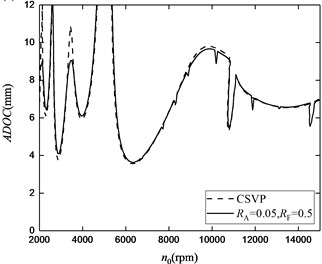 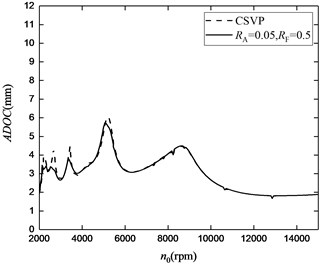 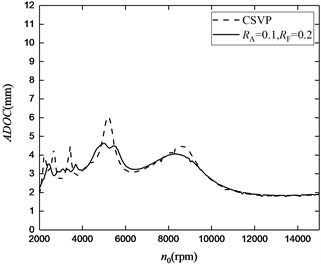 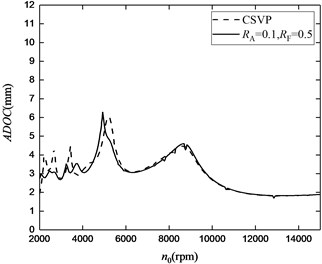 In order to verify the accuracy of stability prediction results, the cutting state of fixed working points is simulated by Simulink. Use the parameters in Tables 1 and 2, under the condition of 50 % immersion down-milling operations, and the pitch angles are 60°-120°-60°-120°, 0.1,  0.5, the stability lobes diagrams of VSVP are plotted in Fig. 8. Three working points are selected in Fig. 8 named A ( 3000, 3), B ( 5000, 4) and C ( 12000, 2), respectively. Under the same system parameters and working conditions, time domain displacement curves of A, B and C are obtained by Simulink, and then the frequency spectrums of these three points are also obtained. Displacement curves and frequency spectrums are plotted in Fig. 9. 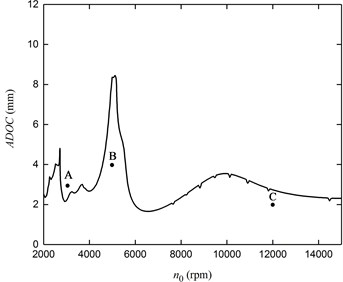 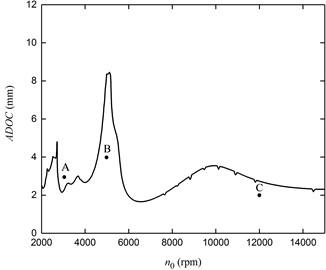 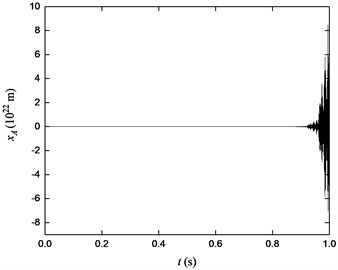 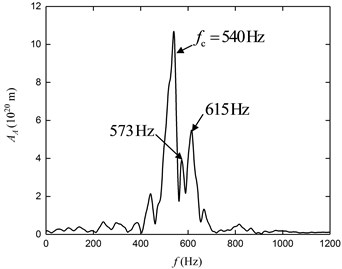 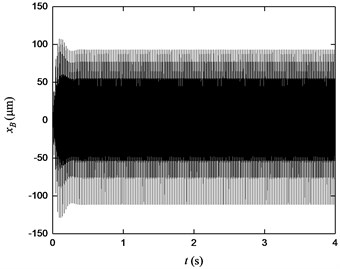 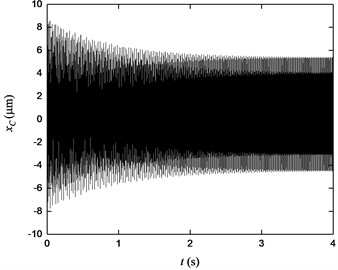 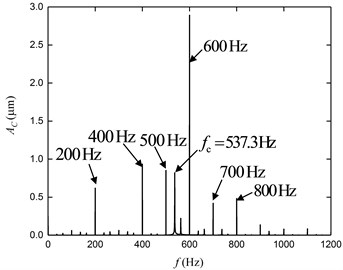 In this paper, the improved full-discretization method is used to predict the stability of variable spindle speed milling process with variable pitch cutters. The main results of the present work are summarized as follows:

1) When the variable speed milling and variable pitch cutters are adopted simultaneously, the stability of milling system can be improved, and the chatter control effects of the combined method are better than the single method.

2) When the values of modulation amplitude ratio and modulation frequency ratio are bigger, the stable cutting area of stability lobes diagram will be larger, and the stability will be improved.

4) Under the condition that the pitch angles vary linearly, the stability of variable spindle speed milling process with variable pitch cutters is better than that of pitch alternate change case.

5) According to the simulation results in time domain by Simulink, the stability prediction results are verified.

We would like to express the appreciation to the National Science Foundation of China (Grant No. 51675901), Collaborative Innovation Center of Major Machine Manufacturing in Liaoning.