3The Center of Metrology and Testing, CAEP, 621900, Mianyang, China

Copyright © 2020 Yahong Zhang, et al. This is an open access article distributed under the Creative Commons Attribution License, which permits unrestricted use, distribution, and reproduction in any medium, provided the original work is properly cited. 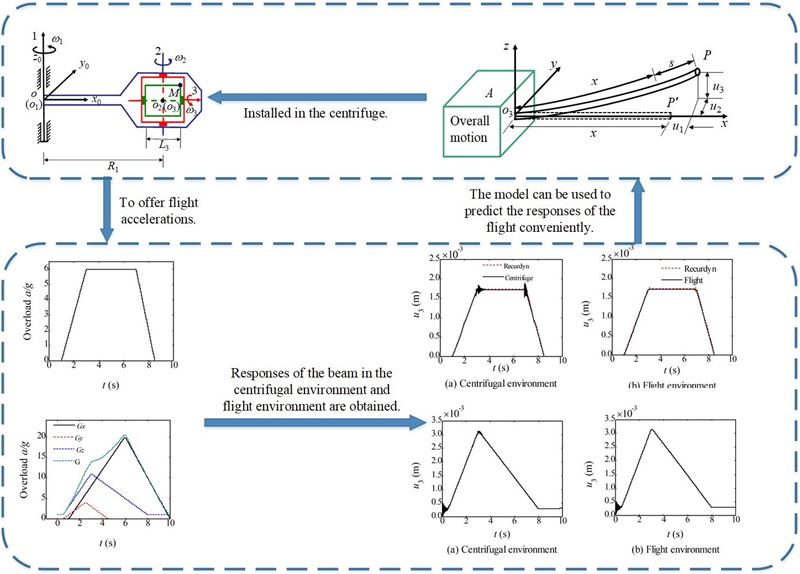 With the rapid development of the aerospace technologies, greater maneuverability of aircrafts are required, which results in that aircrafts bear three-dimensional and high accelerations with high change rates (jerks). Some flight accelerations could reach as high as 20 , and jerks could also reach 15 /s [1]. This kind of load environment has a great impact on the performance of aircraft structures and airborne electronic equipment. In some cases, the loads induced by the accelerations could even cause fatal damage. To ensure the safety of aircrafts, the dynamic flight simulation (DFS) tests are indispensable and important for the aircraft design.

In the field of dynamic flight simulation tests, Sinapius [2] used modal force synthesis techniques to determine the test load to ensure that the test results reflect the actual flight conditions. Chen [3], Han [4] and Qiu [5, 6] et al. performed dynamic flight simulation tests on different vibration platforms that can provide accelerations in three directions. However, these vibration platforms are not able to provide sustained acceleration levels due to the stroke limitation of the prismatic actuation devices. Centrifuges can provide sustained forces to simulate the high-g flight accelerations [7-9]. Three-axis centrifuges with 3 degree-of-freedom not only have the advantages of providing sustained high-g accelerations, but also have the ability to provide abrupt accelerations. Kiefer [10], Jr [11], Glaser [12] and Dourado [13] et al. used centrifuges to simulate the flight environment, which demonstrated that the three-axis centrifuge can be used to simulate the three-dimensional flight environment with high fidelity.

2. Kinematic analysis of a beam in the three-axis centrifuge

The schematic diagram of the three-axis centrifuge used in this research is shown in Fig. 1 [16]. The No. 1 axis is parallel to the No. 2 axis, and the axis of No. 2 and No. 3 are vertical. The angular velocity of the three axis are represented by , and , respectively.

The experiment module is fixed with the third axis. The beam is mounted in the experimental module along the No. 3 axis, and its geometry is shown in Fig. 2. Considering the flexibility of the beam, the rigid-flexible coupling kinematics model of the beam in the three-axis centrifugal environment is established. The coordinate is consolidated on the third axis, and the corresponding base vectors are , and , respectively. The motion of the point in the reference frame is analyzed. After deformation, arrives at the position of . , and respectively represent the deformation of in the direction of , , , and a non-Cartesian variable is adopted to denote the arc length stretch. 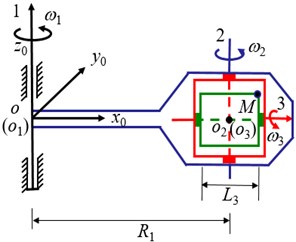 Fig. 2. The geometry of a beam mounted in the experimental module

The absolute velocity and acceleration of the reference point are respectively expressed as:

The absolute angular velocity of the beam is expressed as:

According to the motion synthesis method, the absolute velocity and acceleration of the point can be expressed as:

3. Dynamic model of the beam

For the beam shown in Fig. 2, the geometry relationship of the deformation is approximated as:

The deformation energy of the beam is:

According to the Kane’s method, for the beam in the centrifuge, the generalized active forces and generalized inertia forces form an equilibrium force system and thus:

In Eq. (10), the generalized coordinate (1, 2, 3) is the modal coordinate of the beam, and is the generalized velocity. Substituting Eqs. (5-8) into Eqs. (10-11), we can obtain the expressions of and . Using the Rayleigh-Ritz method to describe the displacement caused by elastic deformation, we can then express , , as:

For the cantilever beam in Fig. 2, the expressions of , and are presented as:

where and are normalization coefficients which can be determined by the boundary conditions of the beam.

The modal orders selected in the subsequent calculation are 1, 3, 3. This means that three modes bending vibrations both in and directions are considered, and one mode vibration in the axial direction is considered.

Substituting the displacement functions expressed in Eqs. (12a-12c) into Eqs. (10-11), the generalized active forces corresponding to , and are derived as:

The generalized inertial forces of the three directions are given as:

( 1, 2, 3) represents the generalized velocity corresponding to the th modal coordinate (generalized coordinate) in the q direction. The detailed expressions for are given in Appendix A.

In Eq. (16), , , are matrix, and F is a column, where . The detailed expressions of , and in Eq. (16) are shown in Appendix B. The matrix is the damping matrix caused by the gyroscopic action, which represents the mutual coupling of the rigid motion and the flexible vibration.

In this case, the flight accelerations are constant and the accelerations in the three directions are: 6 g, 0. The response of each point on the beam in the three-axis centrifugal environment is calculated and compared with the response in the flight environment. Due to the constant acceleration, the beam deforms statically. The deformation along the length of the beam is shown in Fig. 3(a), and the zoom in view for the range from 0.2985 m to 0.3 m is shown in Fig. 3(b).

Fig. 3. Deformation of the beam in the different environments under the constant accelerations 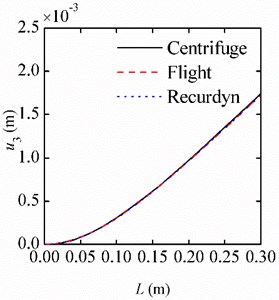 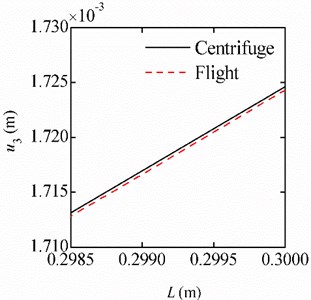 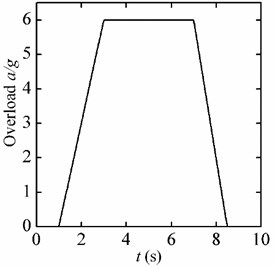 Fig. 5. Displacement responses of the free end under the unidirectional variable accelerations 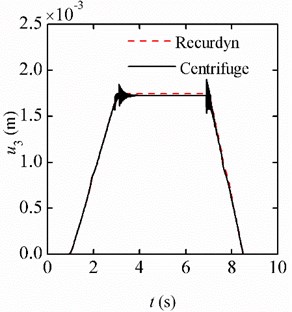 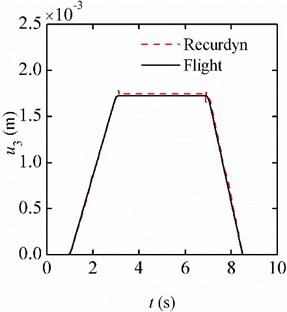 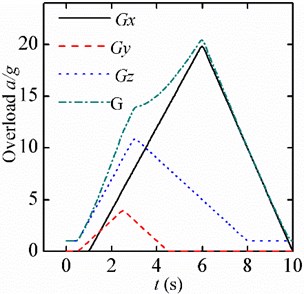 Fig. 7. Displacement responses of the free end under the three-direction variable accelerations 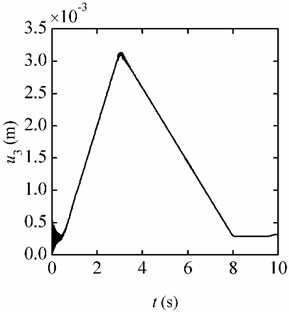 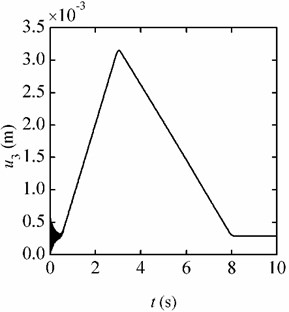 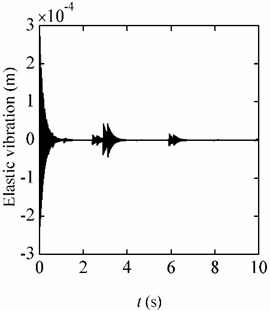 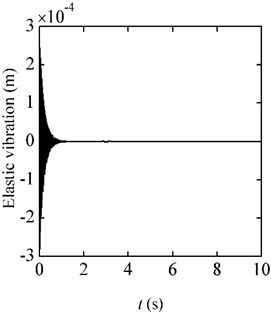 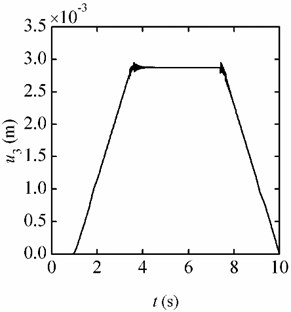 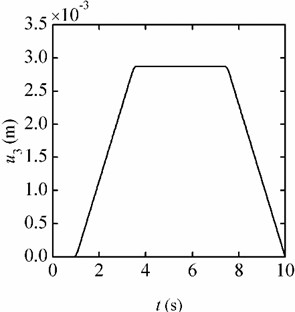 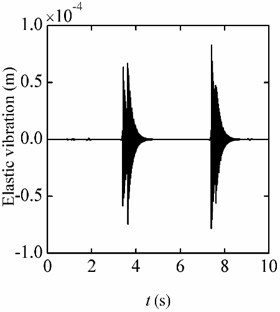 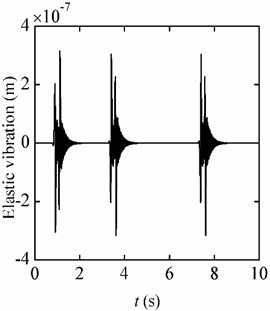 The financial support from the Joint Fund of the National Natural Science Foundation of China and the China Academy of Engineering Physics, NSAF (Grant No. U1630120) is gratefully acknowledged.