Copyright © 2020 Luyun Chen, et al. This is an open access article distributed under the Creative Commons Attribution License, which permits unrestricted use, distribution, and reproduction in any medium, provided the original work is properly cited.

To improve the resistance to vibration and reduce its structure mass, the structural dynamic properties of hexachiral structure with negative Poisson’s ratio (NPR) are investigated. The optimization function of natural frequencies parameters is established, in which the thickness of circular nodes wall and ligaments of the hexachiral structure are defined as design variable. By normalizing the weight coefficients corresponding to the natural frequencies of different orders, the multi-objective optimization problem is converted into a single objective structural optimization problem. Finally, the cell of hexachiral structure for example, by introducing the response surfaces method, the structural optimization is carried out. The numerical analysis shows that the natural frequency is greatly increased, and the vibration resistance is strengthened. The results provide technical support for the design and application of high performance materials. 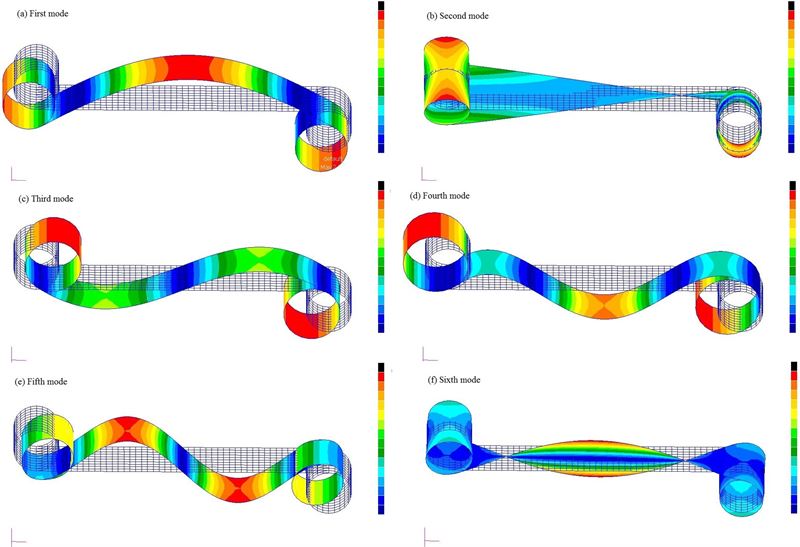 The angle between the imaginary line connecting the circular node centers and the ligament is defined as , the angle between ligaments is denoted as 2, and the geometric relationships can be expressed as follows:

Since the geometric property of the hexachiral structure lattice is in-plane hexagonal symmetry, according the Eq. (1), the angle is always 30°, and the hexagonal chiral topology is invariant to in-plane rotations by the angle 2, regardless of the topology parameter.

To analyze the dynamic property of the chiral honeycomb structure, studying the mechanical properties of the cell structure is necessary. At first, several hypotheses are defined to establish the motion equation of the hexachiral structure: (1) six ligaments are attached tangentially to each rigid circular node; (2) the application of loading in one direction causes the rotation of circular node which gives rise to auxetic behavior in the transverse direction; (3) Poisson’s ratio close to –1.

When the hexachiral structure is subjected to external force, all of the ligaments are extruded to produce bending deformation, and the circular node is twisted under the action of each ligaments. Fig. 2 shows the deformations of the circular nodes and ligament (dotted line).

where, is the bending stiffness of ligament section, is the mass per unit length of ligament. According to the Euler-Bernoulli beams theory, the vibration mode functions of the ligament beams can be obtained by separating variables:

where ~ are the integral constant, , and is the natural circular frequency of the ligament beam.

where , . Eq. (5) is a transcendental equation. The natural frequencies of the ligament beam structure are related to the design parameters of the circular nodes, ligament and the microscopic material parameter.

where is design variables for n dimensions, such as the thickness of ligament or circular node wall; is the natural frequency normalization value; is constraints condition, such as cell structure mass; and are lower and upper bounds for design variables, respectively.

Generally, the relationship between the response variable of interest and the predictor variables (, ,…, ) may be known exactly as a description in the following equation:

where (, ,…, ) are the independent variables, is the model error and includes measurement error and other variability. The approximation function is the first-order model can be written as follows:

where the constant coefficient, the linear effect of the kth factor coefficients and is the error observed in the response . The successful application of RSM relies on the identification of a suitable and precise approximation for (, ,…, ). A second-order polynomial could be of the type:

The common approach in the RSM is to use regression methods based on least square methods. The method of least squares is typically used to estimate the regression coefficient, which is shown in the following equation:

The natural frequency optimization problem can be described as a response surface by viewing it as an input-output model. As mentioned in Section 4, the variables are defined as , , and the values of them are listed in Table 3. In the RSM, these variables are transformed into coded variables that are dimensionless, zero mean and the same standard deviation.

In this paper, the Latin square experimental design using optimization algorithm makes the sampling points distributed as evenly as possible in the design space. Fig. 3 shows the uniform Latin square method designed the rational experimental samples with two factors, in which, there are 11 points sampling in the spatial arrangement. 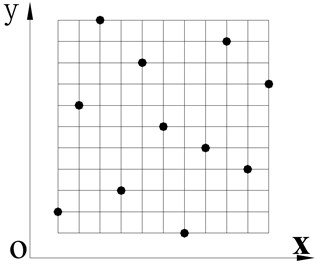 In modal analysis of hexachiral structure, free boundary condition is chosen to reduce the influence of boundary. In present work, all FEM predictions are calculated by using MSC.Patran/Nastran 2012.2, this commercial software is a widely used numerical tool for structural dynamic response analyses. The finite element model of the structure is shown in Fig. 4, which includes 980 quadrilateral elements and 1067 nodes.

The chiral honeycomb structure is made of aluminium alloy with the following mechanical performance: density, 2700 kg/m3; modulus of elasticity, 75 GPa; Poisson ratio, 0.33.

As shown in Fig. 5, comparing the first to sixth order mode shapes before and after optimization, it can be seen that although the elastic coefficients of torsional spring and linear spring decrease with the decrease of the thickness , the increase of ligament thickness increases the overall stiffness of structural cells, so it is very important to ensure the ligament strength from the design of the hexachiral structure.

This study is partially supported by the State Key Laboratory of Ocean Engineering. Such support is gratefully acknowledged by the authors.