Copyright © 2020 Chenxi Wu, et al. This is an open access article distributed under the Creative Commons Attribution License, which permits unrestricted use, distribution, and reproduction in any medium, provided the original work is properly cited.

Rolling bearing plays a key role in rotating machinery. It is necessary to monitor rolling bearing condition and identify its fault to avoid accident [1-3]. The state information of rolling bearing is usually described with high dimensionality data consisting of multiple characteristics in time and frequency domain [4-6], which contains redundancy and interference, and exists nonlinearity. Therefore, several works have been explored to remove such disturbance and obtain low-dimensional sensitivity features for better accuracy and efficiency of rolling bearing fault [7, 8].

Different from above methods, local coordinate weight reconstruction (LCWR) manifold learning is proposed to reconstruct local coordinates by weight coefficient, so as to extract global low-dimensional sensitivity features for improving fault diagnosis capability of rolling bearing. The following is as below: Section 2 proposes LCWR for coordinate reconstruction, Section 3 validates LCWR and Section 4 is conclusions.

where is a mean matrix of , is a unit column matrix of length , and is a by unit matrix.

Thus, holds the most important geometric structure information in .

Suppose is the local low-dimensional coordinate of . Build the affine transformation between and :

The local reconstruction error is written as:

where is a local affine matrix, is a mean matrix of , is a local reconstruction error matrix.

where denotes the weight coefficients of the th nearest neighbor in , and denote the geodesic distance from to the center of and the mean square error of respectively, and is adjustment parameter.

Then is rewritten as:

where is a weight coefficient matrix, .

Fix and minimize to preserve as much local information as possible, namely:

Minimize the sum of all neighborhoods reconstruction errors to obtain the global low-dimensional coordinate :

where is the global low-dimensional coordinate of , , is a selection matrix, , is the subscript of nearest neighbors of .

It is equal to solve differential equation:

LCWR is summarized as follows:

(1) Look for neighborhood. Local neighborhood of each sample () is found by k nearest neighbors.

(2) Extract local coordinates. Projection matrix and local low-dimensional coordinate matrix of each neighborhood are obtained according to Eq. (2) and Eq. (3), respectively.

The flow chart of LCWR is shown in Fig. 1.

Experimental data is from the bearing data center of Case Western Reserve University. Four types of bearing sates under speed of 1750 rpm and load of 1470 W, i.e. healthy state, outer race fault, inner race fault and ball fault with defective size of 0.3556 mm are considered. There are 48 samples for each state and total 192 samples for all states. Each sample acquired at 48 kHz includes 2048 points in length.

As shown in Table 1, 12 time-domain statistical indicators and 8 frequency-domain statistical indicators are selected to constitute a 20-dimensional sample to characterize the bearing state. An original sample signal is decomposed into eight sub-band signals by three-layer db8 wavelet packet decomposition, and the ratio of the energy of each sub-band to the total energy of all sub-bands is taken as the frequency domain indicator. That is, , , is the energy of sub-band signals. Thus, a high-dimensional feature matrix is created. 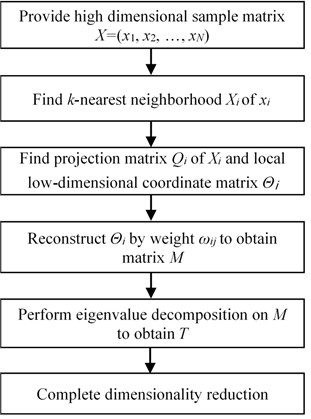 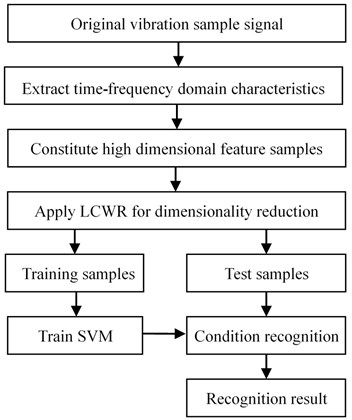 From the recognition rate about the nearest neighbor number in Fig. 3, there is the maximum rate 96.43 % at 8. The role of on recognition rate is carried out by influencing the intrinsic geometry structure of high-dimensional samples, the close relationship between similar samples and the nonlinear dimensionality reduction ability of LCWR. If is too small, LCWR can’t maintain the intrinsic geometry of high-dimensional samples and close association between similar samples. If is too large, it weakens the nonlinear dimensionality reduction capability of LCWR. Hence, the low-dimensional manifold structure hiding in the high-dimensional samples can be found to the greatest extent and achieve the maximum rate at the optimum value 8. However, due to the comprehensive effect of different factors affected by , the recognition rate fluctuates and there are multiple turnover points rather than a monotonous trend. 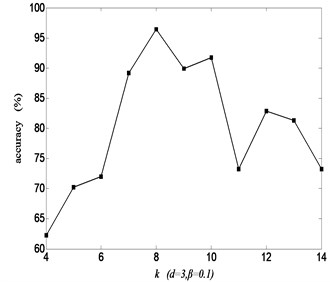 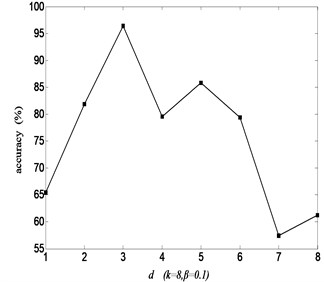 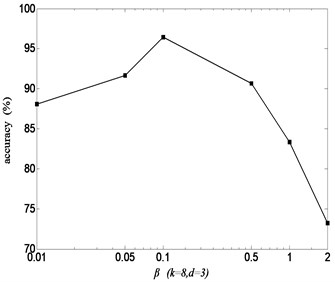 The three-dimensional sensitive features of bearing high-dimensional characteristic samples reduced by LCWR according to the optimized values of 8, 3 and 0.1 are shown in Fig. 6. After dimension reduction, four kinds of bearing samples have no intersection and overlap. Each of them has its own clustering center. The clustering effect and global geometric structure are objective, displaying a distinct manifold structure. 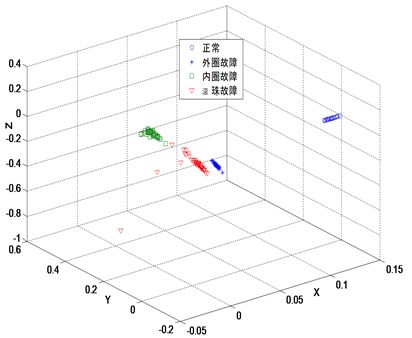 LCWR is compared with LTSA, locally linear embedding (LLE) and principal component analysis (PCA) to verify its dimensionality reduction effect. The dimensionality reduction results of LTSA, LLE and PCA are shown in Fig. 7, Fig. 8, and Fig. 9, respectively. Generally speaking, the reduced dimensionality samples via these methods have different degrees of intersection and overlap, poor clustering within class, lack of clustering centers. It is difficult to mine the essential characteristics of the bearing state and the differences between classes. Although LTSA and LLE find the manifold structure of high-dimensional samples, they are unable to expand the gaps between dissimilar samples in neighborhood. PCA belongs to one of linear statistical distributions without considering the local structure of the samples. It makes the intraclass aggregation poor and the differences between classes unclear, which fails to reveal the non-linear manifold structure of the bearing state as shown in Fig. 9. 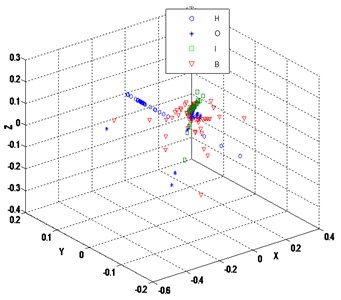 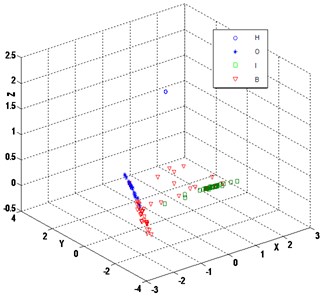 Combining its weight coefficient with local coordinate’s permutation, LCWR enhances the intraclass aggregation and the differences between classes, overcomes the shortcomings that LTSA and LLE can’t enlarge the gaps between dissimilar samples in neighborhood, simplifies the dimension while retaining the low-dimensional principal characteristics of high-dimensional samples, accurately reflects the relationship between signal characteristics and the bearing state, and effectively distinguishes four kinds of bearing states. As shown in Table 2, the features extracted by various methods are sent to SVM and the recognition rate of LCWR reaches the highest 96.43 % despite a little more time to run LCWR than LTSA, LLE and PCA as shown in Table 3. Therefore, in contrast to other dimensionality reduction methods, LCWR can achieve higher accuracy and prove its effectiveness. 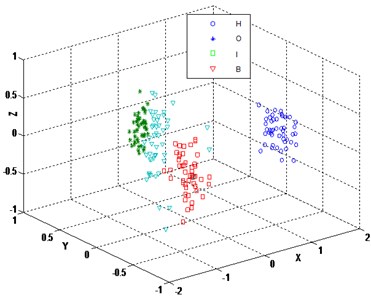 Besides, it can be founded that recognition rate of manifold dimensionality reduction using LCWR, LTSA, LLE and PCA (all greater than 90 %) is higher than that of the non-dimensionality reduction method (only 84.72 %). It is further proved that these manifold learning methods can filter redundancy and interference of the high-dimensional features and extract the intrinsic low-dimensional manifold characteristics, which can significantly improve the recognition rate of the bearing state as shown in Table 2. Meanwhile, these manifold learning methods except LCWR consume less time and get better recognition efficiency.

The work was supported by A Project Supported by Scientific Research Fund of Hunan Provincial Education Department (20A107), Project of National Natural Science Foundation of China (51875193) and Xiangtan guiding science and technology plan project (ZDX-CG2019004). The authors thank all reviewers for their valuable comments and constructive advice on this paper.