Copyright © 2021 Xiaojiao Gu, et al. This is an open access article distributed under the Creative Commons Attribution License, which permits unrestricted use, distribution, and reproduction in any medium, provided the original work is properly cited. 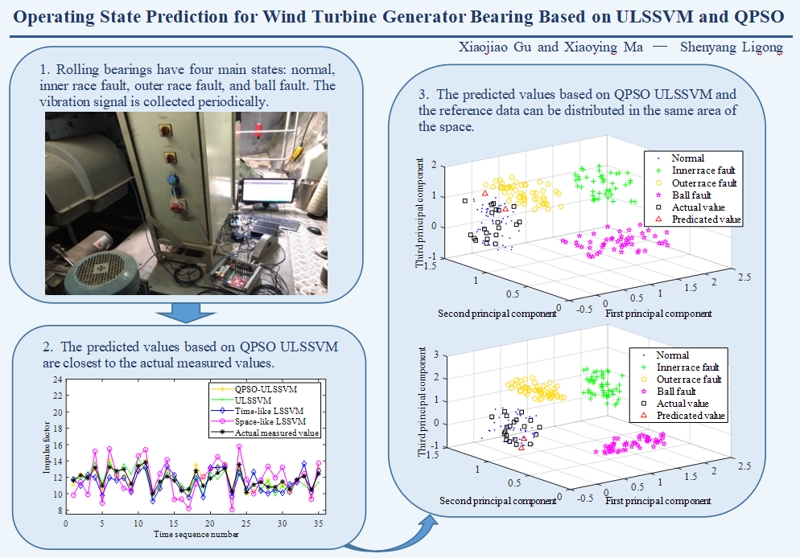 In this research, an operating state prediction method for wind turbine bearings based on united LSSVM and QPSO is proposed. United LSSVM includes time LSSVM model and space LSSVM model. QPSO is used for parameter optimization of the models. The weights of time LSSVM and space LSSVM are determined by the improved D-S theory. The proposed method can improve the accuracy of the predicted values. The mean absolute error, the mean absolute percentage error, and the root mean squared error can be reduced. A case study shows that the prediction results based on this method can realize the prediction of the operating state of the wind turbine bearing.

LSSVM is an improved algorithm based on support vector machine (SVM). Equalization constraints and least squares loss function methods are introduced. The optimization problem becomes a linear equation. Quadratic programming problems are avoided. The complexity of the algorithm is reduced. The calculation speed of LSSVM is faster than SVM [18-20]. The detailed steps are as follows:

(1) Construct the linear equation: According to the basic principle of Structural Risk Minimization (SRM), the final training target can be expressed by the following:

where is the weight vector. is the regularization parameter that controls the degree of penalty for errors. is the kernel function. is the offset. is the variable representing the error.

(2) Construct Lagrange function: is introduced as a Lagrange multiplier, . Lagrange polynomial which is dual to Eq. (1) is constructed as:

where is the kernel width.

For more detailed information about LSSVM, readers can refer to [18-20].

In order to improve the accuracy of the characteristic parameter prediction model and avoid the blindness of parameter selection, the quantum particle swarm optimization algorithm is used to optimize the kernel parameter and the penalty parameter of the LSSVM model. This process is a multi-parameter global optimization problem. QPSO is a probability optimization algorithm based on the principle of quantum computing. In quantum space, the properties of particles have changed in essence. This allows the algorithm to search in the entire feasible area. Therefore, the global search capability of QPSO is far superior to PSO. The detailed steps are as follows:

(1) Set the initial parameters: Including number of iterations, number of quantum particle groups, dimension and optimization range, etc. The particle position vector is randomly initialized according to the defined range.

where is the current number of iterations. is of the -th particle. is the number of particle groups. is the particle position equation at . is a random number in the range of 0-1. The probability of ± taking + or - is 50 % respectively. is the contraction and expansion coefficient.

D-S theory is very effective for most data and information fusion, but when the evidence information is highly conflicting, it will produce results that are contrary to intuition. In response to this limitation, an improved D-S is proposed. The new method first assigns a weight to each evidence and uses the “discount rate” to adjust the basic credibility of all propositions in the identification framework. Then the traditional D-S is used for synthesis. This method preprocesses the evidence. It draws on the paradox elimination thought of adjusting reliability assignment.

(1) Generate mean evidence: The generation of mean evidence can be realized by eliminating paradox thought in the literature [21]. The mean evidence is represented by . The -th element of can be obtained by Eq. (7):

where is the number of information sources. is the singleton of the identification framework .

(6) D-S synthesis: The traditional D-S is used for evidence synthesis.

The weighted form of the combined function is obtained by the following:

Take the prediction process of a certain characteristic parameter as an example. The concrete steps of the parameter prediction scheme based on ULSSVM, QPSO and improved D-S are as follows:

(2) Collect the test data of all characteristic parameters at time . The collection results are . SLSSVM is used to obtain the fitting map . is used to predict the value of at by Eq. (13). QPSO algorithm is used to optimize the kernel parameter and the penalty parameter of the LSSVM model. The prediction result is represented by .

(4) The weight values and in Eq. (15) are determined according to the actual measured value of the characteristic parameter at .

(5) According to the calculation results, the final prediction model is determined.

The final prediction model will be used to predict the value of at time . 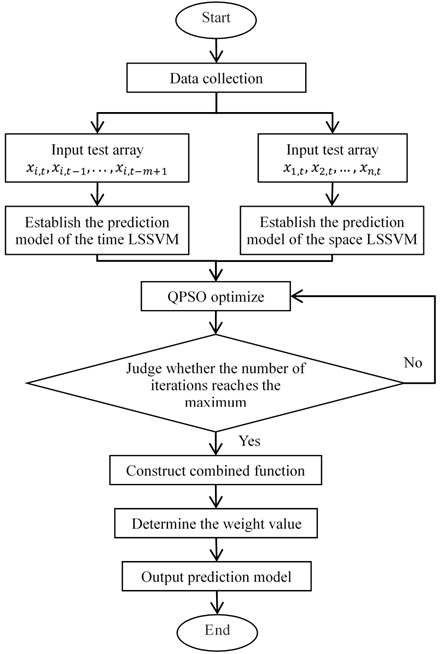 4. Bearing parameter prediction based on ULSSVM

The mean value is the average value of all signal amplitudes. It can be expressed as:

The rectified mean value is the average of the absolute values of all amplitudes. It can be expressed as:

The variance is the average of the square of the difference between the amplitude of each signal and the average of all signal amplitudes. It represents the dynamic component of signal energy. It can be expressed as:

The RMS calculation process is to sum the squares of all signal amplitudes and take their average. Then take the square root of the calculation result. The root mean square is also called the effective value. It can be expressed as:

The kurtosis is used to describe the sharpness of the waveform. It can be expressed as:

The form factor is the ratio of the RMS to the rectified mean value. It can be expressed as:

PAR is the ratio of the peak value to the RMS. It represents the extreme degree of peaks in the waveform. It can be expressed as:

where is the peak value of the signal.

The kurtosis factor is used to describe the smoothness of the waveform. It is the distribution of variables. It can be expressed as:

Fig. 2. Characteristic parameters of bearing vibration signal: a) the kurtosis and b) the impulse factor 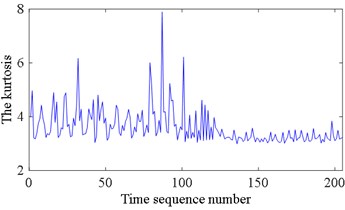 To evaluate the effectiveness and exhibit the superiority of QPSO ULSSVM algorithm in the prediction of characteristic parameters, the kurtosis and the impulse factor are predicted. TLSSVM, SLSSVM, ULSSVM and QPSO ULSSVM are used to predict the characteristic parameters separately. The mean absolute error , the mean absolute percentage error , and the root mean squared error are selected to evaluate these four methods. The expressions are as follows:

where is the number of samples. is the measured value. is the prediction value.

The evaluation values of the prediction results are shown in Table 1, which can show that all of the four prediction methods can predict the characteristic parameters. This demonstrates that the bearing characteristic parameters have specific variation trend and could be predicted. Furthermore, the method based on QPSO ULSSVM yields the best accuracy, significantly higher than TLSSVM, SLSSVM, and ULSSVM. This will provide help for operating state recognition.

Fig. 3. Predicted results of characteristic parameters: a) kurtosis and b) impulse factor 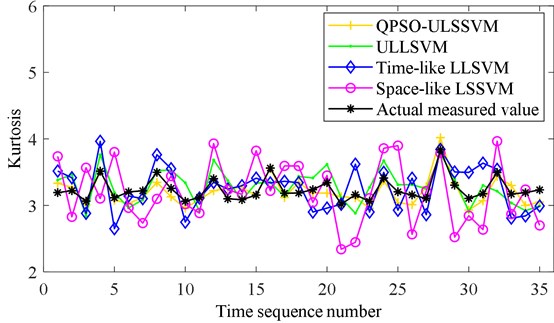 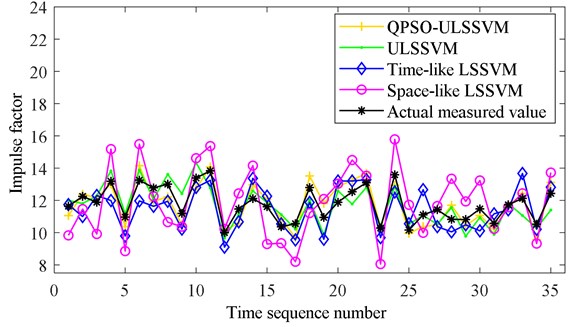 To verify the proposed method, bearing fault prediction is implemented. The vibration signal collection of the generator bearing is shown in Fig. 4. It is collected in the wind turbine nacelle. The acceleration sensor is installed on the bearing saddle. The vibration signal is collected periodically. Rolling bearings have four main states: normal, inner race fault, outer race fault, and ball fault. Collect 50 sets of vibration data for bearings of the same model in these four states, respectively. These data are called reference data. 10 characteristic parameters of each set of vibration data are calculated, respectively. The results of each state can be formed into a 50×10 matrix. This matrix is used as the reference matrix. 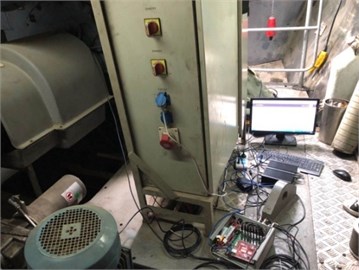 Fig. 6. Three-dimensional classification diagram of the prediction result based on QPSO ULSSVM

Fig. 7. Three-dimensional classification diagram of the prediction result based on LSSVM 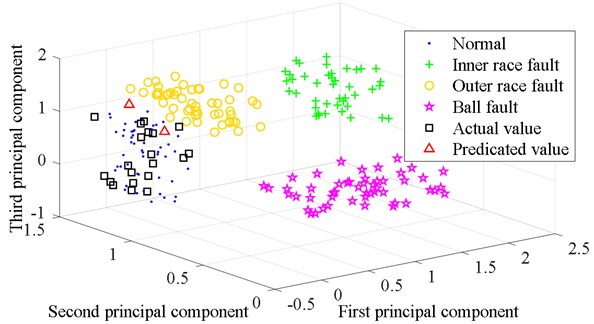 In this paper, ULSSVM and QPSO is used to predict the operating status of the wind turbine bearing. The observations and conclusions of the study are summarized as follows:

1) ULSSVM, a novel parameter prediction method, is proposed to effectively predict the operating state parameters. The results show that the new method is better than the TLSSVM and SLSSVM methods.

2) ULSSVM combines the time LSSVM and the space LSSVM. Improved D-S method is used to determine the weight of each model. It helps ULSSVM achieve better results in the parameter prediction of wind turbine bearing.